Jeez; the first time I saw this, I immediately thought forgery (no accusation to the ebay lister; just a gut), but the more I look at it, I think it may be genuine.

Faults include the 3"x5" card - it doesn't help to establish being genuine, but it shouldn't necessarily hurt either. The signature is very strong - in that the strokes are done with confidence and the sig looks fairly similar to my later signed books ('92-'93), but there were some really imprecise signatures from his last years. This one is very precise, and it is missing the usual characters that Buk omitted.

Also, the dogs tail points up and away to the left; most of Buk's dog's tails are straight up to the sky. And the snout is all wrong. It looks like an alligator; Buk normally drew dogs with a blunt snout. The eye looks odd as well, but I can't convince myself that this is a forgery. In fact, I've gone from 100% forgery to 99.9% genuine just by looking at it for a good while.
Last edited: Jun 14, 2014

Founding member
Trust your gut. Looks wrong to me. Are there any examples of Bukowski signing cards like this one?

My gut said fake when I saw it a few days ago, but there are others here who know technicals that I am not privy to.

You are right. The sig looks good, but the dog looks all wrong. May be good or bad, but not worth taking the chance...

I'd tend to agree about it likely being a forgery, but SOLELY based on the dog's tail not going up straight.

I've seen many legit signatures, that didn't look very typical.
I've also seen a couple of strange dog's noses and even eyes. All these wouldn't make it.

But the tail is a valid feature. Of all the billions of Hank's dogs, I can remember only 6 cases, where their tails didn't go up straight. Founding member
At the risk of educating potential forgers, you also rarely ever see a forward slant on a Bukowski signature. If you look at the thousand signatures we have to compare it to, he almost always tilts the paper and then signs in a straight line. If you were copying one or two examples you might mistake that skewed paper with a forward slant in the signature.

Any signature on a 3x5 card is 100% suspect to me unless there's some firsthand evidence of the signing. It's like a bookplate - such a convenient vehicle for fakery and fuckery.

As for the dog's tail, ever see a dog take a shit without getting their tail out of the way? That drawing's just true to life. ;)

There's also something to be said for so many of us having an initial reaction that it's not right.

Moderator
Founding member
I took one look and I would not buy it for $5. That is all.

Edit: Seller - if you set the price to $4.99 prepare to be disappointed.

having the tail STRAIGHT UP is having it out of the way, isn't it?

to everything else: yes.

Founding member
Yes, that's what I mean. It isn't a characteristic Bukowski dog, but then his dogs aren't normally shitting. 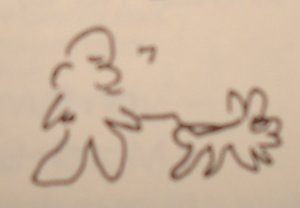 Sorry, the actual drawing is quite small, so it's a bit blurry.

And on the same mag, here's Buk's signature: 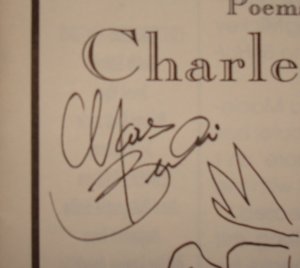 Interestingly, the tail on the "h" becomes the backbone for the "B," which is unusual. But the style of the signature is quite similar to that on the 3"x5" card. But mjp makes an excellent point about the slant in that signature. It's a forward slant. So, there you have it.

Neither the dog nor the signature look legit to me.

mjp said:
There's also something to be said for so many of us having an initial reaction that it's not right.
Click to expand...

That reminds me of Malcolm Gladwell's book, Blink, which is about the subconscious process of intuition. One of the stories in it was about a Greek statue that was purchased by the Getty Museum for about $10M. When they had brought in their experts, they concluded that it was legit because the marble came from the right area, the calcite seemed to have built up over thousands of years, etc. Everything was geologically and technically correct. However, 3 art historians looked at it independently and each one said that their initial intuition was 'fake' because it just didn't feel right - even though they couldn't point to one particular thing that was "wrong." In the end, after further investigation, it was found to be a fake.

My point is that sometimes we don't even need to break apart the technical aspects of the signature. If several of us look at it and say something looks off, it probably isn't legit.

I have this same problem with transexuals sometimes...

Tell us all about it...er...on second thought, you better not. :D

Purple Stickpin said:
In fact, I've gone from 100% forgery to 99.9% genuine just by looking at it for a good while.
Click to expand...

I have that feeling too. I may well be genuine, but it ain't pretty :)

Blink was a good read. I'm on a vintage guitar forum where lately we've been talking ad-nauseam about authentication because (apparently) one of the worlds leading experts has stepped on his own dick (not quite proven yet) on a $300k guitar deal that involves Jim Irsay (the buyer): owner of an NFL franchise.

Most of us know our shit very well. The expert went in with high powered loupes and three spectrums of light and a full set of scientific tools and templates; he spent hours looking into the cavities and crevices of said $300k guitar. He gave his blessing. The problem is that the rest of us (less esteemed than said big-shot) "experts" took one look and we knew it was a forgery. Later it was revealed that the guitar had been "found" by two of the leading forgers and passed off as real to guitar center Hollywood. When photos of the innards were revealed, they seem to prove that it's a fake, and the leading expert has vanished from the internet.

I must ad this: the expert in that case IS in fact an EXPERT in authentication. I think the moral of all this is that sometimes one looks too closely at details and ignores his first "blink" or gut reaction. This clouds his judgement because the forger knows that he must nail the "scientific stuff" first.

Founding member
mylespaul.com? Who are you over there?