i'm a big fan of abandoned man-made places. just something creepy and also serene and fascinating about them.

someone on facebook linked to some photos they took at the abandoned 'california city', as part of obscura day 2010, which got me thinking about this stuff for the first time in a while.

atlas obscura seems like a pretty rad site for finding this stuff, as well as a ton of other cool and unheard of places to visit. i'm thinking of making an appointment to visit this place sometime soon. i like abandoned things as well...a friend of mine sent me this link which features abandoned places around japan:

and in birmingham, alabama, there is sloss furnace, which is a very interesting place to visit:
http://en.wikipedia.org/wiki/Sloss_Furnaces 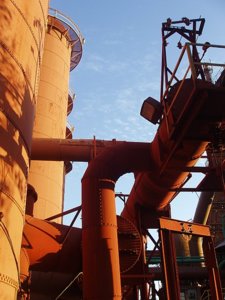 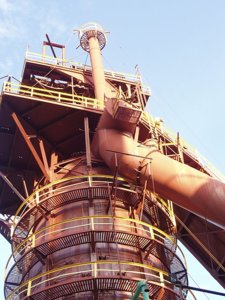 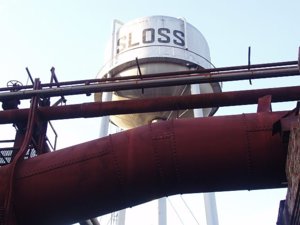 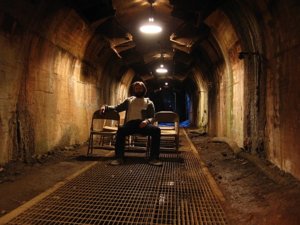 I have a bunch of Asbury Park in New Jersey from about 10 years ago before they started to fix it up, as well as a slaughterhouse in New York that they just finally knocked down. Unfortunately they were all taken on 35 MM film, so eventually I'll have to scan them. But yeah, black and white pics of abandoned structures make great pieces.

james said:
in birmingham, alabama, there is sloss furnace, which is a very interesting place to visit:
http://en.wikipedia.org/wiki/Sloss_Furnaces
Click to expand...

I heard about Sloss Furnace while watching Ghost Adventures on the travel channel. Very interesting and very spooky.

there are middle-of-the-night tours of the paris metro system that take you all the cool abandoned stuff down there. the thing with the paris metro that makes it unique among any other subway system i've ever ridden is that the tunnels are covered in graffiti, including the abandoned stations and subway cars. so if you're riding the train, sometimes you'll shoot past a station that looks like all the other ones, except the lights aren't on and every square inch of it is covered in graffiti. it's really cool - the tours are hard to get on though, since space is limited, and they're kind of secret, so you have to find out how to sign up first.

james said:
i like abandoned things as well...a friend of mine sent me this link which features abandoned places around japan:

and in birmingham, alabama, there is sloss furnace, which is a very interesting place to visit:
http://en.wikipedia.org/wiki/Sloss_Furnaces
Click to expand...

Nice pictures. I lived in Japan in the 50s so the amusement park looks like the style we rode on in those days.

The last picture of the (James is that you?) bearded guy in the tunnel looks like a place to interrogate the enemy in a low budget movie.

I visited a large house where there had been many large parties that I attended years before. When I went through it the roof had burned off by a girl I knew. She died shortly after the fire -drank to death. Nice house.

Gerard,
yep, that's me...and it would totally be a perfect place to shoot some kind of horror/thriller movie. i can't imagine being there at night though. too scary.

Zenguru,
yea, i saw that episode too...specifically because they were at sloss. i wouldn't be surprised if that place had some kind of spriits floatin' around...apparently, there used to be an slavedriving evil foreman there that met his end by falling/being pushed into some molten steel lava pit...

There used to be an abandoned insane asylum at walking distance from my house in Philadelphia. Had a hell of a time growing up and exploring the many buildings and underground tunnels.
Here's a picture I found taken from Byberry, the asylum. Lately I've been going to an abandoned school to hang on the roof and play basketball. There's actually a basketball court on the roof but there's only one hoop still in tact. It's just astounding playing basketball 6 stories from the ground at night with an amazing view of Center City Philadelphia.

I don't remember if someone here posted this before or if I just stumbled on it.

Yesterday morning the Sundance Channel played a documentary called The Nuclear Comeback. I tuned in right when they were touring Chernobyl.

There is a show on The History Channel -Life After People.

People around the greater Vancouver area would ask me, because they knew I might know, about a spot they'd come across in Campbell Valley Regional Park, the old Langley Speedway site. It never got plowed under after it closed in 1984. So they'd described it in strange ways wondering what it used to be. I'd tell them, even though I hadn't visited the area (even though I'd walked through portions of the park over the years) since it closed. The last few years I have gone back. It has been "refreshed" a bit. A few reunions held there, etc. Ultimate plans? "Unknown", those in the know say, with a wink.

james said:
apparently, there used to be an slavedriving evil foreman there that met his end by falling/being pushed into some molten steel lava pit...
Click to expand...

Did that happen on his lunch break or something? I think one of the Ghost guys said that. I'm just wondering if I ever go there and smell a sandwich by the place where he fell.

The Sloss Furnaces had to be kept burning throughout the night, seven days a week, and so a manager of the so-called graveyard shift had to be found; but who would want such a job where his workers were the most desperate, often immigrants, and where he would watch over burning magma until the daylight? Such a man was found in the person of James "Slag" Wormwood.

By all accounts Wormwood seemed to be tailor-made for his post, lording over his workers like Satan himself. He drove them hard, denying them rest or breaks, pushing them to impress his employers and to feed his own sadistic need. He forced them into dangerous tasks, all designed to increase productivity. All told, forty-seven men lost their lives to his disregard. Many others were critically injured and robbed of their livelihood. It wasn't long before the workers had enough of Slag. One night in 1906 Slag stood in a spot uncharacteristic of him, on top of "Big Alice" the largest blast furnace in the plant. He reportedly lost his balance after becoming dizzy from the methane emissions and fell into the mouth of Hell, his body incinerating on contact with the molten metal. It was interesting to note that, during his employment at the Sloss Furnaces, Slag had never once set foot on the high walkway. It led some to believe that the workers had murdered their employer, but it was more an act of self-defense. Despite this commonly held belief, none of the workers were ever brought to trial.

that came from here:
http://boards.nbc.com/chillertv/lofiversion/index.php/t981.html

Me and my mates used to drink in an abandoned old folk's home, was amazing. We'd order Dominos and munch and drink and skate about it and stuff. Then the others burned it down. I was quite gutted by that.

Also, me and my mate Ben walked around an abandoned steelworks and factory which was awesome, pretty creepy. I love abandoned places, they influenced my ambient music project. They're dead cool and chilled out.

Despite looking a little shoddy, this site is rather excellent
http://www.derelictlondon.com/home_page.htm

The grafitti section is great. Thank you, rjwink666.

rjwink666 said:
Despite looking a little shoddy, this site is rather excellent
http://www.derelictlondon.com/home_page.htm
Click to expand...

This site is truly brilliant. Thank you, rjwink666. That is exactly what I love about habituated areas.

When I was young my friends and I would go and hang out at the old TB hospitol in Lima, Ohio. I don't care what anyone has to say, THAT PLACE IS HAUNTED! Even lookin back at pictures and video 20 years later, still gives me a funny feeling in my skin....................http://www.forgottenoh.com/LimaTB/limatb.html
This video is pretty cheesy but you can see what the hospitol looks like today. When we used to go there it was not nearly as dilapidated........ The creapiest thing about the place was that it has 2 hallways right next to eachother in sections, so when you went through what looked like a room entrence, you were popped into another hallway. It was shaped like a horseshue so when you entered one side the only exit was at the opposite end of the building. That is not quit so convenient when you are in the middle and start hearing loud noises chasing you....Im tellin ya...never so scared in all my life! I don't remember my feet touching the ground!

But if the ghosts were all sick with TB, how fast could they run, really ?;)

Founding member
Justine, you must have loved the front page of the LA Times today...
the Tempelhof Airport in Berlin
GERMANS LET LOOSE AT NAZI AIRPORT,
'Grand Schemes for the Facility once used for the Berlin Airlift give way to a Big, Unplanned and very Popular Park.' The disused multi-storey car park used in the classic Michael Caine Brit-flick 'Get Carter' is currently in the process of being demolished. I just thought I'd mention it in case any of you guys wanted to travel here before it was too late ;)

Used to be an abandoned rail station on the outskirts of Buffalo, N.Y., the place haunted me everytime I rode the train to Toronto past it. Wonder if it still stands?

Founding member
That first picture of the Wurlitzer building has a nain rouge sign on it, which would seem to have something to do with "devil's night" in Detroit? Maybe someone intends to burn it down. They are crazy in that city you know.

It's amazing that an old Packard is still parked behind the Packard plant...or is that just someone being ironic?

rjwink666 said:
Despite looking a little shoddy, this site is rather excellent
http://www.derelictlondon.com/home_page.htm
Click to expand...

This is a great site. Saw a number of places I remember from 15 years back. Quite something. Thanks for the link! Amiri has split the building...

Supporting Membership has left the building

Yet Another Legend From Hollywood Park...