Over 1000 posts
With the recent acquisition of Darkness and Ice, I have confirmed my place as BSP book collecting weirdo No. 1.

Oh well, you gotta have a hobby, right?

Here they are with a match book to give a size reference. Sorry about the crappy photo. My wife broke yet another digital camera. (That's 4). 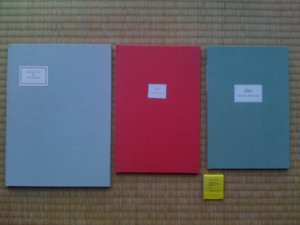 Now... anyone have a copy of Cornered they want to let go for five bucks?

Billions served
They may call you a weirdo, but I call you normal.

Shit, maybe that makes us both completely insane.

Over 500 posts
Those Burn Again Press books are a complete rip-off! Burn again is right!

But I have all four.

Actually, here's the really retarded thing - I don't own ONE New Year's Greeting because I've always felt they were overpriced items. Can someone please explain?
Last edited by a moderator: Aug 3, 2013

Your Host
Moderator
Founding member
Billions served
If it were easily explainable it would be no fun.

Founding member
Over 100 posts
I received some random new years greetings as slip in extras
on the couple of book orders from BSP.Are they hard to find now or expensive?

Billions served
The wraps copies generally are worth about $10, maybe $20, although many are priced above that. The posthumous hardcovers are probably worth about $35 or so, and the signed hardcovers generally are worth about $100-$125 (for numbered; those that are lettered; add 25% or thereabouts). There was also 1969's If We Take, that was only done in wraps in both signed and unsigned versions (green thread for unsigned; red for signed). The unsigned version is sometimes offered in the $75-$90 range (not sure if it sells) and the signed version has commanded up to near $200. 1976's The Last Poem and Tough Company (Diane Wakoski contributed The Last Poem) is a bit harder to find and commands a bit more than the more common editions.

bospress.net said:
Shit, maybe that makes us both completely insane.Bill
Click to expand...

Dropped. Dropped. Lost. Fried the battery (so technically not all broken, but still useless to me now).


nymark said:
Those Burn Again Press books are a complete rip-off! Burn again is right!But I have all four.
Click to expand...

Ha! So you got Red, Well done. Yes they are a re a rip off, but so is dental surgery and I know which one I'd prefer to spend my $ on.


mjp said:
If it were easily explainable it would be no fun.
Click to expand...

You've gotta at least consider that they're signed. I mean... that's good at least. If you were dropping down big cash on something that wasn't signed... then you'd be crazier.

Which is not to say that you, and we, are not crazy. We certainly are. Isn't it fun?

Over 1000 posts
soon i will drop big cash on heat wave... it's not signed (well, but bukowski at least), but i still want it... more than a lot of books that are signed, actually.

Over 1000 posts
Heat wave is nice, but I enjoyed Horsemeat more... the writing's better I think.

Over 1000 posts
horsemeat is a fantastic book, too. the thing that sells me on heatwave is that i like ken price's art a lot, especially now that i'm having lots of LA nostalgia. plus, horsemeat is 3x more expensive, usually.

Over 1000 posts
Is Horsemeat photos and poems? I've only seen the cover before, that's about it...

Over 1000 posts
Yup.
It's reproduced (sans photos) as the first section of war all the time.

LickTheStar said:
Is Horsemeat photos and poems?
Click to expand...

it's one of the cooperations of Hank and Montfort.

Billions served
Here are a few shots from Horsemeat for y'all. I'm assuming it's cool to post these, since the original prints in the books have all been long sold. If not, mods, delete away with my apologies. Moderator
Founding member
Billions served
thanks, purple. I'll probably never hold Horsemeat in my hands, so it's good to have a sneak peek.

Billions served
So I guess it's cool. Here are a few more: Over 500 posts
One of the few I don't own; that bathroom shot is the bomb. Thanks PSP. Fucking awesome, man, just awesome.

ROC said:
It's reproduced (sans photos) as the first section of war all the time.
Click to expand...

But, War All The Time, is not divided into sections! Could you tell me where Horsemeat ends in War..? At what page number or at which poem title?

Purple Stickpin, thanks a lot for all the Horsemeat pics! They're great!
Last edited by a moderator: Dec 2, 2013

Billions served
You're welcome, Bukfan. My pleasure. I tried to make them good enough to look at without being good enough to pirate (crooked edges, etc.).

Horsemeat is listed in the table of contents of War All the Time. Pages 36-63. It is divided into 20 sections: I through XX.

Purple Stickpin said:
Horsemeat is listed in the table of contents of War All the Time. Pages 36-63. It is divided into 20 sections: I through XX.
Click to expand...

That's it. Thanks PS and sorry I wasn't clearer bukfan.

Billions served
The first of those photos is also from Horsemeat (or something very similar). The one at the betting window is Buk collecting as opposed to the one in Horsemeat, where he is dropping a bet. I like that one you posted better!

Billions served
Aha! So the first pic also has a "cousin" in Horsemeat? That's two pics so far which has "cousins" in Horsemeat!
Last edited by a moderator: Dec 2, 2013

Over 1000 posts
That's the problem I have with the Montfort/Buk books; there just aren't that many photos. So if you have Photos 77-87, Photos 77 - 91, Horsemeat, Bukowski, you are going to see the same sort of shots over and over again.

Billions served
Right! That's rather annoying. Perhaps Montfort should'nt have published all those "cousin" shots. Not in such expensive books anyway. You don't want to pay a lot of money to look at similar pics...
Last edited by a moderator: Dec 2, 2013

Over 1000 posts
Thanks for the shots, PS. Looks like an interesting book. I like that the text is available elsewhere.

Does the final BSP photo book have EVERYTHING. Or do you have to spend thousands to get all the Montfort photos?