I knew this Van Gogh site from long ago, but this was an inspirational reminder. Thanks.

Here is a "set" of paintinga I've had my eye on at a local antique shop for months. They dropped the price and I got them, much to the behest of the old lady! No idea who painted them as they arent signed but I love stuff like this that is just too ugly or too bizarre to not be interesting. Also a fan of badly done antique taxidermy. I want a very uncanny boars head at a local shop but I'm pretty sure I'd need a new house to hang it in, as well as live. 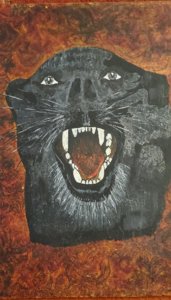 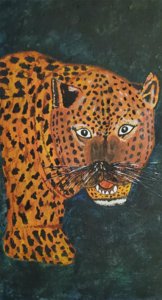 I just now saw this. It's funny to me, I guess. I know a bit about the genre and I remember when Outsider artists were being given cigarettes and blankets in exchange for 40+ paintings at a time. Many were still alive then. Traylor wasn't of course, but his work was affordable still. Though, even back then, dealers were selling that work for 1000x or more than they were getting the work for. If they paid five dollars, they were selling the work for $500 or so. Five dollars would be a lot to pay, as they were buying out their entire sheds. Artists like Mose Tolliver for instance. I don't know what his work goes for now--he's passed since and many pieces signed "Mose" by his kids aren't originals, but I bet even those are going for many thousands now.

Something that the article got wrong is that Carl Hammer was not the first to sell Traylor's work on the open market, but whatever. He's one of the first dealers to sell Outsider art in general, but not the first. It may have been Phyllis Kind Gallery, but I'm not sure. She was one of the first to show any Outsider artist in a gallery setting, like Rameriz, Wolfli, Darger, and Zinelli. I think she was doing that in the 70s. She had a gallery in Chicago in the 60s that she moved to NY.

I have a painting by Richard Burnside. I should see if it's worth anything. I knew this genre was getting popular in the early 2000s, but this is getting crazy now. There have been so many unscrupulous dealings in the Outsider art world, you don't even want to know. It feels like all the wrong people are making tons of money off artists who never get their fair share.

Anyway, I love Traylor. I wish I had one. I love Carl Zenelli too.

Hasn't it always been like this?
The famous contract signed on the hood of a used car where you sell all your work and your soul for an apple.

I just set up a new forum for artists (with mjp's help, of course) and need new members. Please come register and participate! We need you.

I just found out about Leonora Carrington. I had never heard about her before. I've been looking through her work a little and it looks very interesting. She seems really sincere in her approach to art, too.

Great! Will watch it later!

esart said:
I just set up a new forum for artists [...] CreativeSpark.art
Click to expand...

I've jumped in and can confirm the seriousness as well as the warm-heartedness you'll find there.

Some of ours here should definitely give it a shot.
Jocelyne, dgrey, theonlygoodpoet, PhillyDave: You'll be pleased.

Founding member
That joint opened on May 25th and already in the first ten days they've got 840 posts in 107 threads.

I don't think we had 840 posts here in the first three months.

Founding member
We still need more members though. I'm not sure where to get them from. I no longer have Facebook because I hated it there, but that was 2000 people I could have promoted to. Oh well. What can't ya do?

Founding member
i'll see if i can round up some fellow so-called artists to sign up.

I also don't have a Facebook for the same reason. I'm thinking a). sharing the link on my Instagram page as a story (it's not like I have a lot of followers or artistic friends, but maybe it could help) or b). reaching out to the people I know are into art personally and casually dropping the link.

Not sure, if you "need" more members. It's a lifely joint already and I can't keep up at all.
But it sure is a recommendation for any artist or creative working person.

Founding member
Thanks guys. Yes it's lively now. I just want to keep it that way. Roni, I am so sorry you can't keep up. I love all your posts so far!

esart said:
so sorry you can't keep up
Click to expand...

Dontcha worry. I can (more or less), at the very moment, but know this won't last.
Anyways, I am enjoying being a part and for now it feels like art is the voice in my head these days. So, thanks for the opportunity.

Founding member
me too. you know his stuff?

Moderator
Founding member
No. I had never heard of him before this.

Founding member
oh yeah he's one of my favourites. does amazing figures, portraits, landscapes, prints, everything.

google him if you get a chance. he's relatively obscure but worth digging into.

Founding member
here's a good article on him Founding member
here's the sotheby's page with vallotton auction stuff. auction sites - sotheby's, christies and most other ones - are
a goldmine for high quality zoomable images of the art. search any big name artist and you'll get to see not
just great quality images but work that can't be seen anywhere else. and then probably disappear into some
filthy rich person's private collection.

Founding member
here's the egon schiele page - and under it one of my all time faves by any painter. and done when he was
20 years old! it's interesting how many great artists were fully formed at such a young age - egon, dylan,
glenn gould, the beatles, so many more. not sure if that applies to writers equally. i'm not familiar with enough
of them. but i know bukowski was a late bloomer.

Thanks gray. Schiele is so kick-ass!
Even when you think you've seen so many, there's always new stuff coming up the alley.

Hint: In order to right-click and "save-as..." those pics, you'll have to turn off ALL cookies.

Founding member
if i could just paint one picture close to this before those birds come for me...