Hi,
This seems to be self published by Linda King or her son. What I can see is that it is published in Phoenix, AZ (Where they live). What I find odd, as a publisher myself is trying to sell a brand new stapled chapbook for $35. I sell mine for $5 and even then, it is a tough sell. Also note the description. If this is Linda King or her son, then it is an odd listing as they seem to go through an effort to look like an impartial seller of this "great" book and mention Bukowski how many times? If this is the author selling their book and they describe it as "These poems are some of the best I've read", then I feel like I'm being played.

It should also be said that I do not know and I'm not making any judgements. This book could be great, it just mentions Bukowski too many times and is priced a bit too high for me to buy it.

Also, I would bet money that Linda King is a forum member here. Has she ever posted that anyone knows of?

Yeah, I saw that too.
Made a lot of the same conclusions as you.

To me it seems sad that a relationship that you had many years ago for a relatively brief period should be the defining moment in your life.

I mean, your writing either stands up on its own or it doesn't. And to keep pumping air into the 'Bukowski and me' doll long after it should have been forgotten at the back of the closet is pitiable.

Founding member
yep, Linda King and her sister published Purr in the 70's. B was in five issues.

Yeah, $35 is too steep for a new chapbook. It is pathetic when some minor poet keeps mentioning that they had a connection with Bukowski long ago. Oops I'm guilty of that, but then I have no pride.

But it may be a good book. I like the drawings.

bospress.net said:
What I find odd, as a publisher myself is trying to sell a brand new stapled chapbook for $35. I sell mine for $5 and even then, it is a tough sell.
Click to expand...

Yeah, but these are "guaranteed to increase in value," so how can you go wrong? ;)

They probably will increase, and eventually they'll hit the $35 mark. But seriously, ultimately they'll be higher than that. Still, you feel like you're being taken advantage of by someone, starting off that high. I bought the second edition of her book of poems done with Bukowski (can never remember the title: "Your and My Sometimes Love Poems" ???) from Linda for $10 when it first came out. She wrote a nice, long, friendly inscription about how Martin was trying to suppress the book, or buying up all the copies, or whatever. Lately, I saw a copy listed at $200, same edition. Not bad. I'm hanging onto mine. I like that inscription.

Yes, but this is Gregor Books. His prices always are too high. This is no surprise. I can only guess that he is a collector that does not want to part with his books, so he prices them very high to keep people from buying them. He can then call himself a bookseller and write off his purchases as inventory while enjoying them. It seems like a great plan. Look at his prices just for fun and then compare them to other books for sale.

He will always price his books at about 50% over what anyone else is selling them for. Then when he lists a book where there is no other listed on ebay, he seems to smell blood and really ups the price to the obscene.

I paid $25 for my copy and it was probably fairly priced at that price. These show up on ebay from time to time and fetch about that. Anyone considering buying this book from him at $231 either needs to have their head examined, or they re just so rich that they don't give a shit.

To give you an example on the Gregor Pricing:

I have nothing against Dave Gregor. I just find his prices baffling. He seems like a good enough guy and there is no question that he is reputable in what he is selling.

Sorry about this long post that will probably only be of interest to the other collectors on the board.

bospress.net said:
He can then call himself a bookseller and write off his purchases as inventory while enjoying them. It seems like a great plan.
Click to expand...

Until the IRS starts asking questions.

I think that you have 3 of 5 years to start showing a profit before the IRS starts looking at it. That does not mean that they would or could disallow it. Showing a real attempt to sell books makes you a bookseller, according the the IRS. If you make an effort and it just does not make money, and you are having to work another job to keep the business afloat for 10 years, they will probably allow it. They would have to prove that the company does not function as a business and is, in fact, a hobby PRETENDING to be a business. Getting a business license, attending shows, listing the books on Abe, would all probably make the IRS believe that this is a real business.

Of course, I am not accusing anyone specific of this. I'm stating a generality that someone could be a book collector and could turn it into a tax deduction and if they were careful, could probably make it work well.

I used to do taxes and had a couple customers that owned a horse. They always would talk to friends who would tell them that if they pay $35 for a business license, that they can write off the horse as a breeder, even if they never actually breed the horse. That would only work if you made documented efforts to become a breeder. If you attended horse shows, had business cards made up, incorporated, had a website, put an ad in the yellow pages, this could probably work. Trouble is that most of these people just wanted to own a horse and were not willing to go through the charade to get the deduction.

I did have one person, though that spend so much on his horse that he was able to show a massive loss to the business (he would write off meals with his wife, because they would mention the horse at dinner) that he was able wash most of his income by using the massive loss in the "business". Will he get caught? Probably not. If he does get caiught will they ruin himn? Probably. Thankfully I was only working at A tax firm then and did not have to be the one that prepared or signed that return.

Apologies to those not interested in the US tax issues. I'll try to stay on topic!

Yeah... no aplogies needed. That shit was more interesting than Linda Kings poetry, that's for sure.
I actually never thought Gregor might be pricing that way for a reason....baffling is right.
Your theory looks good.

ROC said:
I actually never thought Gregor might be pricing that way for a reason....
Your theory looks good.
Click to expand...

...and I must admit (being a Real bookseller btw) I have to thank you, Bill, for this idea!
As you know I got one of the rarities on PBA lately, at a very fair price, but still FAR beyond my abilities (just couldn't resist - still suffer from it and will for some more months). But haven't thought of writing it down as a buy-in for the shop so far. (You also wouldn't believe, what these fuckers here charged me on customs-duty just to let me Get it into the country - I nearly could fly to SF and pick it up instead.) I'm pretty sure, I don't owe this state (Germany that is) Anything. So my conscience is clear as a baby's to do this.

What did you get?

You mean in that auction?

Was an oil-painting by Buk - selfportrait behind jail-bars. (was [+ is] o/course tapped in a special-edition book, but it was the Painting I was after.)
I love this sujet: feeling trapped and imprisoned in Life! (have done several self-portraits with this sujet myself, maybe that's why they easily hooked me on this one.)
The link is: http://www.pbagalleries.com/search/item174496.php?

Shit. That is nice, but was something that I could have never bought...

My wife would have changed the locks on my door...

Founding member
The better paintings are fetching higher prices these days, aren't they. Though you can still get an abstract for not much more than the strong painting editions went for 10 years ago. For example: http://cgi.ebay.com/ws/eBayISAPI.dl...MEWA:IT&viewitem=&item=250136585909&rd=1&rd=1

They're a bitch to display though, if you want to show the art. It took me a while to come up with a system to show the damn thing in a deep shadowbox frame. I couldn't bear to have it closed up on the shelf.

$231 for that Linda King book whose title I couldn't remember. I had the price right. My mind isn't gone yet.

High prices may be a way for a dealer to keep from selling books they love when the wife is pressing for cash. "Nobody's buying, baby! The market is dead!"

Rekrab said:
High prices may be a way for a dealer to keep from selling books they love when the wife is pressing for cash. "Nobody's buying, baby! The market is dead!"
Click to expand...

I must admit that I have used this excuse when books arrived and my wife wanted to know why they were insured for so much. "I got a great deal and am going to resell them!"

bospress.net said:
I must admit that I have used this excuse when books arrived and my wife wanted to know why they were insured for so much. "I got a great deal and am going to resell them!"
Click to expand...

Are you 100% certain your wife never read your poetical postings on this forum, Bill?

I can't even get her to read the books that I publish, so I think that my rambling posts on this forum are safe!

Ditto for me, Bill.

Are you kidding me David? At least she needs to read this great poem. 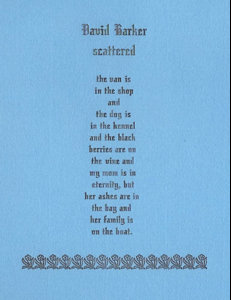 Reaper Crew
Moderator
Founding member
that is a good one. I have it, and my wife read it....

Thanks, Ponder. She has read that one. She reads them if I say "you ought to read this one" which I only do if I think it's one of my best, or there's something in it she ought to know is out there. But not the run of the mill poems. I guess it's on a "need to know" basis, kind of like national security.

PBA and the Linda King effect...

Bukowski/King - Me & Your Sometimes Love Poems