Founding member
Please note that Bukowski never criticizes Montfort the human being, but Montfort the artist. The did have a very good relationship and I think Bukowski considered Montfort one of his few true friends -together with Weissner, also a German guy. Weird, isn't it?

In the 1985 letter he discusses the forthcoming book -The Wedding, a true rarity- and he's not too unkind with Montfort photographs, but in the 1992 letter he really puts him down. 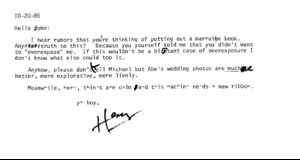 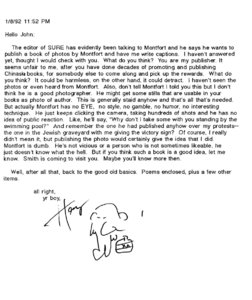 Founding member
"I hear rumors that you're thinking of putting out a marriage book." Wha? Did those two discuss these things or did Martin just put out whatever he wanted to, whenever he wanted to? Sounds like the latter.


cirerita said:
Please note that Bukowski never criticizes Montfort the human being, but Montfort the artist.
Click to expand...

Hmm. "Montfort is dumb." That seems like a criticism of the man, not the art.

Overall I wouldn't disagree with Bukowski on Montfort's skills as a photographer. There is something magic in a great photographer. A great candid photographer, I mean, which is what Montfort was/is. When I say magic, I mean like the early work of Diane Arbus or Mary Ellen Mark, when they photographed what they saw and didn't interfere with the scene (by posing people, manipulating lighting, etc.).

Of course, it could be that Bukowski wasn't the most animated subject to photograph. But it is true that much of Montfort's work is pedestrian. I recently revisited Shakespeare Never Did This, and a lot of those pictures are like tourist snapshots. But again, there's only so much you can do with a guy walking around or sitting in a chair.

I wouldn't say Montfort is "dumb." I certainly didn't get that impression when I spoke to him. But I didn't know him. And I doubt Bukowski really considered him to be dumb, or he wouldn't have spent so much time with him.

But here we (I) go speculating again. Heh.

Founding member
I think he says dumb in terms of artistic vision, that is, that he has no artistic vision. I don't think he means he's a dumb person, but a dumb photographer. Similar, but there's a difference.

Founding member
I guess I was going off the impression that the "dumb" comment gave along with the line that followed it; "Montfort is dumb. He's not vicious or a person who is not sometimes likeable, he just doesn't know what the hell."

Anyway, this isn't out of character for Bukowski. He turned on, alienated or pushed away everyone who was friendly with him at one time or another. How they reacted to him lashing out usually determined whether their relationship would continue or whether it would end.

mjp said:
He's criticizing Montfort's decision to publish a certain photo that Bukowski was worried (maybe rightly so) could be considered anti-semitic. So it looks to me as if he's criticizing MM's decision making, his common sense.
Click to expand...

Well, now I feel stupid. I remember seeing that picture and thinking that Buk was celebrating his temporary victory over death.

Founding member
Well, you have to read a lot into it I suppose, to consider it anti-semitic...you'd have to know it was a Jewish cemetery and that Bukowski was German, etc., etc., and honestly, that isn't the first thing that occurred to me when I saw it, but obviously Bukowski was aware of it, enough to ask Montfort not to publish it...

Founding member
I always thought he was giving the peace sign.

hoochmonkey9 said:
I remember seeing that picture and thinking that Buk was celebrating his temporary victory over death.
Click to expand...

Same here--or, that he was at peace with it. He looks happy. Most people are afraid of cemetaries, but there he is laying back and smiling and flashing the peace sign.

I didn't even know it was a Jewish cemetary...

Founding member
Yeah, that's what I mean - you'd have to read a lot into it. But the fact that he was nervous about it - when it's such a long shot to notice anything to be offended by - kind of suggests that it was talked about or joked about while they were making the pictures...