I'm curious to know when Buk started including his little man drawing on some of his signed material. I've seen several things from the 1980s that include this, and his use of it tapered off, probably in the later 1980s, but when did it start?

The reason I ask is that I have a signed copy of "If We Take (the 1970 NYG)" that is not one of the 100 copies called for to be signed. It includes the little man and flask drawing. I am 99.9% convinced of the authenticity of the signature (hopefully you'll agree), but I was wondering when it may have been signed. See attachment for a picture...Thanks. 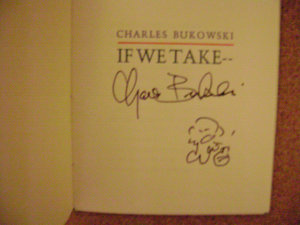 Yes, it is almost certainly legit and certainly signed after 1970. There are probably others that can tell you when, but I'll take a stab at 1987...

Founding member
yeah man, that one is beautiful. i'm sure it's real.

Thanks, man. I have nothing close to countless members here, but I've tried to collect a few nice ones.


bospress.net said:
Yes, it is almost certainly legit and certainly signed after 1970. There are probably others that can tell you when, but I'll take a stab at 1987...
Click to expand...

I had a chance to look more closely at the Manuscript section here, and I guessed 1986. So, perhaps we're honing in on the date here. So, since Buk had stopped doing public readings in 1980, how do you think this could have come to be signed? Certainly somone bringing this over with a six-pack doesn't seem likely, give Buk's writings on this subject???


So, any idea when Buk first used the little man and flask?

Buk did appear at bookstores for readings and etc. Also, I'm sure that there were some people that mailed these things to him. I know that Montfort used to bring bags of books for Buk to sign and it would piss off Red. I'm not sure where I read that story. One of the bios?

Anyway, a reading would be the worst place to get something like this signed. Buk also did booksignings at Abandoned Planet in the late 80's or very early 90's? I know that Scott has written about this.

Not only bookstores but, as we are realising (hopefully) Bukowski was usually a very courteous and generous guy. He 'signed almost whatever was put in front of him' (I'm not sure where I read that either, but I remember that sentiment).
I think he would have signed any of his books if the person approaching him was polite and concise. I.e - ask nicely then get the fuck away.

I'd also say late eighties on that sig and little man. I have probably a dozen just like it... it's legit for sure... it just doesn't coinciding with the books release is all.