Too many things to say and I can't type them up now as Ona is sitting -again!- on my knees.

Just a few things:
-I received an unpublished, hand-written STORY from late 1947 with lotta cool drawings.

-At least 3 "lost" stories are mentioned by title.

-One of the funniest rejection letters ever. Burnett told B. that one of the rejected stories was pretty good, but he couldn't understand why the gorilla talked. Then he said that if B. made the gorilla "deaf and dumb" he might consider publishing the story!

-No pre-1945 material mentioned. Too bad about that.

-I paid $27 for these letters, but they're worth every single dime.

Godammit! cirerita! You ARE a fucking hero!
...and from day to day you become even more of a god.
You enlighten our darkness, baby!

-In April 1947 he was in Philly as well. No address specified, though.

Late last April my belly broke open and I had hemorrhages right, left and upsidedown. They put me in the charity ward of the General Hospital and socked me with seven pints of blood in 24 hours.
Click to expand...

The year seems right because there's a reply from Burnett dated Feb. 17, 1955.

I was there 9 days and they sent me a bill for $14.24 a day. Some charity ward. Wrote a story about it called Beer, Wine, Vodka, Whiskey; Wine, Wine, Wine and sent it to Accent. They sent it back: ... "quite a bloody spate. Perhaps, some day, public taste will catch up with you." My God, I hope not.
Click to expand...

So All the Assholes... was not the first time he told that story in story form.

Founding member
Oh, Burnett tells B. to write a novel several times. B always says that he's not up to it, but by 1947 he already has a title in mind: Blessed Factotum ;)

Founding member
this is great

Another solidly standard Philly neighborhood. The Yuppies buy these things up. Notice that they were doing some construction on that street recently. I would not live there. Just too close to everyone else, but I would not live in a really nice neighborhood in Manhattan, either. Still, if you're gonna live in Philly, this is not bad.

I think that the side of the street that he would have lived is where that large apartment building is. It does not look that old, so the building that Buk was in may have been torn town.

Founding member
ok, forgive me for being ignorant, (to the point of embarassment). but who exactly is Burnett?

I hope this will help you.

Whit Burnett was the editor of 'Story'-magazine in which Bukowskis first story ('Aftermath of a lengthy rejection slip') was published in 1944.

cirerita:
What a find! All those 'well researched' biographies have to be written anew due to YOU!
Man! 1954! We have to compare all other sources of these years new now.

Founding member
ah, yes. thanks guys. I'll dig out "whats his names" book and have a re-read. again. and thanks to cirerita for all the work and information you hand to us freaks.

I just hope that if anyone writes another biography, and they use the wealth of knowledge from this forum (which they would be foolish to not use), that they will credit the appropriate parties (meaning Cirerita). It would be somewhat dishonest to use this forum for info without crediting the hard work of tracking down this important info that keeps surfacing.

Founding member
I doubt it, but you just never know.

In any case, the info available on the forum is just the tip of the iceberg. If you want it all, you gotta pay me a visit ;)

One of those early, lost stories is titled: "A Genius on Skid Row" ;)

Have you seen any of these stories?

Founding member
When I say they're lost, I mean it. They're lost! I know those titles because Bukowski and Burnett mention them in their letters not because I have copies of the stories.

Excuse me (deep breath - then another) but does this mean STORY as in SHORT STORY? Or more accurately PREVIOUSLY LOST BUT NOW REDISCOVERED SHORT STORY?

(pause - another deep breath) Oh, I get it, must be an illustrated story in a letter. Not a SHORT STORY. No, couldn't be that.

I look forward to hearing the story behind this find Cirerita.
27$ be damned!
;)

PS: I expect Howy S. soon will contact you demanding you recant the new info you claim to have discovered... it doesn't seem to fit in with his immaculate bio.
Is the "10-year drunk" starting to expand again after years of shrinking? :rolleyes:

Erik said:
Excuse me (deep breath - then another) but does this mean STORY as in SHORT STORY? Or more accurately PREVIOUSLY LOST BUT NOW REDISCOVERED SHORT STORY?
Click to expand...

You got me there!

Here's the first page from this unpublished story. Don't ask me to scan the full text as it's a 10 page story and I just don't have time for this. I'm a full-time dad and I have other priorities :D 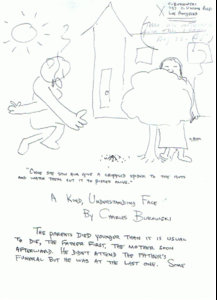 This is the earliest unpublished story available that we know of. I don't think anyone in the Bukowski "circle" has ever seen it. And it's not a bad story. The other drawings are much better than this one.

Let me be the first to say -

Note the signature on the drawing - C. BUK.

Congrats, cirerita! Incredible find! A "new" short story - that's fantastic. And new info about his relations with Burnett and his stay in the Charity Ward. Ãou sure hit the jackpot this time, c...!
Last edited by a moderator: Dec 2, 2013

Founding member
this is great

cirerita said:
Here's the first page from this unpublished story. Don't ask me to scan the full text as it's a 10 page story and I just don't have time for this. I'm a full-time dad and I have other priorities :D
Click to expand...

Thanks for sharing again cirerita. Is that story illustrated throughout?

Founding member
yep, it is.

Cirerita I don't post my thanks often enough. My excuse is that I am also a dad of two plus I spend 4 hours a day commuting and sit at a desk for another 8 hours, so I barely have time to read the new posts as it is, but I just wanted to publicly thank you for all your efforts. They are appreciated more than you know.
W

Founding member
CIRERITA,thanks its allways fun to read things like that ,this site gets better and better

-In April 1947 he was in Philly as well. No address specified, though.
Click to expand...

That may be 2020 Mt Vernon St, Philadelphia which is already in the timeline. But I'll add April.

The year seems right because there's a reply from Burnett dated Feb. 17, 1955.

Now this one raises some questions.

Were there two medical procedures that he rolled into one "charity ward" incident?

Because there is supporting evidence for 1955, including "I almost died last April" and the copy of the bill from the County of Los Angeles dated 1955...

Founding member
I don't think so there were two episodes:

Founding member
Seems odd they would bill him a year later is all. Assuming the (typed) date on the bill is accurate of course. Ha.

But the letter evidence is compelling.

mjp said:
Seems odd they would bill him a year later is all. Assuming the (typed) date on the bill is accurate of course. Ha.

But the letter evidence is compelling.
Click to expand...

And assuming that the date on Buk's letter to Burnett is accurate. It would be strange though if he wrote 1954 instead of 1955 by mistake...
Last edited by a moderator: Dec 2, 2013
This site has been archived and is no longer accepting new posts.
Share:
Facebook Twitter Reddit Pinterest Tumblr WhatsApp Email Share Link
Top