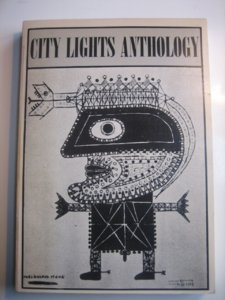 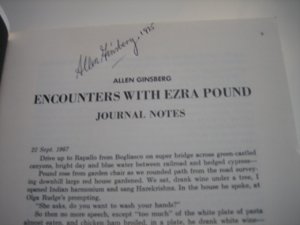 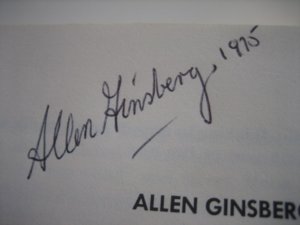 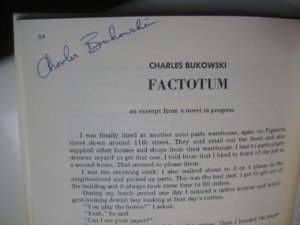 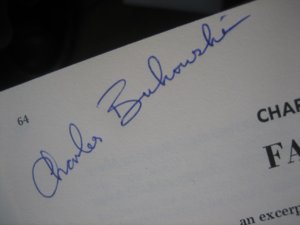 I recently bought this from a Dutch auction site.
Does anyone own or seen a signed copy of this before?
I don't know, there's something odd about Bukowski's signature (last image), it looks legit to me (altough the 'o' is a bit different than other sigs), but it's larger than I have ever seen before.
(should have measured the sig for you, will do later)

Moderator
Founding member
It's very neat, regular and looks to have been written smoothly, by a practised hand. Very possibly a genuine signature although I'll agree it is not exactly like his more common signatures. Perhaps he was taking extra care signing this book for some reason?

That is a tough one. To me, it looks too neat. It would scare me off.

The Ginsberg looks right, but something about the buk seems wrong...

not saying that it is a forgery, but it scares me enough that I would pass on it.

Founding member
Look at some of the manuscript and letter signatures and find one where the "B" in Bukowski is connected to the "u". I can't find one. Look at all the early inscriptions that nymark posts. I don't think I've ever seen a signature with the B and u connected like that. The B is always separate.

That doesn't look genuine to me based on that "B" alone. But maybe someone can find an example of a connected "Bu."

In addition to what's been stated, the connectivity of the "h" and "a" in Charles seems odd. Also, the "e" and "s" are typically connected, the way the "s" looks in this one, but in this case, the "e" is also present.

It does look very carefully done; somewhat like the signatures in the '63 and '65 Loujon editions. By '75 or so, his signature had evolved (or devolved). I can't say it's not genuine, but I would personally be a bit uncertain about it.

mjp said:
Look at some of the manuscript and letter signatures and find one where the "B" in Bukowski is connected to the "u".
Click to expand...

Same with the "Ch" connecting with the "a" in Charles. It's not usual for the letters to connect up like that. Maybe someone handed the book to Bukowski and said "Could you please sign it neatly for a change?"
W

I have a ton of signed Ginsberg items and this one, I'm sorry to say, is a definite forgery. It doesn't even come close. I also agree that Bukowski's signature is far too neat.

Moderator
Founding member
the 'L' in Charles is too high. in most of his sigs, the 'L' looks like an 'E', or it looks like it's not there at all. the "Ch" is the only part that looks right.

mjp said:
That doesn't look genuine to me based on that "B" alone. But maybe someone can find an example of a connected "Bu."
Click to expand...

Hmm... Yes good point. Here's a joined Bu, but notice it's not joined in the same way:

tinux said:
.. there's something odd about Bukowski's signature, it looks legit to me (altough the 'o' is a bit different than other sigs)...
Click to expand...

The 'o' is what jumped out at me as well. I've noticed that the 'o' usually looks almost like an 'a' in his signature, but not on this one.

And the neat way it's written, as if written on a straight line very carefully, is enough to make one suspicious...
Last edited by a moderator: Dec 2, 2013

except, he should've asked before purchasing...;)


and i agree with most everyone else. it looks forged to me too. waay too practiced.

I hope he can still get a refund!

Do auctioneers over there give refunds? Auctions are usually caveat emptor -- unless there is some form of authenticity guarantee in the terms of sale.

any auction house worth anything will grant a refund based on evidence.

A printout of this thread should be enough to get a refund...

Thanks everybody, for the little episode of CSI you performed here...

When I opened the book, there was something odd about it, but cognitive dissonance got a hold of me...;)

Anyway, I'm convinced now by all the wrong connections in Bukowski's signature you pointed out and weary.tune's comment about the Ginsberg one, that I've bought a genuine fake.
But ah well, I paid around (calculated from euro to dollars) 100 USD for it, I guess it was worth the gamble. (Cognitive dissonance again ;) )

I didn't buy it from an auction house online, but on a Dutch site that is very much like eBay. (In fact, eBay bought the site 2,3 years ago.)

I trust the seller whom I bought it from, I bought from him before, and believe him when he wrote in his description that he bought the book in 1975, in Amsterdam. I'm pretty sure he didn't know it was a fake.

So, anyone interested in a reading copy of City Lights Anthology, Very Fine, nicely doodled by an unknown hand? :)

Thanks again for your efforts.

Founding member
my first thought when I saw that sig was FORGERY. I may be wrong but somebody told me to always follow your gut.

Not always a good idea. After all, that's how our former illustrious leader made all of his decisions, and look where that got us.

or worse still he followed the guts of guys like Cheney and Rove.

That was a very enlightening dissection of signatures.
Thanks

My impression is that it may be fake. "Bukowski" is stretched out long, carefully spaced and all the letters neatly formed. I haven't seen another like it. "Charles" looked okay to me, but I'm not an expert in his signature.

HenryChinaski said:
my first thought when I saw that sig was FORGERY. I may be wrong but somebody told me to always follow your gut.
Click to expand...