Crumb is an awesome comic artist.
I've seen the documentary about him more than twice.
Fritz the Cat was fun as a film, but the comic is way better.
It's a pity my pc speakers don't work, I would like to hear the songs.
aah, headphones.

Thank you for posting this.

I am a huge Crumbian. I am awaiting his illustrated Book of Genesis which I believe is in the works...

The thought of that just made me laugh. R Crumb is awesome.

Founding member
yeah, it's really good. npr has alot of great stuff archived that you can check out.

Yes, the interview is very good indeed! I just listened to it. For a Crumb fan it's a real "nugget". Later on I'll see what else they've got in their archives...
Last edited by a moderator: Dec 2, 2013

hopefully he'll swing by his old neighborhood when he tours the US.

Thanks, Erik! - I'm looking forward to reading his take on the Book Of Genesis. It'll be funny to see the reaction from the Christian fundamentalist right-wingers...:D
Last edited by a moderator: Dec 2, 2013

I stumbled upon two small interviews with Crumb.

Cool! Thanks a lot, d gray.

d gray said:
another audio interview - about record collecting and his interest in "old time music"

Didn't he meet Harvey Pekar due to their mutual love of jazz?

Founding member
i think they met when crumb was living in cleveland.

Crumb moved to Cleveland around '62 to hang with his penpal Marty Pahls (who ended up marrying RC's sister). Once there Pahls introduced Crumb to a friend who was friends with Pekar. They were all old 78 collectors (Pekar more into bebop jazz, Crumb more into 20s/30s blues). All lovingly detailed in the early issues of Pekar's American Splendor, so worth checking out.

"You have to go to somewhere like Serbia where the Gypsies are so outcast they still value their music to really find that kind of music making today. To me,” says Crumb, clearing his throat, “the buying and selling of music, what they’ve done to it, is a disaster on the scale of cutting down the rainforest.”
good way to put it!

Black Swan said:
“the buying and selling of music, what they’ve done to it, is a disaster on the scale of cutting down the rainforest.”
Click to expand...

Says the "owner of one of the world’s most comprehensive collections of ethnic music 78s." :rolleyes:

If no one had gone out and recorded regional or indigenous music and then sold it - commercially - no one would have ever heard it. I think his point, that modern, over-commercialization has somehow killed regional music, is incorrect. Radio "killed" regional music a long time ago, but again, without commercial radio, no one would have heard that music anyway, so...you're damned if you do and damned if you don't.

Is he suggesting The Beatles should have stayed in Liverpool, or that Bob Dylan lost all his "authenticity" once he left Hibbing? Woodie Guthrie and New Orleans jazz musicians should have been kept away from recording equipment and trains?

Sounds like in his perfect world hillbillies would remain isolated and ignorant so he could make a trip once or twice a year to stare at them while they play "authentic" music. No wonder he moved to Europe, he's a colonialist at heart.

the naming of Crumb reminds me:

At one of our symposiums 2 years ago, a guy held an address about Bukowski-Illustrations by Crumb.

He did pretty good, but unfortunately in German. Anyway, if you're capable of the language, it'll be a wonderful read in the upcoming yearbook of the Charles-Bukowski-Society.

(this btw. will be the first time, the yearbook's published by MARO! - for Beginners: Maro has been the publisher who First dared to bring out a poetry-book by Bukowski in Germany in the 70s, when all the big publishers declined!)
Last edited: Sep 11, 2013

Black Swan said:
"You have to go to somewhere like Serbia where the Gypsies are so outcast they still value their music to really find that kind of music making today. To me,” says Crumb, clearing his throat, “the buying and selling of music, what they’ve done to it, is a disaster on the scale of cutting down the rainforest.”
Click to expand...

good quote for sure. greedy homogenization is saddening, whether its real estate development or cultural development.

Founding member
"crumb on others" is a great section of the official website. 8 parts so far...

"One of his lame-ass silk screen prints goes for more money than some original renaissance art."

yeah, that did make me laugh.

off topic, but skiroomalum, you look exactly like I thought you would.

I always want to call him Kim Wrong-Un. The leader of North Korea, not you skiroomalum.

The Crumb-freaks here may know it already, but I'll tell you anyway:
Vol 1-6 of Crumb's notebooks have just been published by Taschen-Verlag.

btw, HERE's Vol7-12, which had been published already.

Thanks, Roni! Crumb's sketchbooks have in out for years, but it's the first time I´ve seen them as hard cover boxed sets. Too bad, they're so expensive - 6000 DKK per box, that's over $1100, and we're talking two box sets. Still, they look beautiful and they're limited editions of 1000 copies. I just wish I could afford to spend $2200.

Speaking of the Crumb sketchbooks box sets from Taschen, I just stumbled over a new issue of the Taschen Magazine in which they mention the box sets, but also shows a couple of rare photos of Crumb shot by a guy named Harry Benson for Life Magazine for an article on Crumb. However, Life Magazine changed their mind after having seen some of Crumb's art involving naked people. Here's the Taschen Magazine article with the rare Crumb photos: 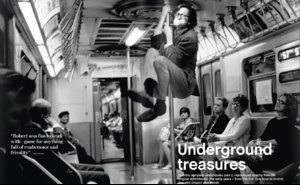 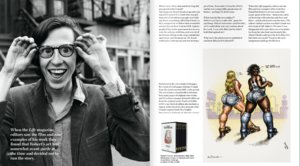 Great stuff! I did´nt know Crumb played some of his old records on radio. Thanks...

Founding member
i know, it's great. and his background info about the music is really interesting.

and who knew the history of shellac could be so compelling... in Germany they recently published the two Buk-Crumb-colaborations 'There's No Business' and 'Bring me Your Love' in one slim volume with all the illustrations and bilingual. That's nice.

But they made a major editor's-mistake:
the original English text and the German translation aren't printed on facing pages side-by-side. They follow each another. How stupid!