i can't recommend the newspaper version highly enough. it's only $8 from copacetic comics, and it really is a masterpiece. in contrast, our deluxe edition will be around $300 and will require an enormous amount of work. I may pitch a "nice" edition (better than newsprint but not as nice as the deluxe) as well, but i don't know if there's really a need for it, since the newspaper version does what it needs to do.

Why not include a newspaper version with your $300 edition? Can you get him to sign that copy too and include it? Not sure if it is a good idea, but I'm throwing it out there...

If there is space for it and you want me to print a bookplate for him to sign, just design it in one color and have a plate made and I'll print 'em...

I was thinking of including the newsprint edition in a sleeve or something, but the more I thought about it, I decided that I wanted the two editions to be totally separate. As in, I don't want mine to be the 'definitive' edition of the book or anything, one because I didn't publish the original version, and two because the newsprint edition was designed and printed that way on purpose. Part of the challenge so far has been to mimic the newsprint effect in the deluxe version, so I have to be careful not to print the colors too bright.

It's an interesting project, because Santoro never intended for something like this to be done - in his mind, the newspaper accomplishes exactly what he was trying to achieve. That said, he is on board with the idea of doing a fancy presentation of it for collectors, which I appreciate, since I can't stand the way newsprint comics fall apart so quickly. The other option would be for collector types who can't afford a $300 book but still want a presentation that is sturdier than the original newspaper.

Also, thanks for the signed plate offer - for this one, I'm going to have him sign directly on the back cover, hopefully with a little drawing.

jordan said:
i can't recommend the newspaper version highly enough. it's only $8 from copacetic comics, and it really is a masterpiece.
Click to expand...

okay, since i dumbly combined two major projects under one thread, i thought i would post some photos of the santoro book, which is going to be available very, very soon.

the trade edition (9" x 13" softcover) is $45, and the deluxe (15" x 20" hardcover) is $400. both editions are signed, and the deluxe includes a sketch. this is a very significant book for chance press. it's the first one published since we made the decision to cut down on the number of projects and focus instead on large-format graphic art books. (i'm about to post info on our next book, coming this fall.) i haven't opened up ordering for the santoro book yet, but copies will ship in a month or so (i'm waiting on the sketches currently), so PLEASE send an email or respond here if you want a copy. there are only five deluxes to go around. jordan said:
i combined two major projects under one thread...
Click to expand...

Okay, here are some fancypants photos of the deluxe. Still waiting on the signed plates (which should arrive Monday), and these will be ready to ship! 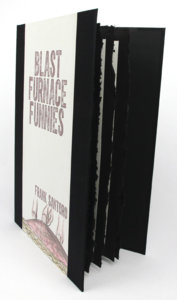 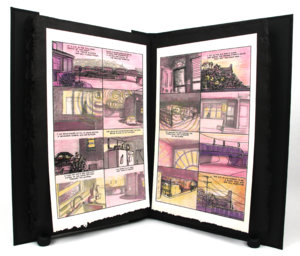 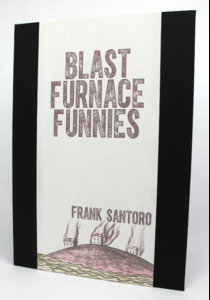 ok, it's live on our store! buy away.

this may have been a mistake...

i'm just getting worried that the deluxe edition won't sell. i don't want to sound desperate, since that's never a good look... but i may have been overly optimistic about the saleability of a $400 book, especially considering the amount i had to put in to make it happen. the trade edition should do fine, but even if we sell out of the trade, it won't cover the costs of the deluxe.

I wish I could go for the deluxe, I think it's amazing work, like everything else Chance does. Really looking forward to my
trade copy, though, and hope you sell out of both editions. My youngest daughter loves furlqump, by the way.
You guys rock!

Founding member
You might not sell the deluxe quickly, but you will sell them. You just have to be a little more patient with those in that upper price range. Sometimes you have to sit on them for a while. you have to look at it differently I guess - that you will make your money, just not exactly when you are expecting it always. But you will make it. You have to see that as not making any difference: now or later. I know it's hard to not get discouraged, but try not to be. Those, especially, are going to sell. It's just a matter of putting them in front of the right eyes.

By the way, the books look AMAZING!!! cool! glad it got there in one piece... and you can thank bill for printing that fancy thank you card. that's version 2 (version one is just about gone, and the remaining onces will go in the inevitable chance press ephemera books when we get around to assembling them).

"furlqump" by brett harder - coming this fall from chance press