Back in late December, I started a thread that chronicled the accusations, recriminations and possible legal action that occurred because of Bukowski's rejection of poet Leslie Hedley's submissions when he was wearing his editor's hat at HARLEQUIN.

In a subsequent issue of HARLEQUIN, after Bukowski's departure, Fry went on to apologize to Hedley and print his poems in full.

In TRACE 33 (Aug-Sep 1959) in an editor's soapbox section, Bukowski tells his side of the story.

I was looking through some issues of TRACE and it seems that Fry caught wind of Bukowski's rebuttal and wrote her OWN rebuttal that was printed in TRACE 39 (Sept-Oct 1960). This was, presumably, the last word in this ugly battle of egos but who the hell knows. 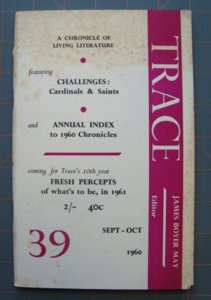 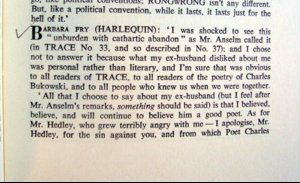 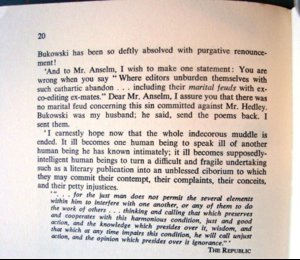 It seems like Barbara Fry got the last word in this matter. - "Indecorous muddle" ..."Unblessed ciborium" - She sure has a way with words. :)
Thanks a lot, Nymark...

Thanks for the link, I was too lazy to look it up so I improvised/ignored my own ignorance. It's a cool word. :) I'm glad I now know it.:)

nymark - thanks for the Trace scans. Good stuff for us Bukowski fanatics. Now I'll need to go back and read the earlier thread, which I must have missed (at least I don't remember it...)

Founding member
I guess Trace was a kind of slow motion forum in those days. Like if your responses here took a few months to show up. ;)

The way she writes I imagine her speaking with one of those weird, phony British accents that so many "cultured" Americans adopted in the first half of the twentieth century. She must have been a real pain in the ass. The two of them together would have been something to witness, man.

Founding member
Trace was a milestone magazine in Bukowski's career for several reasons. There ain't much info on Trace and B. but I'm doing my best to put it all together. A short preview of sorts (B to May in late 1959):

Trace has long impressed me as the only gathering ground for those of us camping outside the oligarchy of university wall.
Click to expand...

Re. Barbara's accent, that reminds of a Mexican girl I met somewhere in Southern California who kept talking to me in standard Spanish -instead of good ol' plain Mexican Spanish. I told her, "what's wrong with you? Why don't you just talk normally?", and she said that using standard Spanish was taken as a sign of culture, nobility or somesuch. What a jerk, man. I bet Fry was in the same league.

Would this place then be a cyberium??

In Quebec, if you want to swear, just say the word for ciborium (ciboire) in a loud voice. Same with host (ostie), chalice (callisse), and tabernacle (tabarnak). will show you how it's done.

Cool cat! Unfortunately, I did'nt understand a word of it.
Speaking of Quebec:

Shit, I remember when Uncle Vince used to do the traffic reports for CFNY, I mean, 102.1.

Any other Toronto Bukowski freakazoids remember him talking about congestion on the "Humber hump", followed by the trademark "ta ta ta tah"... mmm.... probably not.

W
My Friend the Gambler