Please forgive me if all this has been discussed before.

Back when Bukowski was an editor at Harlequin, he had, according to Fry, an unpleasant exchange with poet Leslie Hedley regarding his submissions. Fry claims that insults flew, feelings were hurt and lawsuits were threatened. In Volume 3, No. 1 of Harlequin, published after Bukowski's departure, Fry issues an apology to Hedley and reprints his poems in total - with the hopes of avoiding a lawsuit.

In the summer 1959 issue of Trace in the "Editors Write" section (which appears to be a place to vent), Bukowski responds to Fry's accusations and comments on her apology. This is a lot of melodrama for a bunch of unknown poets and editors, don't you think?

The first pic is the table of contents from Harlequin Vol. 3 No. 1 that includes Fry's signature and Wheeler, TX address. 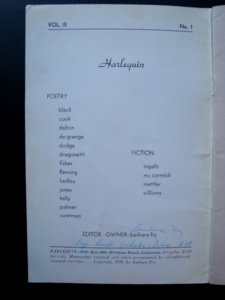 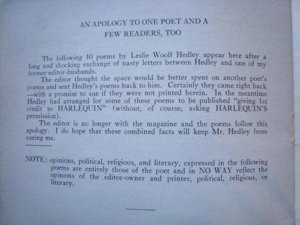 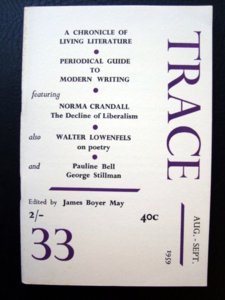 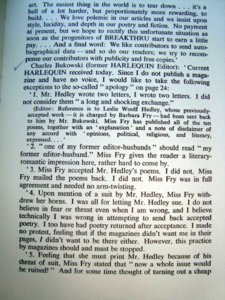 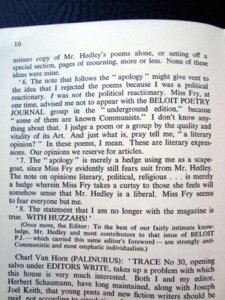 Founding member
Wow. How did you manage to get that?

This, like some other Harlequin related letters, seems a lot of melodrama/bitching/vanity/whatever for sure.

Note that Barbara Fry(e) seems to be spelled FRY by, errrm, everybody, including herself(???) ... Now where the hell did the "Frye" ever come from?

Founding member
HUZZAH! That is indeed full of sound and fury, signifying nothing. I guess the threat of a lawsuit was more frightening in 1959 than it is now. I am still waiting to be sued after 50 or 60 threats in the past 15 years.

It reminds me of a couple of poems I had published a long time ago, my first published poems, in fact. The magazine fucked the things up grandly, dropping words, lines, changing the format, and I sent them a real pisser of a letter. They reprinted the poems in the next issue, but they printed my bitchy letter too, which, by that time, seemed really petty and ridiculous. That very effectively taught me to shut the hell up about some things.

Maybe this Hedley (who?) learned the same lesson after having his poems appear under an intro like that. Ha.

That makes it pretty clear Miss fry was a weasel. Like Bukowski has said before how he is a nice guy and people shit on him and walk all over him. In this case they blame everything on him. Thanks nymark.

Johannes said:
Note that Barbara Fry(e) seems to be spelled FRY by, errrm, everybody, including herself(???) ... Now where the hell did the "Frye" ever come from?
Click to expand...

I note that the corrected address looks like it reads Frye Ranch though. I wonder if the addition of the 'e' was to affect some kind of upward mobility at some time or other? Well its one theory.

And the line 'I do hope that these combined facts will keep Mr. Hedley from sueing (sic) me' sounds a touch sarcastic to me.

I love the idea that a poet would have standing to sue for not printing poems, accpeted at forst or not). To have a contract, both sides have to give something. If Fry(e) was not paying for the poems, then it was impossible to sue as there never was a contract. That is why people sell land for $1 instead of nothing. There has to be some financial consideration. If Fry(e) paid for them, then I'm not sure that she would be required to print them, just to pay for the rights to print them. That assumes that she had a written contract. Also, why would Hedley want to be in a magazine that did not want his work? Sounds sad and desperate to want your poems published that badly.

It is all very funny.

hank solo said:
I note that the corrected address looks like it reads Frye Ranch though. I wonder if the addition of the 'e' was to affect some kind of upward mobility at some time or other? Well its one theory.
Click to expand...

Yeah, I noticed that "Frye Ranch" too. She dropped the 'e' at some point for her own grand and mysterious purposes. Since she said "Fry," that's how I refer to her in the timeline, etc.

Founding member
Seems so, yes. And B. took that over. For whatever reason. Well. There are bigger mysteries in the B.-Fry(e) context. For some reason the whole episode has always seemed truly bizarre to me.

Either the truth is very far from the promised-marriage-unseen-through-letters-to-millionairess picture or something else. It's too bad the correspondence is lost. Thinking of it, at one point or other there might have been letters to or from Jane Cooney Baker too. All fled, all gone. Too bad.

Poor Fry(e). She seems to have been scared shitless by that Hedley guy's threat of a lawsuit. :D

Founding member
I think to recall that Leslie Woolf Hedley rejected Bukowski when editing Inferno. That might explain (a few) things.

Founding member
And I believe that Leslie Woolf Hedley was mentioned several times in Beerspit Night and Cursing (?) , but don't have the book now. I'll look it up as soon as possible.

Haven't we discussed that name thing before (Fry/e)?

roni said:
Haven't we discussed that name thing before (Fry/e)?
Click to expand...

Yes, we have. I'm not sure that there is a ruling, as different people in her family seem to spell it differently.

W
My Friend the Gambler