Reaper Crew
Moderator
Founding member
well, this would convince me to get more than one haircut a year.

Founding member
I thought you cut your own hair? I was under the impression all of the moderators and admin types did it. That's what you guys told me.

Reaper Crew
Moderator
Founding member
no, we cut each others hair!

fuck, man! did that week at The Jersey School of Man-Beauty mean nothing to you?
S

I was going to comment on cocktail coiffures and martini mullets but you two seem to be sharing a moment. I'll leave.

Ha, that's cool. I always thought a salon, or barber shop where women were topless as they cut your hair would make some money. I only thought that, after once getting a haircut at a fantastic sams or something similar, where the girl cutting my hair said she was thinking of opening a business under that premise! As she cut my hair and told me of all her grand ideas, I thought, hmmmm, that may actually make money.

I cut my own hair. And still look fucking fabulous. But have no interest in listening to people grippe all day about their bullshit. Being a hairdresser is very similar to being a shrink. Without all the legal drugs and sex.

Hmmm, I have sat in barber shop chairs and salon chairs many a times, and have only ever listened to the actual person cutting my hair go and on, usually with the other hair stylists next to them. I've never really said more than a "sure" or a "yes, yes." My uncle has owned a salon at the intersection of Venice blvd/Inglewood blvd in Los Angeles(they actually filmed barber shop 2 in the salon) since the early 80's and I've never heard him mention that sort of thing, amongst his ramblings and stories. I'm going to have to ask him if he feels like a shrink.

My feeling is that a woman's salon is probably more like what I described than a man's barber shop is. Though, I could be wrong. I'm curious to hear what your uncle has to say on the matter.

Well my gay uncles salon is most certainly a woman's salon, though he does have many male clients. And according to a text I received today from my mama, he's cutting my hair this Sunday afternoon, so I'll definately get his take on the matter.

Venice and Inglewood? That's my neck of the woods, man. My mom worked at the library on that corner for around 25 years.

Did your uncle take over the salon from a creepy guy named Peter?

Ha, ha, chronic you hit the nail on the head. My uncles name is not Peter, but to tell you the truth I'm not sure there ever was a real Peter. Man, that sounds funny. That was a fictional name made up by original owner who called himself Peter back in the 70's, well that's the story I'm told and yes, it certainly is my uncle who took it over from the "creepy Peter" at some point in the early 80's or late 70's. My uncle always said the name was already popular, established, etc, so he kept it for the salon. But now I'm wondering if most would consider my uncle the new creepy dude? Ha, ha, anyway my uncle still owns it and is not creepy to me, well maybe kind of.

His name wasn't really Peter? News to me. I remember him as an unpleasant guy who, judging from the looks he would give us, really disliked kids. I think he actually started that business in the '60s since I remember him being around when I was 10 or so. I lived a few blocks west, and since my mom worked at the library, I would see him on a regular basis. He always creeped me out... him and the old lady who was always around the area with about 10 pounds of make-up on her face.

His name certainly could have been Peter. The stories I was always told, by family was that they really tried to persuade my uncle to change the name of the salon. His argument always stayed the same, which was, the name was known and it was not the owner Peter's real name anyway. But honestly most of these arguments, memories are from when I was around 9-10 years old in the mid 80's. Now I can't wait for Sunday, Ima have to grill my uncle with some questions! In any event, I guess my uncle knew better than family, because the name remained successful and I think he'll run that thing until he dies, and I think my uncle must be 60 by now.

hoochmonkey9 said:
no, we cut each others hair!

fuck, man! did that week at The Jersey School of Man-Beauty mean nothing to you?
Click to expand... 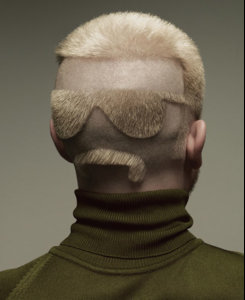 You guys sure did a good job with one another.

I went to a hair salon in the 70s that served drinks. Actually I had to serve myself and they had no mixers or ice so I had a 6 oz serving of tequila. Nice hair cut.

Now I go to a barber shop where the only lady barber gets excited about how soft my hair is. I always go to her but I have to ask her to stop rubbing my head.

Jesus Christ - how did you find your stomach afterwords? It hadn't moved out and gotten a job or whatnot?

Nervas - Please do tell when you hear.

Hahahahahahaha! Where did you get that idea? That's the best laugh I've had in a month. Thanks I needed that, Aunt Lolita.

Younger than 40 but maybe younger in your head.

That's always depressing. I think. Unless by that you mean I'm charmingly youthful.

Lolita Twist said:
But have no interest in listening to people grippe all day about their bullshit. Being a hairdresser is very similar to being a shrink. Without all the legal drugs and sex.
Click to expand...

So I got my haircut today. My uncle was not in the most talkative mood, as his regulars filled up nearly every minute of his Sunday. But anyway, he said the only time he has ever felt like a shrink is with wannabe/semi famous actors/musicians. But I think that has more to do with his location than profession. He said, ah, I'll put it this way, "someone from the band buckcherry was in getting his hair did the other day," and he had to listen to him go on and on for an hour about how his band should be as big as Motley Crue by now. He said, as he listens to things like that, it's the only time he feels like a shrink! Ha, good story, if anything else. 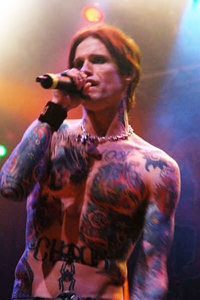 That's fantastic. If he wrote a memoir, I would buy it.

Last week, I was able to see my hair for what it is. Thinning, grayish and limp. But let's not talk about my penis right now for Chrissakes.

So I don't mind admitting that I now highlight my hair with some medium brown color in order to avoid
looking like I've been kidnapped by timberwolves to breed future pups...

No6, your next step will be to shave it all off. Save your money.

I shaved my head for quite some years, then I had a mohawk, cut it off and now my hair's a messy plant. I just don't care anymore; gonna get myself 2 baseballcaps, ha.

At 37 years of age, I have some grey hair, but I stopped using the gay black hair dye.

Maybe I'll go bald again, it's a fresh feeling and uncomplicated in the morning. Where are my curlers?

Or a pomo haircut.

you can always shave off your head, and sew a layer of hair unto your baseball caps, different styles and colors. :)

My friend George is in his last stages of cancer, he wanted me to shave my head with him. I pondered it seriously for a few days and decided against it. I'm still crying over it - I know no one in their right mind will do that with him. I was seriously thinking about it too, but I guess I'm too vain.

Sorry to hear about your good friend, Lolita. I don't think that I could have cut my hair, either.

Mark73, Andre Agassy did it before.
But seriously, it is a tough call when your youthful looks leave you, when you are not watching.
Of course, it is not what counts, but still... You start pulling at your eyes, the corner of your mouth, you check your teeth, you tighten your abdominals, next thing you know, all goes south. No return... 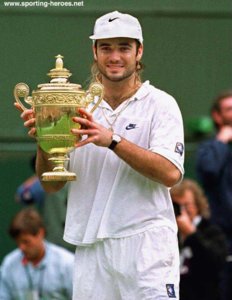 He should have merchandised it. Pah, now we'll grow rich and fat with that idea. 50/50 ok?

Mark73 said:
I shaved my head for quite some years, then I had a mohawk,
Click to expand...

Oh! Want a picture, Bruder! Had I lived during the punk era, I would have been strongly tempted by a mohawk. Last year, while I was doing an awful internship, there was a guy who took the same subway as me at the same time and he had a somptuous mohawk, with the complete punk outfit. He illuminated all my mornings.

Wait some years and it will be done naturally.
:p
Last edited by a moderator: Dec 2, 2013

Sorry, Schwester, my vanity forbids showing off this punk cliche. When I discovered hardcorepunk the era was already over, at least most of the great bands had broken up or changed their sound drastically. I was a typical mid-late 80's hybrid kid and yeah! I had long hair too, but all my teenage photos got lost along the way... moving... losing my property... the moh didn't feel natural.

I always need long hair to hide my jug ears.