I surfed upon this today and it had me wondering if it was real. Do you think its really from Bukowski's first reading and if so, do you think it is really worth that price? I'd have no intention of buying it either way.

it's an interesting artifact if it's true (the provenance is kind of confusing - supposedly dorbin got this from bukowski, but neeli is in there too for some reason), but definitely not worth that much. keep in mind that an original copy of post office with a painting recently sold at auction for $6600, and the highest that a bukowski original painting has reached in recent years is $10,000. 6K for a poster written by someone else to advertise one of his readings is outrageous.

Founding member
I want some of those markers that have ink that is still as clear and vivid as the day you wrote with them even after 44 years. Those are special. Magical maybe.

The image of that "poster" doesn't set off anyone else's bullshit detector? I've been wrong more than once, but I wouldn't pay $5 for that. Even if it was proven to be "authentic" (which is impossible).

It's from Jamie Boran's collection. FYI.

I'm wondering why, in the description of how this was obtained, Buk referred to Sandy Dorbin as "Neeli."

So, Jamie Boran knows his stuff and I'm sure if it was from his collection, he believed it to be authontic. That does not mean that he was not tricked. MJP nailed it. I really have issue too with the markers looking so perfect after all these years. Also, the paper looks to be some kind of posterboard, which would most likely have had a high acid content, yet it seems to be bright white. Even if is was kept in a dry and dark place it seems that it would have aged more. My guess is that this is not nearly as old as it is advertised. I would be surprised if it is even as old as 1995. Also, as Jordan pointed out, the provenance does not make any sense. Why did Buk call Sandy "Neeli"? He would certainly have known them both very well in 1969. Also, I can't tell who they are saying tore the poster down. Finally, the poster looks more like an art project than a poster announcing a reading.

Avgent is a reputable seller, but the Provenance is lame at best. Maybe Neeli can shed some light on it although I can not imagine that he would remember a poster from 45 years ago.

Even if it was 100% real, it would not be worth anywhere near the asking price. As there are so many questions, I cannot imagine that anyone but someone with too much money and too little brains would pay the price... I just don't believe this one: 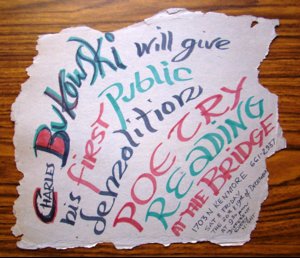 And again, even if we saw a picture of Bukowski standing in front of it on the street, I don't see a tremendous value in it. Now if Bukowski had drawn it...

It looks fake to me. The "torn" edges look like they were done deliberately, a chip at a time. The paper is too clean, too white for something removed from a phone pole decades ago. And the colors are too bright. And was that really his first public reading? I remember hearing about a reading at a bookstore in the 1950s.

Rekrab said:
I remember hearing about a reading at a bookstore in the 1950s.
Click to expand...

I heard about that too -- from you! ;) But as I recall you couldn't find any corroborating evidence of it.

A 50s reading seems very unlikely, but anything is possible. He could have been encouraged to read in public by Barbara Fry, but I can't imagine it being something he would have gone and done on his own. Not in those days.

mjp said:
I just don't believe this one:

Bukowski once painted one of his poems on a plywood board. I'd consider to pay a few bucks for it...

There may be evidence for the 1950s reading. Where I heard about it was in a letter I got in the 80s (?) from a guy who had been a long time Bukowski collector and was older -- in his 60s at that time. He told me he had attended a Buk reading at a bookstore in the L.A. area. I forget the details, but it may have been a group event set up by Barbara Fry or Francis Smith. I didn't throw the letter out, so it's here somewhere in my house, but that's like saying it's somewhere in Carlsbad Caverns. I've looked -- not very hard -- and didn't find it. It will probably turn up when I least expect it. I think he mentioned the name of the bookstore and gave a year. Definitely in the 1950s. Wish I could remember more, or where I stashed it. His name was Sam [Something]. Haven't heard from him in many years, and I don't know if he's still alive. If I do find it, I'll post the letter.

David,
You are not confusing this guy with Sam Smith are you?
Bill

Founding member
If you ever find the letter that you may or may not have, and Sam Something mentions the name of the venue, then we'd have something to go on. But on its own, Sam Something's letter wouldn't be any more verification than the fanciful, disconnected yarn that constitutes the "provenance" of this poster. For me, anyway.

bospress.net said:
You are not confusing this guy with Sam Smith are you?
Click to expand...

Possibly. I thought of him but wasn't sure enough to mention his name. I was in contact with two Sams in those days and Sam Smith was one of them. The letter was from one of these two guys, damned if I remember which one.

I'm pretty sure he gives the name of the bookstore and a year. If not, I agree with you, mjp, it's nothing more than hearsay. Kind of like in the description of the 1969 poster where he says "Maybe the sign was in front, maybe I saw it walking from the Bridge back to his place." Maybe he doesn't remember where he got it.