Was poking on eBay and saw this pop up as a new listing : 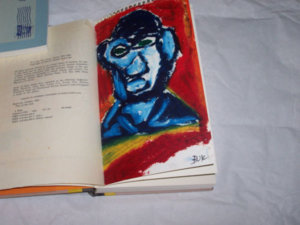 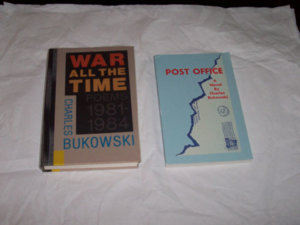 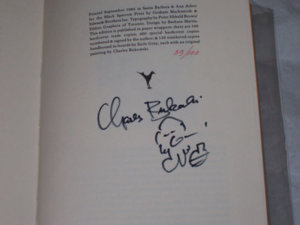 So I picked it up. It seems like the real deal, and at $400 is a steal. If so, I may be re-selling that signed War All the Time I picked up from Bill last year ;)

Anyone know this seller? Know of anyone suddenly missing their copy of this? I'm pretty excited, but also feeling pretty antsy.

seems you got quite a deal...congrats!!!

I'm inclined to agree with Hank Solo.... fuuuuuuuuuccccccckkkkkkk. Congrats on the amazing deal.

Thanks -- I debated posting it on here as I don't want to look like a braggart, but holy fuck I'm confused/ecstatic/anxious about getting such a deal. We'll see.....

Congrats on a great deal.

Founding member
Brag, baby. If you can't brag about this, nothing is braggable.

Yeah, I'm definitely going to brag....ONCE IT'S IN MY HANDS....til then I'm assuming it's an expensive figment of my imagination. Got a tracking number from the seller already, so that's a good sign :)

Seriously: I'm afraid to tell you that this book is a total fraud from cover to cover. It isn't worth more than, say, 10 bucks. But since I am a saint and only want your best, I'd be willing to take it for you at this astronomical price of 400.- just to do a good deed. I'd even pay for the shipping and add another 10.- for the inconvenience you've had.

Roni, how can I resist! Your offer seems MORE than fair!

Founding member
I wonder how long that listing was up before Dan snatched it up? Couldn't have been long...

I might have to start looking at eBay again. You know, for 10 years or so. Until something like this pops up again.

I think I might know how this happened. Dan, correct me if I'm wrong. The thumbnail photo in the auction listing was of the crappy copy of Post Office. Naturally, nobody bothered to click on the auction link, except for our brilliant friend here. Had he used the painting for his thumbnail, the auction would have realized 3x as much. Is that correct?

So yeah, I think it was up up <1 hour, which is why I was able to snake it. The biggest thing that helped was the buy it now. And NYMARK, if I remember, it was just listed as 'signed'. So anyone looking briefly would have though, '200 starting bid for a signed War all the time with a 400 buy it now' isn't a deal. You did have to look at the other pictures and the description to confirm it had a painting.

We'll see how it ends up once it's in my grubby paws. It arrives tomorrow, but I'm going out of town til Friday, so the next fews days will be stressful. I've also been chatting with the seller a bit to find out how they got it/why they got rid of it so cheap. My hunch is, they lucked into it, didn't know what they had, and are psyched to have made some money off it.

Founding member
You could tell from the default image in the listing that it was a hardcover, and it does say "signed w/self-portrait," but with the $400 price a lot of people might not have clicked on it assuming it was just a signed copy.

That spine cloth gives it away though.

I think it was just good timing. First to see, first to steal. And at about 25% of its real-world value, I think it's safe to classify the price as a steal.

That's a pretty damn good painting, too. Glad you got it instead of a book dealer. You aren't a book dealer, are you?

Yah, I think the "self portrait" could have been interpreted as "man with bottle" doodle as well.

Free shipping is a plus, and for a SPLIT second I thought the Post Office might have been a first PB, but that would have been way too much good fortune for one guy.

NYMARK: I'm not sure if you'd consider me a "book dealer" - I co own a small used book, indie comic, zine shop in Denver, but this is definitely for the personal collection. We don't do too much high end stuff or go to shows. We mostly do small press and used paperbacks and such. Either way, assuming this is the real deal, it's going up on my shelf with the rest of my Buk collection.

kilgore said:
I've also been chatting with the seller a bit to find out how they got it/why they got rid of it so cheap. My hunch is, they lucked into it, didn't know what they had, and are psyched to have made some money off it.
Click to expand...


While the answers to this sort of question may be of interest, it's probably best for yourself and most everyone else to let things rest as they lie.

I tend to agree with you, but it was such a bizarrely good deal, my curiosity was piqued. The seller told me they were a art/book collector getting rid of a few things, so I'm content with my score. On that note, I got it in the mail yesterday and holy crap am I pleased. It's exactly what I hoped and the painting itself is super bright and vibrant.

Here's a shot of the painting I took -- I can put up a few more tomorrow. Vibrant colors! Very nice! What medium is it? I can see that he had the side taped down to a board or the table before he started painting.

Pretty sure it's pastels - I picked it up at the post office, then had to rush out of town, so I've had far less time to check it out than I'd like. There are some bleed throughs onto the next page, which I hadn't expected. And yeah, it's super bright.

Reaper Crew
Moderator
Founding member
I thought acrylics too. He'd paint straight from the tube wouldn't he? Fast and loose. Must have been amusing to him how much these painting increased the value of his books, considering how he must have knocked them out fairly quickly.

I know - I was pretty surprised. I've worked with oil, watercolor, acrylic, and pastels, and it really seemed like pastels to me. It seemed pretty chalky like pastels are. There's a tissue page between the copywrite page and the painting to protect both, I presume.

That being said, I really just looked at it quickly, snapped a picture, and had to hit the road. When I get home tomorrow, I'll take a better look, and some better pics.

Just as I posted, Hank Solo's came in - it could well be acrylic, I suppose. We'll see tomorrow! I've wondered too about the cost. Awhile back I made a shockingly nerdy spreadsheet that has all the cover prices for the various editions. Of the ones with paintings, Days, Mockingbird, South of No North, Burning in Water, and Factotum were all $30 originally. Post office was $25. Love is a Dog from Hell, Play the Piano Drunk were $40, Women, Dangling in the Tournefortia, Ham on Rye, Hot Water Music were $50, and War all the Time (I believe the last with original artwork) was $75.

All that being said, I'm curious what the values were 20 years ago when Buk was still alive. Where the costs crazily through the roof? Would he have been scratching his head/laughing, etc? Or was it more like a book that sold for $40 in 1974 was (in 92) worth $200, a 5 fold increase in two decades (pretty reasonable)?

I've only been collecting for about 8-10 years, so don't have the info on that, but I'm certainly curious.

Reaper Crew
Moderator
Founding member
Fogel (1999) lists 'War All The Time' with painting at $1250. I don't know but those editions must have been selling for a much higher price than $75 even before Bukowski died.


And I wonder how many of them stayed with Martin for a while after publication... :aerb:

"And I wonder how many of them stayed with Martin for a while after publication... :aerb:"

I've wondered about that as well. Obviously, we'll never know. One question - I was going through some old PBA sales, and saw that for 'War All the Time' they've sold 'K' which had an oil painting, #40 which had an oil painting, and most recently, #32 which they say comes "With an original oil pastel painting by Charles Bukowski of a face, signed "Buk" (in black) tipped-in following title, with wax-paper guard" which seems to be exactly what I have. But, Hank Solo, you seem pretty confident it couldn't be pastels. I'm guessing either a) when I meant oil pastel, you thought I meant not oil pastels or b) PBA is incorrect. I defer to your wisdom, but any thoughts are obviously appreciated!
Last edited by a moderator: Dec 2, 2013

Oil pastels would be more stable, not so dusty.
Don't tell me now that JM edited his artwork. :D

hank solo said:
those editions must have been selling for a much higher price than $75 even before Bukowski died.
Click to expand...

I think the prices started to rise in 1986 when You Get So Alone was published and people (and dealers) realized there wouldn't be any more books with paintings.

That's a general price for a general book with a painting. Early "deluxe" editions of Days Run Away, Terror Street and Post Office and almost always sell for a premium above that. You see illustrated versions of those titles much less frequently than the later books.

For what it's worth, that looks like oil pastels to me. Look at the edges of the lines. They are too rough to be brushed paint.

Looks like acrylic or oil pastel - but oil pastel tends to leave rub on the facing page. It never really "dries". Your facing page (from what I can see) looks clean so my thought is acrylic, which is permanent, dry and stable.
Oh, and you're one lucky ****. Congratulations.

Sweet Jesus you are a lucky fuck! Just when I thought that steals were no longer possible on Ebay, this happens! And the ironic thing is that the last time I was in your shop in Denver this was one of our topics of discussions: how risky is it to pull the trigger on an Ebay item that seems to good to be true? Good times.

On second look I think it could well be acrylic. And Dirty Jersey, nice to see you again! I thought of that conversation before I bought, actually. Glad I did it -- hope you're well man, and enjoying the snow up there.

War All The Time

War All the Time s/n