Hey folks, did Bukowski ever visit Ireland? Or have any other Irish connections? Thanks.

Reaper Crew
Moderator
Bukowski had never visited Ireland, but there's an Irish connection of a kind: Sean Penn was his long-time friend and admirer.

Of course, there's also Bono*, who worshipped Bukowski and collected his stuff.
Sean Penn was once with Bono in his house in Ireland and Bono was delighted that Penn turned out to be Buk's buddy. Sean Penn then made a phone call in order to introduce Bono; Linda Lee (who was a huge fan of U2) answered it and told Buk it was Bono.
"Who's Bono?" - quipped Bukowski.

Thanks Zobraks! I've just picked up a Bukowski bio by Aubrey Malone, an Irishman - will let you know if I find any additional gems in there.

Jane Cooney sounds like an Irish name. Alka-Seltzer mass is a fairly Irish institution as well. Now if only Buk had knocked her up he'd have a half-kraut/half-mick baby walking the earth to this day.

My scanner is on the Fritz, but I have a beat-up copy of "Penguin Modern Poets 13" that is inscribed on 5-6-69 to James Liddy, who some refer to as Ireland's Charles Bukowski (I've not read his works). I've seen some other early Bukowski books inscribed to him as well.

Also, the Forum's own legendary Bill Roberts named his press (Bottle of Smoke) after a Shane MacGowan/Pogues song.

Bill has published many Bukowski broadsides, including my favorite: "I saw a tramp last night". 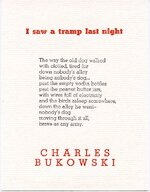 M
Any connections between Bukowski and Bob Dylan?