Hi,
I received my copy of "It Catches" today. This is the one that I won on the PBA auction for $250. It was listed as having the signature page removed.

I have looked and cannot, for the life of me, find the proposed location of the signature page. Also, I cannot see anywhere at the beginning or end where any pages were removed. Still, there is no signature present.

I know that there were supposed to be unsigned and signed editions, but that all 777 were reported to be signed.

the book is signed on the bright yellow title page by Lou Webb as follows:

To Mike
a friend before
and a friend
after ----- in
writing, deeds; and loyalty
Our love -
Jon & Lou
Webb


This is strange for a couple reasons. 1) Jon Webb died six month earlier, so she was signing as if he was still living, which may have been out of habit and 2) This was obviously sent to a friend from Lou Webb, meaning that she still had copies into the early 70's and that they appeared to have been unsigned by Bukowski.

Someone, especially anyone that read the Weddle book will probably have an idea abou this.

Also, for those that have signed copies of this book. Where was the signature page? Please let me know what page follows it...

my copy -which I got recently from PBA as well... sort of ;) - has the Bukowski signature in the very first page of the book -it's a purple page- and it's signed "Charles Bukowski 8-3-63" in silver ink. The purple page is followed by a blue one with a brief poem by Buk which goes: "small birds who go / the way of cats sing / on inside my page" followed by his signature (the poem and the signature are "letterpressed"). Then there's a yellow page with the title of the book on the top right hand side. Then there's a brown page with the title and lots of info. I hope this helps.

Hi Abel,
It does help. It seems that the purple signature page was removed and replaced by a pink page that was glued in. I'm not sure why anyone would do this. The pink page is not declke edged, but is old enough to be from 1972 and shows signs of age. This may have had the signature page removed, but why, in 1972 would anyone have removed the signature page unless it had a short Bukowski poem on it. I have seen a few of these pages in silver ink sell as poems on their own...

Still, a pretty copy of a damn beautiful book and a good deal...

bospress.net said:
Still, a pretty copy of a damn beautiful book and a good deal...
Click to expand... FL,
That seems to be the much rarer turquoise cover. Mine has orange in the place of the turquoise and the skeleton is printed in black, where this one is red.

The Webbs were artists. True artists.

Founding member
Mine is the ULTRA RARE "Question Mark" copy. Only 1-2 copies ever. And it was priced accordingly :D 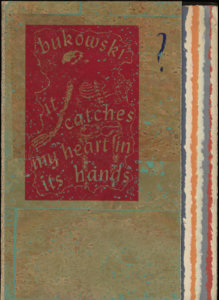 Bill, my inner cover -don't know the "technical" name- has the skeleton in black, while the outer or main cover has the red one.

The stories about them publishing his poetry are really wild. I'm talking about the care they went to, and the struggles they went through, and Buk's sort of modest elation at the efforts being made with his work.

At least that's how I remember reading it.

could you upload a pic/scan of your cover? I'm curious about the color variations...

I was looking back at the history of sales at PBA. It seems that a copy of this book signed by Bukowski to Ann Bauman (Menebroker) sold for $301 in 2001. Shit. I'd kill to pay twice that for that book today. I guess that all things considered, the market really is up...

Founding member
It's certainly up for some items, but it sucks for many others.

I noticed that when there's an important live auction at PBA, many items go for the low estimate, which is usually a very reasonable price.

Yes,you are right. I think that there are only so many people with the money to pay for these. At some point people have to make decisions and some items go for very, very low prices.

The best plan for the seller seems to be to let it out slowly....

bospress.net said:
That seems to be the much rarer turquoise cover. Mine has orange in the place of the turquoise and the skeleton is printed in black, where this one is red.
Click to expand...

Any idea what the numbers are on the quantities produced in different colours?
I've looked at the bibliography and the new Loujon book and there's nothing there.
P.S. - I have the 'rare' one as above only I was not aware that it was any more rare than the orange/black variant.

bospress.net said:
It seems that the purple signature page was removed
Click to expand... Is this not the MOST beutiful book ever publised?
I have a copy of the Miller "Order and Chaos" and thats a beuty also..
But its not Buk, ya know what I mean?
I love the photos.Why not go all the way and do every page?
Only jokin! Rich

Founding member
Rich: I think you're doing a fine job of translating your own poasts.
Please keep up the good work.

Father Luke said:
This one, right?
Click to expand...

So beautiful. A piece of art.

Rich is right that Order And Chaos is even more beautifully done than this book, but I would rather read the Buk. Loujon seemed dedicated to outdoing theirselves with each release, except for the last one (Henry Miller Insomnia or The Devil At Large), which is an odd release and unless you are talking about the 1 of 12 in box with original painting, not anything special.

Still the other three Loujon books were amazing.

bospress.net said:
Rich is right that Order And Chaos is even more beautifully done than this book, but I would rather read the Buk.
Click to expand...

In the new LouJon documentary someone (Weddle?) makes the point that the Miller LouJon books did not appreciate in value the way Bukowski's did because the content of the Bukowski books was better. So you aren't alone in rather reading the Bukowski books.

Founding member
i don't have this book but it was the first one, the very first that i ever looked at where i had to go to the special collections area of the library. white gloves, etc, wasn't allowed to take it out of the room. what a beautiful job of printing by loujon - and the poems to match of course. this happened in the detroit public library back in '02. it really was thrilling to hold this work of art in my hands. when i went back to look at it again one day like five years later it was gone. someone stole it. i must admit to being guilty of stealing a rimbaud paperback from slc library, but something like "it catches" is way to precious to steal and keep it hidden.

You're right. Every time when i looks at photos in google or something and i can't believe. Those books are beautiful. Books from Loujon looks like books with souls. Every single book looks different than other (not just because they have autographs). I wish that one day i'd see one copy in my hands.

It Catches My Heart In It's Hands

It Catches My Heart In Its Hands (wrap-around band?)

Another Fun Inscription IV - IT CATCHES MY HEART IN ITS HANDS

Yes, Another It Catches Variant...,