What's more, he's doing it with Gabor Csupo, the Hungarian-born animator and producer behind the first three seasons of "The Simpsons," as well as the subsequent Nickelodeon hit shows and movies "Rugrats" and "The Wild Thornberrys."

This weekend, Csupo's first-ever live action film, "Bridge to Teribithia," -- an adaptation of the family-friendly Katherine Paterson book of the same name -- will open nationwide for Fox and Walden Media. But he's not done with animation yet; Csupo's screenwriter on "Teribithia," Jeff Stockwell ("The Dangerous Lives of Altar Boys), helped fashion the new "Dead Love" script, which was originally penned by another prototypical Angeleno novelist and screenwriter, Bruce Wagner ("I'm Losing You").

Bukowski would be proud, largely because "Dead" is not a Saturday morning cartoon. Csupo tells TMZ that "How the Dead Love" is very much for grown-ups and more akin in tone to R. Crumb's ribald '70s animation classic, "Fritz the Cat" than, say, the Thornberrys' family-friendly "Darwin the Chimp." (Crumb, fittingly, was a frequent Bukowski collaborator, illustrating such iconic books as "There's No Business" and "The Captain is Out to Lunch and the Sailors Have Taken Over the Ship").

Depp will voice the main character of the film, and will also produce it with Csupo via Depp's own production company, Infinitum Nihil, which is part of the Warner Bros.-based film finance company, Initial Entertainment.

I'm not surprised whatsoever that more Bukowski stories are being brought to life in one form or another... his work is a virtual gold-mine of possibilities that can ignite the imagination of film-makers. I wouldn't mind seeing Depp, Sean Penn, or even Jeff Bridges in any Bukowski-related project; so Penn may still get his chance and be lucky enough to get paid more than a dollar... Bridges could do that great laid-back California style"”with humor!"”that Bukowski used to talk about, and none of these actors would need to have a face like a train- wreck in order to create something authentic in atmosphere... The problem with Mickey Rourke for me is that when he was reciting "The Tragedy of the Leaves" in front of the bathroom mirror, he had no idea what he was reading and his vocal inflections had nothing to do with the poem, showing just how limited he was as a performer... I haven't seen "Factotum," but I have a feeling from what I've read that it may be seriously lacking in humor, and I feel that if Bukowski hadn't cut loose somehow in those salad days and have a good laugh at it all, he'd never have made it... So surely there's a film-maker out there who understands that a good Bukowski project requires someone who knows how to read a good poem, with a sense of humor as a life-saver coming through from time to time as comic relief.

Hi,
I heard about this a few years ago. Seems that this has been in the works for a while. I'm sure that it will be amazing.,

Founding member
Indeed, I'm very excited for this as well. It's about time Depp got into something Bukowski-esq. i knew it was only a matter of time.

The Way The Dead Love as a cartoon? Sounds exciting!
Buk a la Simpsons maybe...

bospress.net said:
I heard about this a few years ago. Seems that this has been in the works for a while. I'm sure that it will be amazing.
Click to expand...

Quite a few years is right. I had a sit down with Klasky Csupo back in 2000 I think, and they showed me the script and story boards for this thing. I had completely forgotten about it, heh.

Does anyone have any new information about this? I'd be funny if Depp voiced Bukowski and all of the moms whose kids have Depp's pictures everywhere due to the Pirates trilogy suddenly decided that Depp had gone bad again and the kids needed some new decorations.
V

Hey Friends,
Why haven't I posted something for a long time and made an ass of myself? Who knows, maybe I've been busy drinking and writing. Finishing my second whiskey and ginger ale now. Maybe I can return with some obscenities later on. I love cannotski's motto :-)) And you all!

are you sure you're only on your second drink?
V

Quickly into the third now!!! Whiskey and tonic water, never tried that before, it tastes rather refreshing :-)

Creativity is the sudden cessation of stupidity -- is that from Buk?

Have to check the horses now :-)

mjp said:
Quite a few years is right. I had a sit down with Klasky Csupo back in 2000 I think, and they showed me the script and story boards for this thing. I had completely forgotten about it, heh.
Click to expand...

Klasky Csupo apparently had a web site showcasing some adult themed animations, including some Bukowski inspired tales at http://www.globaltantrum.com/ but its not online as I type this...

Here are some stills and you can view the episode called Horse Sense at: 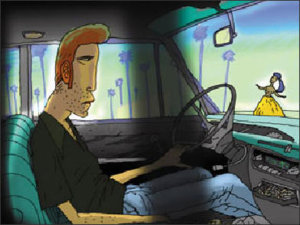 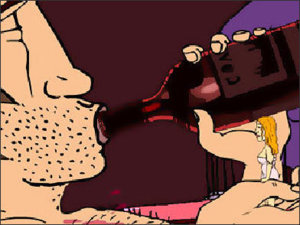 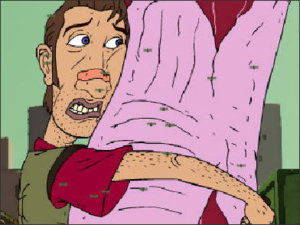 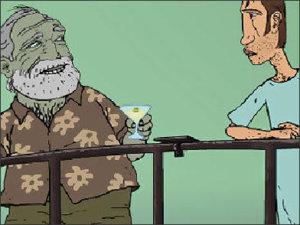 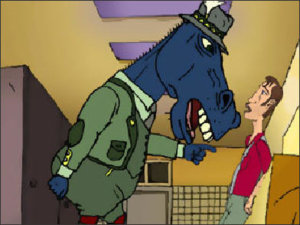 Founding member
The early script I read (sitting in an office with a secretary watching me the entire time - you would have thought this was the top secret script for CITIZEN KANE II or something) was pretty bad. It had a drawing of Bukowski as a duck on the cover, and when I asked them if that was what he was going to look like (the duck-man), they said, "Well, Vladimir (or something) and our creative guys are still working on that."

They got me in there on the premise that they needed to get some "grass roots" marketing going for the film, which they were quite certain would be completed very soon. So I talked to them for a few hours about web sites and other unmemorable bullshit and about halfway through it became clear to me that they were really just interested in me shilling the thing on smog.net.

That about sums up the meeting, but after reading that script I was sick for some time with the thought that these people were going to make an awful Bukowski duck cartoon and that would be his legacy somehow. Ha. Maybe now, after all the biographies and Born Into This and Factotum a duck cartoon wouldn't matter, but back then I think it would have been a catastrophe.

Founding member
I think that put some literature into cartoon it's just very hard. It must be change into something that people who don't know Bukowski (but wanna watch new cartoon) understand. And of course legions of Bukowski's fans like us should like it too. It's like water + fire. For me it impossible.

And Bukowski The Duck? Maybe the lost uncle of Donald?

Bruce Wagner Script for "The Way the Dead Love"

That is cool. I just bought the older script that Bruce Wagner wrote on Ebay for $17. The guy selling it says its the final draft and original copy.

Founding member
Can you tell us anything more about the script?

I have heard of that project and am waiting for its achievement. Does somebody have some good news about it ?
G

hank solo said:
Klasky Csupo apparently had a web site showcasing some adult themed animations, including some Bukowski inspired tales at http://www.globaltantrum.com but its not online as I type this...

Checked this site again today - 5 clips can be seen.

I notice that Bruce Wagner scripted these and provides the male voices too.

Founding member
Ouch! They gave him a huge cameltoe! Does anyone know whether these animated shorts are briefer versions of a longer project?
How about Johnny Depp producing "Women" and starring in it?
These are interesting and quite good in parts, but slightly off I think.

Ignore my second question, someone here has just explained me the meaning ! Berk.

when women wear tight panties, you can sometimes see a form, that looks like the toe of an artiodactyls.

To say, there's a cameltoe on a male wouldbe kind of an insult. To paint him like this (as they did) is just incompetence. To say, that they painted him that way (as mjp did) is the sad truth.


edit:
I was too slow! mods, please delete this post!

Reaper Crew
Moderator
Founding member
I think we should leave it roni, if only for the use of 'artiodactyls'.

Founding member
Yeah, you don't get to see that word every day.

roni said:
when women wear tight panties, you can sometimes see a form, that looks like the toe of an artiodactyls.

According to your link it says:

The male equivalent is a moose knuckle.:D

actually, I thought those animations were very well put together and the only thing lacking was a little more movement. It looked to me like these were very rough clips from a bigger production. well at least thats what I'm hoping.

David said:
Does anyone know whether these animated shorts are briefer versions of a longer project?
How about Johnny Depp producing "Women" and starring in it?
These are interesting and quite good in parts, but slightly off I think.
Click to expand...

Slightly off? I think the cartoons don't capture the feel/spirit of Bukowski at all...I was only able to watch three of those shorts. They suck. End of story. :mad:

Reaper Crew
Moderator
Founding member
In other old news, bits of this are currently on Youtube

Founding member
"I got them on eBay"? Oh my.

Founding member
Same lips as on the unidentified photo RIP
Found this crazy shit on You Tube today, can't find it in the forum, so here we go :

Part 2 isn't bad either: 'You killed her! She drowned in your semen!'

Founding member
That looks like something I had a meeting with some production company about a long time ago. I'd forgotten all about it until I saw these drawings. As I recall, their goal was to make a feature length film. But that had to be 15 years ago. I might still have the script around here somewhere.

Breakfast With Bukowski teaser from the animated short.

The Laughing Heart - A short animation

The Best Way to Get Famous is to Run Away