I thought The Last Poets were the first rap group.

Founding member
Well, you've got a point there. They may have been the first to sound similar to what rap would become, but they started years after the Jamaican toasters, and they were not a significant influence on the kids in the Bronx who created hip hop. Later generations of hip hop artists would credit them as influences, but that may have been after the fact.
M

Reading "THE MICHELIN GUIDE TO CALIFORNIA" and listening to the hum of my room heater.

Founding member
Look in the pocket, that's where it should be. On the one drop.

Founding member
I just don't want it to be over. But I've finished the last of the seven books.

No more Harry.
I'll miss you.

reading Kinky Friedman now for the first time (after two friends used to beg me to do so).
It's not hillarious, but he's o.k. Book: The Kite Runner by Khaled Hosseini
CD: Norah Jones "Not too late"

books i'm reading: le proces verbal by le clezio (love it so far), life of pi by yann martel (don't know if i like it so far), and shenzhen by guy delisle (graphic novel, love it).

Bed - Very good short stories. Weird and dreamy in a Miranda July sort of way. If you don't like her, you will really hate this guy. He took what she does to another kind of over-the-top level.

Eeeee Eee Eeee - novel-length weirdness of his shorts. I'm only halfway through but have laughed out loud several times.

you are a little bit happier than i am - poems. Not good unless you like poems about emails and instant messages. I don't. Didn't even finish reading this and it's really thin and I finish everything I start. Just to give you an idea how much I didn't care for it. Saramago is one of my fav's.

don't care for ol' tao lin, reader of depressing books. him and his ilk leave me flat. I can see the appeal to the "so ironic we're not even" crowd;)

also just reread some Hemingway stories and the power of "Indian Camp" is still astonishing. nobody builds an iceberg like that guy... Each one is individually hand painted by the author. Sunnyoutside does some really amazing work...

and thanks for the kind words bukfan.

I loves me some mark knopfler guitar playin'.

I'm really enjoying the Ken Tynan biog. written by his wife Kathleen. I've no interest in theatre but his life story is fascinating, there are plenty of great anecdotes involving John Lennon, Hemmingway, Capote and Tennessee Williams

Cd- the Ramones , It's Alive

the architect's brother by robert parkeharrison. 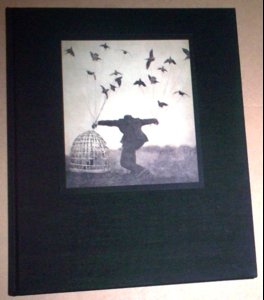 it's a stunning book of photography (my avatar is on the cover) by my favourite photographer. i didn't even know it existed until today, when jordan gave it to me as a graduation gift.
R

I RARELY buy CDs anymore. I need the money for beer... The last CD I bought was: Turbonegro- Retox


I'm almost always reading 3 books at once, just 'cause it keeps me from getting too bored. Right now I'm reading:

Werewolves in Their Youth- Michael Chabon

The Heart of the Matter- Graham Greene

CD: Burning Spear - Man On The Hills
Vinyl: Tshycovski (i can't spell) - Swan Lake
Book: Knut Hamsun - Growth Of The Soil (not a patch on his earlier works)

Neil Young- Live at Massy hall. I wish I had picked this up sooner.