Founding member
I just read that they found the info for JD Salinger's address on the 1940 census.
http://t.co/iipbf2GB
Maybe someone here can find 2122 S. Longwood Ave?
Perhaps it could add some info to the timeline?

I tried, but only got this far.

This sort of drudgery seems perfect for the magic collaborative synergy of the internet! :DD
Anybody?

That is assuming that Henry Sr. actually participated in the census.... 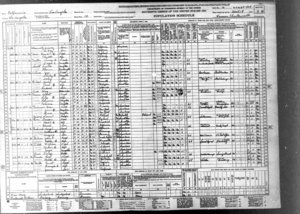 Does that say that the next door neighbor was a mail carrier? If so, did Bukowski ever mention that? Good job on digging that up.

I saw that too, but since it was 12 years from 1940 until he worked at the PO, I fund it hard to make a connection.

Founding member
Looks like Henry senior, the Museum Attendant, made 78 cents an hour in 1939 (the equivalent of $26,377 today). Seems hard to believe that junior made 55 cents an hour the very next year, in 1940, working in the stockroom at Sears. Unless Museum Attendant was/is just a really shitty job.

Doesn't seem like a shitty job though, considering the stated value of the house was only $4,200 (equivalent of $67,967 today). Compared to that, I suppose $26,377 wasn't such a bad salary. Even though that would be sub-poverty level now.

(zillow.com values the house at $355,400. More than five times the Consumer Price Index inflation value. Which goes to show you what a lopsided hunk of shit the California real estate market is.)

Note the mother is also listed at the bottom for "supplemental questions." Looks like both foreign born wives got those questions.

I think that this was random. Notice that line 68 is part of the form, not written. Because of this, they may have wanted to get a sampling of info without asking everyone the questions. They may have gone for 10% by picking 2 of the 20 lines to ask the addl questions.

Founding member
Yeah, I noticed that. Just seems...I don't know...fortuitous that both were foreign-born wives. ;)

I heard that the 1940 census was available late last week, but it didn't occur to me to look up Longwood. Nice work, both of you. It confirms the timeline info as correct. The 1950 census could be interesting, but they won't release that until 2022, and we all know the world is ending this year, so c'est la vie.

Founding member
The 1950 census will be available on April 1st.

Founding member
The 1950 census shows Bukowski and Jane at the Aragon on S. Westlake Ave. (apartment #35).
They are listed as married.
Bukowski's occupation is "shipping clerk" at a retail store, so that would have been Milliron's.
Jane's occupation is listed as "typing" at an advertising agency, her age is 35. Founding member
I had no idea Bukowski Sr. worked for the LA County Museum for over a decade.

Founding member
I see we don't have the 1930 census around here anywhere so I just looked it up.

Bukowski Sr.'s occupation is "Salesman creamery," which is the L.A. Creamery job. He reported his salary as $7,500. (That's $127,000 in today's dollars, which I thought seemed a bit rich for a milkman, considering his neighbors - an electrical engineer, cabinet maker, electrician, and an insurance agent - all reported smaller incomes. But then I saw that there is another creamery salesman on the page, and his reported income is $10,000! Apparently, it was a good gig?)

Founding member
The 1930 census form was already here, I should have known.

Was Bukowski in Jamesville in 1940?