I did a quick search and it doesn't look like this has been posted yet. Apologies if it's a repeat. Such an elegant piece! Founding member
[...] the ponderous nightmare insult of his empty eyes [...] 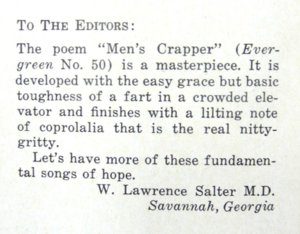 Johannes is back. And how.

Where you been, dude?

It's interesting because Bukowski had the poem Men's Crapper in two magazins during 1967, Intrepid and Evergreen. And it seems the same routine as with Aftermath of a Lengthy Rejection Slip and Story Magazine in 1944. Bukowski seemed proud to finally break into an established magazine only to find that his piece had been placed in the back pages as a kind of oddity.

A poem titled “Men’s Crapper,” published in Intrepid #7 (March 1967) was reprinted, with Intrepid editor Allen De Loach’s permission, in the December 1967 issue of Evergreen Review. Bukowski had been corresponding extensively since 1965 with poet Harold Norse, who would be instrumental in persuading Penguin editor Nikos Stangos to include Bukowski in the anthology Penguin Modern Poets 13 (1969), and, in all likelihood, Norse had also suggested Evergreen Review co-editor Seymour Krim that he print Bukowski’s work in the magazine. Krim, who had championed Kerouac, Ginsberg and other Beat and alternative authors in “girlie” magazines such as Swank and Nugget in the early to mid 60s, was probably delighted to run Bukowski’s poetry in Evergreen Review. Furthermore, Krim apparently had to convince the other editors of Bukowski’s stature as a poet, as Bukowski explained to Norse in November 1967: “a Seymour Krim … said he was trying to break down resistance and get them to take the poem” (Lilly, 3 Nov. 1967). The poem was indeed accepted and Bukowski would express to Norse his mixed feelings about being finally published in such a well-known and relatively respected periodical:

Got Evergreen 50 today with my short poem in there, way in the back, the thing is shot with the famous, so there they are: Tennessee Williams, John Rechy, Leroi Jones, Karl Shapiro … but the writing is bad … I am probably writing all this shit about Evergreen because I have a bad conscience and fear that I am slipping as a good writer in order to get into their slick pages. On the other hand, there is a kind of kid’s Christmas joy at opening the big stocking for the goodies. It’s nice … Who wouldn’t rather appear in Evergreen than in Epos, a Quarterly of Verse? (Lilly, 1 Dec. 1967)
Click to expand...

Evidently Bukowski was pissed off inspired enough by this to use it for his great Notes-Column from December 8-14, 1967 which starts:

"In the Dec. issue of Evergreen there is a small poem by one Charles Bukowski far in the back pages, and all through the magazine there is an interview of LeRoi Jones, poems by LeRoi Jones, ads for LeRoi Jones' last book, plus a speech by the departed Malcolm X--"God's Judgment of White America."
Click to expand...

now, THIS is our Johannes!
Again: welcome back!

This was the first Bukowski poem I ever read, although I remembered it being called 'The Crapper', not 'Men's Crapper'. It was in an anthology of (modern American?) poetry that I had in the 90's. If anyone can remember the book I'll be grateful. It wasn't the Evergreen magazine posted above. It was a regular book; tan/light brown coloured jacket.

Reaper Crew
Moderator
I reckon it was a magazine called Intrepid. Here's its cover: Nope, it was definitely in a book - a collection of American, or modern, poets.