Founding member
I never read this before, thought some of you might get a kick out of it. I don't think she really cared for it.

The 67-year-old LA poet Charles Bukowski wrote this semi-autobiographical script about his heavy-drinking skid-row days just after the Second World War, when he was a scrappy young man, in his mid to late 20s-a budding writer who was beginning to be published. But Mickey Rourke, who plays the role, imitates the tortoise movements of the battle-scarred survivor Bukowski, the writer-philosopher, the sage. This howler gives the movie a comic boost. Rourke twinkles with amusement at doing Bukowski, and the two principal women (Faye Dunaway as a burnt-out drinker, Alice Krige as the wealthy publisher of a literary magazine) twinkle back. The movie, though, is big on life affirmation. The hero isn't afraid to lose a fight or to hit bottom. And he isn't tempted by security. Offered the guesthouse on the publisher's estate, he snubs her; he calls her world "a cage with golden bars." (Of course, she's infatuated with his integrity.) Waking in her bed, he gets up saying, "I belong on the streets. I don't feel right here. It's like I can't breathe!" He goes back to his grimy haunts, where-we're supposed to believe-the real people are. This might be a film about the leader of a religious cult which was made by an altar boy. The director, Barbet Schroeder, wanting to please the Master, inadvertently exposes Bukowski's messianic windbag sensibility at its most self-satisfied. You wouldn't guess at Bukowski's talent from this movie. With Frank Stallone, J.C. Quinn, Jack Nance, and Fritz Feld. Cinematography by Robby Müller. Cannon Films, in association with Zoetrope.
Last edited: Oct 3, 2016

It's always fun to read reviews of Buk books and movies. This reviewer here seems to like the actors performances and probably also Bukowski, but not the movie. Oh well, even some Bukowski fans did'nt like the movie...
Last edited by a moderator: Dec 2, 2013

Digney in Burnaby said:
There is a longer review by Kael in the November 2, 1987 issue of The New Yorker
Click to expand...

I believe I posted that one before. Or not. :confused:

mjp said:
The director, Barbet Schroeder, wanting to please the Master, inadvertently exposes Bukowski's messianic windbag sensibility at its most self-satisfied. You wouldn't guess at Bukowski's talent from this movie.
Click to expand...

'messianic windbag sensibility', quite a mouthful :) 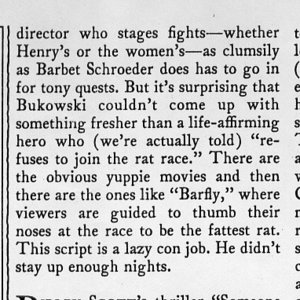