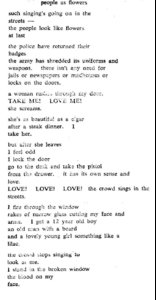 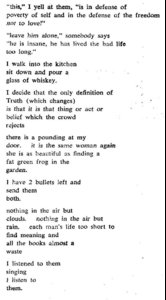 Founding member
The changes in this in the people look like flowers at last are minor, and typically odd.

And the last stanza was changed from:

I listened to them
singing
I listen to
them

I think the feel of that last stanza is changed by the "correction" of the grammar or whatever the hell they were doing. As with the majority of these kind of changes, I can't understand why it was made.

mjp said:
...As with the majority of these kind of changes, I can't understand why it was made.
Click to expand...

Because Martin obviously cannot shake off the hideous mental disease that keeps him believing a publisher is an author's collaborator.

Martin was also Buk's editor, or am I wrong? Of course, it is not the publisher's job to edit, but it is the editor's job....

Founding member
It is the editor's job to edit. I will just never understand the reasoning behind some of the changes, so maybe it's time I give up trying. ;)

Founding member
In a 2000 letter to Jules Smith, Martin claims NOT having done those changes. Apparently, B. sent the original version of the poem to a given mag and then he would send the reworked version for book publication. If you believe this, then we're talking about self-censorship.

cirerita said:
In a 2000 letter to Jules Smith, Martin claims NOT having done those changes. Apparently, B. sent the original version of the poem to a given mag and then he would send the reworked version for book publication.
Click to expand...

I'm sure Bukowski made his own minor changes once books were in manuscript form. But the "reworked version" story would contradict things Bukowski said in letters, most notably his anger with Martin over Women, which lays the foundation for the reality of Martin making changes Bukowski did not appreciate or approve.

It also seems very unlikely since Martin got either the originals or copies of what Bukowski submitted for publication, not separately typed pages. The idea of Bukowski sitting at a table doing a separate reworking of every poem he sent to Marin is actually kind of laughable if you think about how many poems, stories and letters he wrote. He would have been typing 22 hours a day. He described his method many times; type the poems at night while drinking, sift and revise the next day, submit. If what Martin claimed were true, wouldn't you expect to see a lot more changes than we do see?

I remember reading in at least one letter that Bukowski transcribed the manuscripts for some of his earlier books by typing up (copying, basically) what was in the magazines his poems were published in. If I can find that reference I'll post it, but I'm pretty sure this was in the early 70's and he was trying to pay a typist from the Open City or LA Free Press to do the chore for him. That gives you some idea of his lack of interest in the poems once they were done.

All this seems so ridiculous to discuss or debate, and in the case of novels, it probably would be. But I think poetry is different. It should go to the page the way the poet wrote it, and these post-Bukowski changes have always been of interest to me.

Founding member
I actually think it's ridiculous NOT to discuss this, be it poetry or fiction.

Founding member
I can't either.

And again, I'm not claiming he didn't rewrite, manuscript evidence clearly shows that he did revise and even recycle poems. Where I think Mr. Martin is stretching things is when he says that there were separate versions sent to, say, Wormwood and Black Sparrow. That would seem to be very unlikely.

One cool thing about having copies of so many manuscripts is in some cases you can see what is essentially same poem, retyped, revised and re-titled, dated many months apart. Since almost all of these manuscripts came from publishers other than Black Sparrow (he did not sign the copies sent to B.S., and these are almost all signed), these are not different versions for books, they are just different versions. Recycled poems.

The mechanics of how Bukowski wrote and submitted are interesting, as are the changes that we know he made himself. But we also know - without question - that changes were made up in Santa Rosa as well. But we will never know the scope of those changes unless Martin one day writes a biography (which he should, if he isn't already) and speaks frankly about the way they worked.

Not to imply that he's dishonest (I really don't want to get into any personality or character assessments of him again), but there are cases where he massages the actual facts. There are also cases where he appears to be confused about certain details (his mistaken recounting in Born Into This of a scene from Crazy Love as being part of Ham On Rye, for instance).

In the end it probably doesn't matter who changed what, and all we can do from where we sit is speculate.

One example I've found of this editing is from a couple issues of Prism International, the University of British Columbia creative writing literary mag, in 1985.

The Fall 1985 issue has two Bukowski poems: "Escape" and "Love Poem to a Stripper". Escape remains true to the manuscript found on this site. Love Poem has a variation when it made it to the book "You Get So Alone..."--lines 10 through 13 in Prism reads:

In "You Get So Alone" those lines read:

The word "drinking" was dropped for whatever reason.

The next issue of Prism, Winter 1986, had two more poems: "Sticks and Stones"and "The Luck Of the Blessed".

"Blessed" is the same as the manuscript on this site.

"Sticks and Stones" has a two variations from what is in Prism to what is in "You Get So Alone....":

Line 18 in Prism (hate to be so weird, but it's the only way I can think to explain this)
reads:

that's all you have

and in "Alone" reads:

The second variation is line 35 (hope I'm counting correctly). In Prism it reads:

outside the ski lift at

and in "You Get So Alone" it reads:

behind the ski lift at

which is probably both behind and outside so I'm not sure why the changes.

So why would B. be bothered with those sorts of changes? I mean dropping the "drinking" just doesn't seem like something he would do. After so many decades it was far past redundant, or even shocking, or humorous, it was just what he would've been doing.

I dunno, I've had editors and even type-setters change my words from what I sent in to what made it to the page. Everyone is an effing critic. End of seminar.
bp
P

I'd chalk it up to the poet's aesthetic. Either he felt that 'drinking' wrecked the rhythm (although it gave it a rhythm), didnt feel the word worked in that stanza or just got tired of looking at the letters D-R-I-N-K-I-N-G. Perhaps he found the word 'drinking' to be too glib or cliched for him at that time.
It's interesting to hear that Buk recycled poems, I know he recycled themes and that the poems would mesh into each other, reading like one big work. I guess I'm just naive, taking "Born into This" a bit too literally, that image of the under appreciated, hard working poet would didnt give a fuck, pumping out the poems and mailing them without a second thought.

Founding member
He did pump them out, but the "without giving it a second thought" part is a bit off. Sort of. He knew where he was published (and could often remember names and dates decades later), but there is a bit of a dichotomy, because earlier on - in the 60's mainly, before he started keeping carbons - he did forget who he had mailed things too, and forgot the poems themselves in many cases (see this letter where he has no recollection of a strong poem that was subsequently published at least five times, Something for the Touts, the Nuns, the Grocery Clerks and You: https://bukowski.net/manuscripts/displaymanuscript.php?show=letter1964-12-23-webb.jpg).

So he didn't start to recycle until he had the carbons there for reference. I have a few examples, but can't point to them right now, but it definitely appears that he had the carbon there in front of him and retyped the poem, changing it sometimes quite a bit, sometimes just a word here and there.