Just finished reading Hitler Painted Roses for the third time, and I know that some of you aren't the biggest Richmond fans by reading previous threads, but I was wondering if you knew of any Bukowski poems that directly reference Richmond. There has been a lot made of their relationship, their letters back and forth, and so on, but it doesn't seem that Steve comes up much in Bukowski's poems. This is somewhat surprising since Bukowski references his friends, idols(Fante) and esp. his publishers(Martin etc.) a great deal throughout his works. But I could be completely wrong.

"300 Poems" in Mockingbird Wish Me Luck is about Richmond.

Thanks marina del ray, that's exactly what I'm looking for. Any others come to mind? And how's the start up of Milk coming along?

There is also an unpublished poem called A most serious fellow:
https://bukowskiforum.com/showthread.php?t=1038&highlight=most+serious+fellow
S

That's the one I was thinking of but couldn't remember the source or title. Thanks, Ambreen.

Not a poem, but there's also the dedication to Steve in one of Bukowski's books -- I forget which one.

Thanks, Ponder. What a gorgeous copy that is, with that colorful cloth spine and the blazing orange boards. Guess I was dumb buying the soft covers as they came out and saving a few bucks each time.

Rekrab said:
Not a poem, but
Click to expand...

This is probably Buk's last letter to Steve,
a little bit more than a year before Bukowski passed away.

Hello Steve:
52? Shit, man, you're getting old! The babes are going to be watching
these young black guys walking the boardwalk. (Get you mad at me, you'll
write some good poems).
Well, you've got to admit you didn't get sucked into the ordinary. You
could be sitting in some lawyer's office (as a lawyer) getting pounded into
imbecility by the demands of your station. You've held out down by the
shore, it's your fort and you have your own individuality which I don't
always agree with but at least it's yours. And I still have this vision that
some day a large tome of thousands of Richmond poems will be promulgated
and the young groupies will be banging on your door seeking your
body and your new fame.
Keep it going. And when you're able to feel good, do it, don't fight it.
hold, and continue,

That's from the Reach for the Sun Vol.3 right? Any other letters in there between the two? From what I've read toward the end Bukowski lost some of his respect for Richmond, and that letter catches it well.

There are a pretty good number of letters between Buk and Richmond out there. I don't believe that very many of them have been collected, though. You'll see them turn up on eBay now and then.

If you haven't already read it, I suggest having a look at Richmond's book Spinning Off Bukowski. It gives a pretty good look at their relationship from Richmond's perspective.


DirtyJersey13 said:
Thanks marina del ray, that's exactly what I'm looking for. Any others come to mind?
Click to expand...

The only two poems that immediately come to mind for me are the two that were already mentioned. "300 Poems" supposedly hurt Richmond's feelings quite a bit and he almost overdosed because of it (or so the story goes, at least). I'm almost certain there are more that reference him, though - I'll have to take a look.


DirtyJersey13 said:
And how's the start up of Milk coming along?
Click to expand...

Thanks for asking - it's coming along great. The first issue should be out in early July.

Yes Marina del rey , I have Spinning off Bukowski somewhere, most likely in one of the boxes yet to be unpacked. Like I mentioned before, so much has been made of the letters between the two of them, but when it comes to their relationship showing up in Buk's poetry... not so much. And I'll be looking forward to 1st edition of Milk this summer then, get enough subs?

Isn't there a moment in Spinning Off Bukowski (maybe at Buk's wedding) where Bukowski is saying "Gagku" and laughing, basically making fun of Richmond? I glanced at the book and couldn't find the moment-- just Linda saying, "There are no demons here, Steve," which is also painful.

Maybe the chapter I'm thinking of was in Wormwood Review. Maybe I'm making it up (I hope not).

Bukowski, in a lot of ways, blindsided a whole generation of small press writers. They never got over his fame and talent and spent way too much time writing about him.

Of course I read every fucking thing they publish.

dave said:
Bukowski, in a lot of ways, blindsided a whole generation of small press writers. They never got over his fame and talent and spent way too much time writing about him.
Click to expand...

Except generalizing and insulting good writers like David Barker and many, many other good writers, you have no idea what you're talking about.

But hey, what do I know :rolleyes:

Speaking just from my own limited perspective, I think writing about Bukowski was additive for Richmond. It didn't take away anything from his other work. He wrote far more non-Bukowski poems than poems about Bukowski, I would bet, and his non-Bukowski work wasn't hurt by his Bukowski poems. I don't know that Steve would have been any better if Bukowski had never existed, and he might not have been as good as he was. Bukowski woke us up. He set the bar high. Without Bukowski's example, we would have been aiming much lower. In my own case, his insulting me forced me to develop outside of the inner circle. It forced me to go it alone or just give up. I think it became a strength after I got over the initial hurt and outrage. I would thank Bukowski for it if I could.

I wasn't insulting anyone. And I'd never heard of David Barker until two days ago when someone on the board recommended him.

I was thinking specifically about Steve Richmond, John Thomas, and Ben Pleasants. I read them as part of the Bukowski puzzle. Maybe I read them for some insight into Bukowski's life. Or maybe I just read them for gossip. But I've never found anything by Richmond, Thomas, or Pleasants that interests me when they're writing about anything that's not related to Bukowski.

dave said:
...I've never found anything by Richmond, Thomas, or Pleasants that interests me when they're writing about anything that's not related to Bukowski.
Click to expand...

I also think 'blind-sided' was an appropriate choice of word. Bukowski didn't 'cripple' a generation of writers, as some have suggested, but he sure knocked the wind out of a great many.

Of course the best writers were always going to rise to whatever challenges they encountered.
Last edited by a moderator: Dec 2, 2013

Fair enough. I would have (and did) read Richmond if/when he wasn't writing about Bukowski. I discovered him about 1969 and thought he was way ahead of every one else his age, and didn't know he was friends with Bukowski until years later. His Bukowski tales are amusing but I never thought they were the main attraction. The Gagaku/demon poems are where he was doing original work. Not to everyone's tastes, but it worked for me. You could toss out all of his Bukowski mentioning and it wouldn't lessen him in anyway, to me. John Thomas never did much for me; one of those poets who make a career out of not writing and recycling the same few poems over and over. Ben Pleasants I don't know enough about to discuss.
S

Ben Pleasants = Rona Barrett with an axe to grind. apologies to Ms. Barrett

Holy shit a Rona Barret reference, within a Bukowski forum, now that takes some skills. She had the craziest book titles, like How You Can Look Rich and Achieve Sexual Ecstasy, probably a best seller on Amazon.

And Dave, if you didn't know who David Barker was, you certainly will now. He's all around here, literally.

Check out this early mention of Steve Richmond: 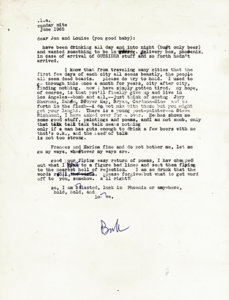 Nice. Thanks Saywhat. It's good to see this early Buk letter treating Steve with due respect.

1965, that's one of the earliest ones I've seen. And it says in the letter that he invited Richmond over for a beer, now that's unheard of. I never knew Bukowski would do such a thing, he always complained about people coming over with a 6 pack and wasting his time. He does have a soft side...kinda.

DirtyJersey13 said:
1965, that's one of the earliest ones I've seen... invited Richmond over for a beer... I never knew Bukowski would do such a thing.
Click to expand...

The reason he did it was probably because it was so early in his career. I think most of his complaints about visitors came later, after he had some fame.

I also think he probably exaggerated how much he disliked all that stuff, anyway.

marina del rey said:
I also think he probably exaggerated how much he disliked all that stuff, anyway.
Click to expand...

Rekrab said:
Nice. Thanks Saywhat. It's good to see this early Buk letter treating Steve with due respect.
Click to expand...

It's probably the earliest ones that I've gotten my hands on. Loujon, Sherman, Bryan, Frances & Marina, Richmond... Buk covers a lot of ground in that letter.