Short and sweet. sorry if I sniped this from a member here. 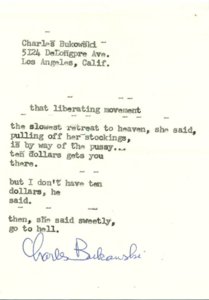 Founding member
I wonder if that is the same as this:

I suspect it is.

i just looked in my copy of Interpid 18/19 and it is the exact same poem and it is called that liberating movement in the magazine. The database has a typo.

The poem that was shown is obviously a carbon copy and he has having trouble with his typewriter. i used to have a poem carbon like that, but had to sell it. I believe that it dated to the late 60's, early 70's... The fact that it was published in 1971 fits with that time.

bospress.net said:
The database has a typo.
Click to expand...

Thanks for the info. I'm going to be asking for help from everyone with quite a few magazine lookups in a few days. I'm narrowing down the alternate title info, and some of them I can't check because I don't have any of the magazines.

I had a liberating movement this morning... Oh, wait... sorry, yes a good poem. Nice and short.

please liberate yourselves as you promised to do - Transit #1, 1993

The Spirit That Moves Us, another horse poem for all my many dear friends...