Just bought this for a reasonable (cough) price. What I find kind of interesting is that this had to have been written between 1959-1963/64, but wasn't published until 1969 in Hearse. 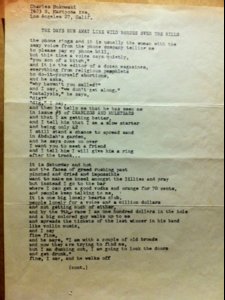 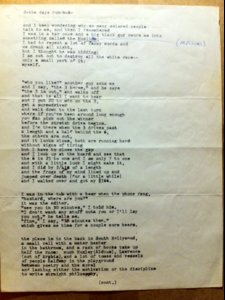 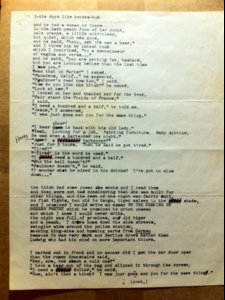 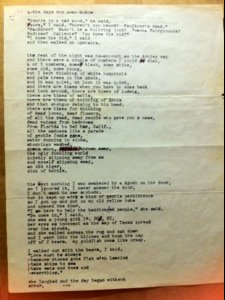 Founding member
Hearse started in 1957 and ran for 9 issues until 1961. It wasn't until 1969 that E.V. Griffith started publishing it again. My recollection is that one of the things that prompted him to start again was him finding some 'lost' manuscripts that he had received but never published... Griffith recounts this, I believe in SHEAF, HEARSE, COFFIN, POETRY NOW: A HISTORY (Hearse Press, 1996)...

Thanks for posting that. We don't get to see many early ones. The images are small, but they're better than the no images of it we had previously. ;)

He says he's 42 in the poem which would make it late 1962/early 1963. Pretty sure he used the same typewriter the entire time he was at Mariposa, so that can't help to narrow down the date any further on this one.

And he mentions the death of Faulkner a couple of times. Faulkner died on July 6, 1962.

funny thing are the little inconsistencies in the headlines:
2-the days run-buk-
3-the days like horses-buk
4-the days run away-bukow

Founding member
Found the passage in SHEAF, HEARSE, COFFIN, POETRY NOW: A HISTORY (Hearse Press, 1996) on page 23:
"I let HEARSE lapse in 1961, because of other obligations. In 1969, two things happened which brought me back to publishing again. In culling some old files, I found a hefty envelope of unpublished Charles Bukowski poems, which Bukowski had apparently sent me some time previously (the postmark-date was not readable), but which I had filed away and forgotten. Among these manuscripts was the long poem 'The Days Run Away Like Wild Horses Over the Hills'. I wrote Bukowski, asking if this poem was still available, and saying that reading the poem made me itch to start publishing again. He replied that the poem was still unpublished, and that if I wanted it for HEARSE, I could have it." -- E.V. Griffith

'my goldfish swam like crazy.'
The goldfish was still alive. A couple of months later the goldfish was dead - I thought of ships, of armies, hanging on...
"Jane's goldfish, which he had taken from her room at the Phillips Hotel after she died,..."(Sounes, pg.53).

Goldfish? There is no doubt that I am on the road to become a Bukowski nut.

Founding member
Thanks to the generosity of Dr. skiroomalum, we also have a larger scan if you'd care to take a gander.

her eyes as innocent as the map of Texas spread
over the clouds, :D

What appealed to me about this ms (beside the poem itself) was the fact that something like this wasn't already in a permanent collection somewhere. What Jason dug up about Griffith's finding this years after it was written, is one of the innumerable reasons this site is so valuable. I'm glad you guys dug it. Thanks.

Out of curiosity, what is the price range for a 1960s typescript, signed poem these days -- as opposed to a carbon?

The Days Run Away...

Who is the owner of the manuscript The Tragedy Of The Leaves?