RIP
Was the first novel I've ever read.

What was the first novel you've read.
S

Gee who can remember that far back? I remember reading 30 seconds over tokoyo in grade school and digging it - don't know who it's by. Naked Lunch by Burroughs I read as a teen and was impressed.

I like Camus and though not my favorite I think it's a pretty neat book.

slimedog said:
I like Camus and though not my favorite I think it's a pretty neat book.
Click to expand...

I was 16 when I read the novel. I was impressed.

The Martian Chronicles by Bradbury when I was about 10 years old and grounded for a weekend. Hell, I did not want to go outside anyway....

Wow! That is an incredible question. I'm gonna' have to say Salem's Lot at around 12 years old. Does that count? CRB:)

Of Mice and Men by Steinbeck.

Geez, novel? Perhaps A Wrinkle in Time by Madeline L'Engle. If that counts. Fifth or sixth grade? Maybe something before that, but it's unlikely.

Back to Camus. He's my second favorite writer after Buk. Very different, of course, but at least Buk didn't hate him. Had some sideways compliments for him in poems I've read. Not that it matters much.

Edit: Well of course; I read Jules Verne's 80 Days Around the World and H.G. Wells' The Time Machine and a few others in about third grade. Perhaps Treasure Island?

I've just been shelving books in our new home, and some of those old paperbacks were among them. Hmmm...gonna have to look more closely. Just because I read it when I was 8 or 9 years old doesn't mean I shouldn't read it again.

Okay, you guys are making me think now. I read, The Red Pony in about fourth grade. I really hated that book, I can't even tell you why, but it upset me. Today I can't even remember what it was about.

It was about a red pony.

Thank You Mr. Smarty, but didn't something awful happen? Did they kill it or something? I really just remember being so mad they they made us read it becuse it made me feel so horrible...

I think the first novel I read was The Adventures of Tom Sawyer and Huckleberry Finn around 4th or 5th grade, but that's such a long time ago, I can't say for sure. Another really early one for me was To Kill a Mockingbird (which, come to think of it, may have been the first).

chronic said:
I think the first novel I read was The Adventures of Tom Sawyer and Huckleberry Finn
Click to expand...

But those are two novels.

The Black Stallion by Walter Farley. I was about 9 or 10 and that story blew me away completely.

If we're not counting "kid's stuff" or classroom assignments, then Raise High The Roof-beam Carpenters was the first I sought out on my own. Oops - that's a twin novella. Okay, how about Stranger In A Strange Land ?

Okay, I just wiki'd The Red Pony, not only does the BORING-NESS come back to me, but there is a scene in which the mother horse dies(after being cut open), while giving birth to the pony. The boy who felt bad about this was treated like shit for it (of course), Hence my dislike of the novel as an 11 year old female child. Shit, as an adult too!

Purple Stickpin said:
But those are two novels.
Click to expand...

Give me a break... I just spent two days at Disneyland in 90° heat. My brain is a little overcooked and I have blisters on my feet (but Soarin' at California Adventure was uber-cool)
S

One of my favorite books and I didn't read it until I was 40.

I guess the Fall would be called a "post-punk" band.

You know because I had a very hard time reading, probably due to dyslexia, I never read that novel Of Mice and Men until I was 15 or 16. Bukowski and Steinbeck are very easy to read compared to almost anyone. But my fourth grade teacher read us all of the Laura Ingalls Wilder books. That was quite sissy to have to sit through most of the time.

Hey can we count Dr. Seuss?

Nope, he's a poet, not a novelist. You know, one fish, two fish, red fish, blue fish; green eggs and ham; The cat in the hat...Surrealist poet...

To me, at that time and my age, Dr Seuss was a novelist.

My memory has been jarred. My first novel-maybe a short story- was Ernest Hemingway, The Old Man and the Sea when I was 13.

And can we count Noddy ?

the first novel i REMEMBER reading was American Psycho....I was very young (about 9 or 10) and had quite an advanced reading age and picked it off my parents bookshelf because of the nice cover(it was the very cool first edition hardcover...which unfortunately my folks threw away when we moved house)...nevertheless I got halfway through and felt incredibly nauseous...so i stopped....and never finished it.....

I remember reading Frankenstein and being scared shitless from my 7th birthday until pretty much... 11 or 12.

After that, I read a lot of crappy kids series (being a kid) and eventually moved on to almost 8 years of bad fantasy novels (with great titles like Elvendude) and Dean Koontz. Yeah my literary life was pretty shitty until 19 when someone recommended Fante to me. After that, I recall never buying another Koontz book, buying three other Fante books, and then picking up Post Office.

By "thank Christ," I hope you mean "thank life."

Not exactly sure which was first but the novels that I really got into as a very young reader were The Chronicles of Narnia and loads of Roald Dahl's books.
B

It was either Shelley's Frankenstein or Capote's In Cold Blood. Can't remember which. I was about 10 or 11. I'm almost certain this was it....

First novel I ever read end to end is Theodore Dreiser's An American Tragedy.

The Lion, the Witch, and the Wardrobe, a gift from my 3rd grade teacher. I cried when they "killed" Aslan, and didn't realize at the time that he was essentially Jesus in a cat costume. I read The Winter of Our Discontent not too long after that, for some reason. When I really got rolling as a reader at 11, it was a lot of Piers Anthony and Stephan King (starting with the Stand).

I remember reading a book about a small boy who was actually a small devil who came to a normal family and made a mess of everything. Kind of an ALF from hell, educational in a 'don't do that-don't do this' way. I was a child then and I can still visualize the cover, but can't remember the author and title. This must have been the first one.

Michael Ende's Neverending Story must have been next. I loved the book and read it a couple of times. Fascinating it was.

Thanks for spoiling the surprise of my next Halloween costume.

Reaper Crew
Moderator
Founding member
so, you're not going as Rum Tum Tugger, then? 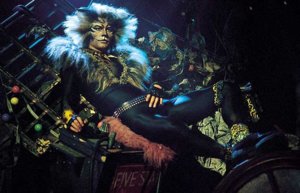 jesus man, make up your mind!

Founding member
Fuck, man, I'm not telling any of you assholes my plans ever again! All you do is ruin the surprise!

I hope it's not too late to get a refund on the costume I bought for New Year's Eve. I'm sure someone has already ruined that surprise too.

You didn't just ruin the surprise. You ruined the movie!:mad: