I'm trying to locate a short story or poem about the red baron
can anybody help ?

The only one I heard of I think his dad tore it up. Then he may have rewritten it.
Welcome I'm a novice here.
J

Thanks for replying,
I was sure there was a story about some sort of WW1 character but maybe i'm wrong
cheers

Hi,
I think that you are right. Wait for Hank Solo to chime in. He can probably tell you all of the poems and stories that mention the Red Baron....

bospress.net said:
Wait for Hank Solo to chime in.
Click to expand...

Thanks Bill. The Red Baron does crop up in a few poems but the reference is usually marginal, like referring to a photo of him, or a comic book or something. I can't think of any poems just about him of the top of my head.

Regarding the story Bukowski wrote about him when he was a teenager - Bukowski writes about this missing story in Chapter 34 of 'Ham on Rye', just broad strokes really about his adventures.

Maybe someone else can think of a better reference.

I think the story you are thinking of may be from the poem "dog fight over L.A.".

Or maybe not. No red baron, but clearly a WWI flying story of sorts.

The next day in bed I got tired of waiting for the airplanes and I found a large yellow notebook that had been meant for high school work. It was empty. I found a pen. I went to bed with the notebook and the pen. I made some drawings. I drew women in high-heeled shoes with their legs crossed and their skirts pulled back.
Then I began writing. It was about a German aviator in World War 1. Baron Von Himmlen. He flew a red Fokker. And he was not popular with his fellow fliers. He didn't talk to them. He drank alone and he flew alone. He didn't bother with women, although they all loved him. He was above that. He was too busy. He was busy shooting Allied planes out of the sky. Already he had shot down 110 and the war wasn't over. His red Fokker, which he referred to as the "October Bird of Death," was known everywhere. Even the enemy ground troops knew him as he often flew low over them, taking their gunfire and laughing, dropping bottles of champagne to them suspended from little parachutes. Baron Von Himmlen was never attacked by less than five Allied planes at a time. He was an ugly man with scars on his face, but he was beautiful if you looked long enough -- it was in the eyes, his style, his courage, his fierce aloneness.
I wrote pages and pages about the Baron's dog fights, how he would knock down three or four planes, fly back, almost nothing left of his red Fokker. He'd bounce down, leap out of the plane while it was still rolling and head for the bar where he'd grab a bottle and sit at a table alone, pouring shots and slamming them down. Nobody drank like the Baron. The others just stood at the bar and watched him. One time one of the other fliers said, "What is it, Himmlen? You think you're too good for us?" It was Willie Schmidt, the biggest, strongest guy in the outfit. The Baron downed his drink, set down his glass, stood up and slowly started walking toward Willie who was standing at the bar. The other fliers backed off.
"Jesus, what are you going to do?" asked Willie as the Baron advanced.
The Baron kept moving slowly toward Willie, not answering.
"Jesus, Baron, I was just kidding! Mother's honor! Listen to me, Baron . . . Baron . . . the enemy is elsewhere! Baron!"
The Baron let go with his right. You couldn't see it. It smashed into Willie's face propelling him over the top of the bar, flipping him over completely! He crashed into the bar mirror like a cannonball and the bottles tumbled down. The Baron pulled a cigar out and lit it, then walked back to his table, sat down and poured another drink. They didn't bother the Baron after that. Behind the bar they picked Willie up. His face was a mass of blood.
The Baron shot plane after plane out of the sky. Nobody seemed to understand him and nobody knew how he had become so skillful with the red Fokker and in his other strange ways. Like fighting. Or the graceful way he walked. He went on and on. His luck was sometimes bad. One day flying back after downing three Allied planes, limping in low over enemy lines, he was hit by shrapnel. It blew off his right hand at the wrist. He managed to bring the red Fokker in. From that time on he flew with an iron
hand in place of his original right hand. It didn't affect his flying. And the fellows at the bar were more careful than ever when they talked to him.
Many more things happened to the Baron after that. Twice he crashed in no-man's-land and each time he crawled back to his squadron, half-dead, through barbed wire and flares and enemy fire. Many times he was given up for dead by his comrades. Once he was gone for eight days and the other flyers were sitting in the bar, talking about what an exceptional man he had been. When they looked up, there was the Baron standing in the doorway, eight- day beard, uniform torn and muddy, eyes red and bleary, iron hand glinting in the bar light. He stood there and he said, "There
better be some god-damned whiskey in this place or I'm tearing it apart!"
The Baron went on doing magic things. Half the notebook was filled with Baron Von Himmlen. It made me feel good to write about the Baron. A man needed somebody. There wasn't anybody around, so you had to make up somebody, make him up to be like a man should be. It wasn't make- believe or cheating. The other way was make-believe and cheating: living your life without a man like him around.
Click to expand...

hank solo said:
Bukowski writes about this missing story in Chapter 34 of 'Ham on Rye', just broad strokes really about his adventures.
Click to expand...

...Then I began writing. It was about a German aviator in World War 1. Baron Von Himmlen. He flew a red Fokker...
Click to expand...

hank solo said:
Bukowski writes about this missing story in Chapter 34 of 'Ham on Rye'
Maybe someone else can think of a better reference.
Click to expand...

...Then I began writing. It was about a German aviator in World War 1. Baron Von Himmlen. He flew a red Fokker...
Click to expand...

It could be in the attic on Longwood Avenue, his boyhood home.
J

Thanks guys,
The chapter in Ham on Rye is the one i was looking for you guys really know your stuff
thanks again
Jockabilly 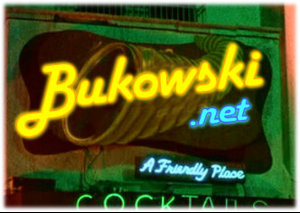 (Look I spent a good 10 minutes photoshopping that sucker, so if I want to post it again, I think that's okay!)


Jockabilly said:
Thanks guys,
The chapter in Ham on Rye is the one i was looking for you guys really know your stuff
thanks again
Jockabilly
Click to expand...

We try. Although I guess really we shouldn't...

hank solo said:
(Look I spent a good 10 minutes photoshopping that sucker, so if I want to post it again, I think that's okay!)
Click to expand...

It's okay. I think you can post it many more times without apology.

Reaper Crew
Moderator
Founding member
great. now I'll have to watch that tonight.
thanks. thanks a lot.
fuckers.
:D

hank solo said:
Anyone else hear playing around here?
Click to expand...

i thought it was the neighbor. i was
gonna go holler at him. Thanks, hank solo.

hank solo said:
Anyone else hear playing around here?
Click to expand...

I like that girl with the baby blue dutch boy hat. She looks so submissive on the floor like that. :cool:

G
If something burns your soul with purpose and desire, it’s your duty to be reduced to ashes by it.