I hope this wasn’t discussed before, I couldn’t find any information over here, in the database or anywhere else. So I’m asking for details about this very little chapbook(4”x 5,5”). I bought it some weeks ago and it does not look very official. There is no copyright information included except the statement “Racetrack Press 1994” on the back.

But the content might be interesting. There are four poems included. I checked the database and noticed that three of them are altered in comparison to the official (posthumous) BSP publications. The fourth was already published in “You get so alone…” in 1986. I’ve made some comparisons in case someone is interested, but I wasn’t able to find any manuscripts and I don’t own the magazines these poems officially appeared in. So I don’t know the source and I don’t want to spread any wrong information which can’t be deleted later and is married to the www forever.

So first of all: Is this chapbook familiar?

Otherwise (and if there is interest) I can post the poems included for more research and comparison. I'm by far no expert but it looks cool. I wish more Ecco books, besides being accurate, had covers like that. :)

A bootleg for sure. I have not seen this before. Interesting. This could easily go to the "rape" thread, but can stand on its own. The new guy asks very good questions.

Great. I hoped for this. So the chapbook seems to contain legit poems, at least this one. I will post the others later, here is a fast and plain comparision of this one 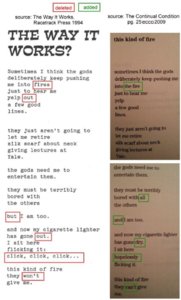 Here is another one, unfortunately there is no other source than the chapbook and the official BSP release.

Ah
There are four poems with this title in the database, this one is published in Bone Palace Ballet - pg. 150 – 1997. I noticed 6 changes and probably two misplaced commas in the official release of “Bone Palace Ballet” (at least in my BSP paperback edition). 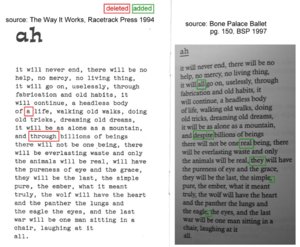 Roni, this is a true German OCD fan like yourself. Keep him in good company. We need detail-oriented readers to keep the spirit alive. Take him under your wing, but please don't feed him any of your Romanian vodka/moonshine...

marina del rey, thank you very much for the scan. could you upload the poem "Coffee", too? According to the database this was released in Wormwood Review No. 140 - Page 190, too.

OK, thanks to google I might have found a source for the poem ah by myself:

There is a publication called willow springs. According to their homepage they published the poem ah in issue 29 in winter 1992. And according to this pdf on their homepage, the version seems to be the same that is included in the chapbook/bootleg and which I posted in #8 for comparison. I'm a little late, but to complete this:

It's the same version with year of origin in 1985 that also appears in the chapbook. The poem was released by BSP one year later (You Get So Alone At Times That It Just Makes Sense - pg. 126 – 1986) and both versions vary slightly in just one word (“he looked forward then.” altered into “he looked away then.”)

“The Way It Works” (Racetrack Press 1994) is a bootleg which contains the following poems:

A question ... and small-press mag missing from Works database

The Mathematics of the Breath and the Way

Upcoming: The Mathematics of the Breath and the Way

Ad for Run With the Hunted chapbook, 1963 (chapbooks for a dollar)