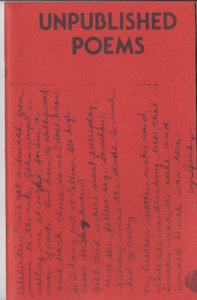 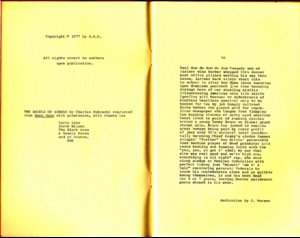 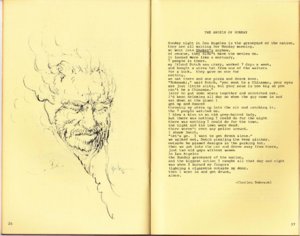 I bought this at a garage sale in a milk crate full of poetry books dating from the late 60's to mid 70's as i was scanning through them i noticed it was signed Buk i scanned the names and sure enough charles bukowski has a poem in it. there are several other signatures on this page also. there were a few copys of this book only this one was signed. The guy i bought them from had no idea what they were and charged me $5 for the crate. Heres the scans, let me know what you think.

this is the page with signatures, thanks. 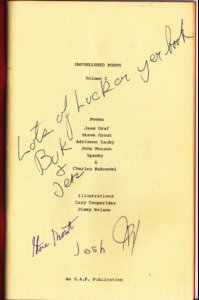 Founding member
That might have been a "book" project, but what came out was a little magazine with several poems, including B's.

Founding member
I don't know what you've got on that signature page, but it's good to read the uncollected poem.

Moderator
Founding member
Lots of Luck on yer book ​
Buk​
+​
Jen? or Jess?​
Looks like Bukowski's handwriting to me, but impossible to be certain. I'd keep that one anyway.

I think it says Jess, as in Jess Graf maybe, he's also on the list of authors.

Moderator
Founding member
Could be.


S.A.P. - Society for the Advancement of Poetics​
Jess (Jessie) Graf - a former marine and a college athletics coach​
...apparently. Now we know.

Founding member
The thing is, I don't get the signing of the two names (Bukowski didn't even do that on the Christmas cards he and Linda sent out) along with that inscription. It looks to me like someone saying, "Lots of luck with your book, Buk and Jess." Like a sentence rather than an inscription.

But like you said, there are some similarities in the writing style. I dunno know though. By the mid/late 70s he was pretty much all about the block letters. And the "Buk" - I don't know. Who is Josh? Looks like someone's seven year old wrote that.

If someone was trying to sell that to me as a Bukowski signature I don't think I'd buy it. On the other hand, if I found it at a yard sale, I'd keep it. ;)

I found on the back page a poem By Josh it is printed in all the books on the back page, maybe one of the authors children? either way he evidently signed it too. heres a scan of his poem. and to me the signature of Jess looks a bit different than the rest of the sentence, like the sentence was written and signed buk and + jess was added. Its a mystery to me. the other signatures are Steve Grout and possibly JM=(John Munson) Or JN=(jimmy Nelson) illustrator. Munson dedicated this book to neal cassady with a poem in the front of the book. and several of the poems mention Denver CO. in them, which is 280 miles from where i live. and a few of the other poetry books that were in the crate came from regis college Denver Colorado the are literary journals titled rebus 4 seperate publications 1965 thru 1968. 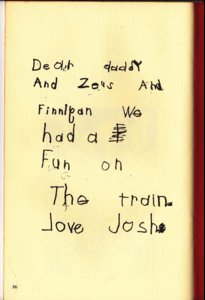 hard to decide, as there's only one letter in both parts of the writing "e" and this one looks pretty similar, I think. Also, the name looks more like 'Jetz' to me, but of course that wouldn't apply to anybody of these contributors.

I go with mjp, that a signing of two names would be a strange thing for Buk to do, but I disagree that this looks like a sentence saying "good luck" TO Buk + Jetz. This would imply, that this was Buk's (and Jetz' !) own copy and the sentence meant as an inscription to them, right?

in case you meen the tag on the bottom-right, I'd say, that's 'Cary' as in Cary Cooperider.

Oh, and welcome aboard.

Very cool garage sale find. I vote for the theory that Buk inscribed and signed and someone else added "& Jess" or whatever that name is. What a strange flucky item. That was your lucky day.

Yes this is by far one of my Lukiest days. I am in awe that this book found me. I first read post office about 15 years ago and since that day bukowski has become one of my favorite authors, the others being HST, Kerouac, Burroughs, and Chuck Palahniuk. I have always wanted a signed book of these men, (which the exception of palahniuk, I have several) but never thought it would happen. Due to the amount of money that they command, and the worry they would be fake off ebay. I believe that this is -his- signature due to the nature i found the book. For one It was found along with many other poetry publications and an extra eight copies of this book alone. Leading me to believe it at one time was owned by someone who was involved with Poetry and the book itself. Also the gentleman i bought it from had not known what the books even were, much less the inscription, so he wasnt trying to scam me for my $5. and wherever he got them from he evidently wasn't scammed either. It simply amazes me that i showed up at that sale, (i wasnt even planning on going to garage sales yesterday). and that I possibly the one person in this closed minded podunk town that even knows who bukowski is, let alone adores his work, and have wished he could own a signed copy of any of his books. And just so happened to look in a milk crate under a table and scan through a few books to see this and know what it was. It wanted to be found, and somehow it was. It will sit in my book cabinet along with my collection of hanks books and my other favorites. It has a home and will be cherished!

The fact that there were multiple copies is a pretty sure indication that it came from someone involved in producing or distributing the book, and probably one of the authors or an editor. Based on that, it probably is an authentic signature.

I am listing one of these extra (unsigned) copies of Unpublished Poems on ebay tonight if anyone is interested. (It is scheduled to start later at 6 p.m. Pacific time).

The link will not work until the auction starts, Sorry.

And thank you all very much for your input on my signed copy!

frankenstein73 said:
I bought this at a garage sale in a milk crate full of poetry books dating from the late 60's to mid 70's as i was scanning through them i noticed it was signed Buk i scanned the names and sure enough charles bukowski has a poem in it. The guy i bought them from had no idea what they were and charged me $5 for the crate. Heres the scans, let me know what you think.
Click to expand...

I know the story of this book.

So the way Jess explained the signature to me, as best I can recall was: Grogg and I were at a reading with Buk and I said, "hey we're making a book for the advancement of poetry. Can we put yer poem in our book?" Bukowski responded, "Sure, good luck with your book." That was the permission that Bukowski gave for the poem to be published so Jess thought it was a good idea to write that down somewhere when he signed the book. Grogg is aka John Munson. I knew Jess for 30 years and heard many stories about the Venice West and Denver poetry scene. That book was a part of Jess' aka Donald's personal collection and may not be worth much money but it sure does have a ton of sentimental value to me.
You must log in or register to reply here.
Share:
Facebook Twitter Reddit Pinterest Tumblr WhatsApp Email Share Link
Top