What are you drinking? (1 Viewer)

yeah it really is...how arrogant it may sound, if you're used to drinking Belgian beer most foreign beers really don't taste that good. Very bad even. To be an alcoholic in Belgium is like being a kid in a candy store or a nerd on linux

btw Bruno, do you remember some of the stuff you drank?

well, sitting here on this hot saturday night in los angeles, the girl wanted bud light lime, I wanted this and I won, at least this time... nervas said:
...the girl wanted bud light lime, I wanted this and I won...
Click to expand...

Oh, when I saw the picture I thought you were going to say that you both lost. ;)

i truly believe i only took one thing from my dad, that one thing would be miller lite.

Last night at our friend's coming-home-party (which was a heartbreaking flop on account of people being assholes and not coming) it was me and Mr. G splitting a medium-sized bottle of Bailey's. Sweet stuff, better in coffee than straight up in the middle of the woods at what was supposed to be a barn-party. But, it was BYOB and Mr. G loves his Bailey's.

Marx Renoffski said:
yeah it really is...how arrogant it may sound, if you're used to drinking Belgian beer most foreign beers really don't taste that good. Very bad even. To be an alcoholic in Belgium is like being a kid in a candy store or a nerd on linux

btw Bruno, do you remember some of the stuff you drank?
Click to expand...

I had a few beers that I'd had before (Duvel, Westmalle and stuff like that) but I also got to sample a few I hadn't tried before - notably Brugge Blond and Orval. I had some others as well but I can't remember :D

After two years of boring soberness I finally felt like drinking a beer today and man, it sure feels good to be back home.

I'm on the second can of Becker's Pils now and I don't mind the aluminium taste it has. Someone has to cover up the Str8 Edge 4 Life tattoo on my back soon :rolleyes:.

By the way, the French don't charge bottles and cans so I can buy a lot of beer way cheaper than in enviromental crazy Germany and just throw everything in the trash when I'm drunk.

i had old monk rum and thumbs up on saturday.

Cowboy said:
It's in a one litre can.
Click to expand...

Cowboy said:
Danish beer called "Faxe" . It`s in a one litre can .
Click to expand...

Faxe is a great beer. I used to drink it pretty often back when I lived in Germany. A lot of bang for your buck.

well, the girl is gone, the kids(her kids) are gone and another 3 years are gone. So I sit with Monsters Of Folk on the stereo, the world series on the television and old faithful Jack. 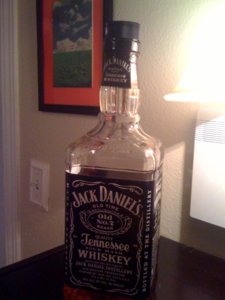 Mark73 said:
By the way, the French don't charge bottles and cans so I can buy a lot of beer way cheaper than in enviromental crazy Germany and just throw everything in the trash when I'm drunk.
Click to expand...

Why not go piss in your well while you're at it?

nervas said:
well, the girl is gone, the kids(her kids) are gone and another 3 years are gone.
Click to expand...

Founding member
5 degrees here tonight, -20 wind chill. You risk your goddamn life going out in this shit. I've got Baileys, Crown Royal, the strongest, hottest coffee that I can brew. (feels like a warm blanket) a fine partaga cigar (gift from my daughter) some decent herb and I'm staying home and celebrating with my cat. Happy New Year Y'all!

I have decided to drink myself to sleep this new years, not going out, just listening to records and smoking on the porch! BUT damn, I'm low on funds and had to betray my ole faithful Jacky... So this Early Times Whiskey? was only $19.99! I saved 20 bucks! Woo Hoo! Happy New Years to y'all! 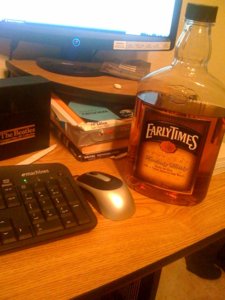 Threw an empty of Fireball Cinnamon Whiskey into the trash at Lougheed Station mid-shift. Three teenage girls pulling on it? Maybe. Late in the shift, about a half hour into 2010, some lightweight barfs in the back of the bus. 2010 starts out real fine.
P

I was at a second story apartment party last night, drinking Heineken from a tap and shots of Spiced Vodka someone made, and we noticed out the kitchen window next door in the backyard they had a party with a ice sculpture of a viking that people were doing shots from. They all were wearing viking hats and had a small ice luge, also.

We ended up being invited over and I had orange flavored vodka shots from the viking sculpture-you put your mouth on the vikings lips while someone poured the shots into his brain. This is New England so they had small fires going also.

Pretty good fun, and earlier driving over I saw someone get hit by the car in front of me. He was just lightly knocked down but that was strange, also.

nervas said:
I have decided to drink myself to sleep [...]
Click to expand...

So what was the pill?
S

strangegirl said:
So what was the pill?
Click to expand...

Oh it was just an ibuprofen, you know, so I wouldn't wake up with a headache.

La Fin du Monde, a Quebec version of the killer Belgians, quite good I might add.

I had to try this last night as i've always been curious as to just how bad it is. turns out the only bad thing about it is the alcohol content; 2% Still, at 88p for four cans i shouldn't really complain...

Not trying to sound like a hardened drinker or anything but is it even physically possible to get drunk on that shite? Reminds me of trying to get pissed from drinking Bass Shandy when I was little (0.5% abv if I remember correctly). 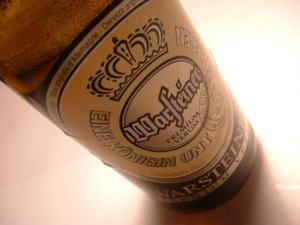 Since it was left on the counter I made a margarita. The mix is too sweet so I mixed 1/2 tequila and 1/2 margarita mix on the rocks. While the Cowboys pounded the Eagles in the wild card game.

The beer is actually called Warstoner ;)

...and be careful on the stairs.

Hey Mr. Love, stop this! We are not in a Kindergarten! If you carry on, I'll give you the clap again and you won't laugh anymore. Neither will Mrs Love. 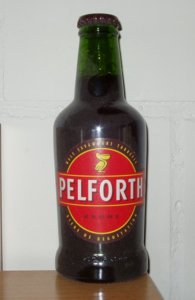 and the thing I expected the least was to feel dizzy :confused:.

I'm heading home for a tall White Russian a.k.a. Caucasian, before Mrs. Love finishes the Kahlua.

The little girl with the black eye is away or there wouldn't be vodka either.

So far tonight, I've had four Tennent's Special Ales (a Glasgow-brewed bitter), a Miller, a large Jura malt whisky and large Highland Park. I'm on Orkney Dark Island and half a bottle of Jim Beam now.

I'm stuck for what to have next, running out and the pubs here can't serve alcohol before half twelve on a Sunday. Anyone got suggestions?:)

Just remembered I have two of the 750ml bottles of Leffe chilling in the garden. I'm sorted til about nine am. =)

I was drinking a 1976 Armagnac at the weekend which a rather well-off friend bought me for Xmas. I almost felt guilty drinking it although that feeling soon wore off ;)

I'm cracking into the Leffe now. It's eleven minutes past three am. What's everyone else swallyin'?

P
does getting married curb your drinking habits?