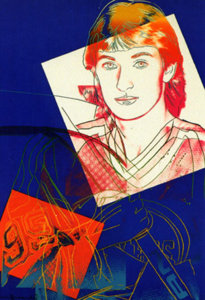 Yeah, it's the Whiner's 50th birthday. This bit of Warhol artwork is in the local university library.

Reaper Crew
Moderator
Founding member
who makes videos anymore? some people, I guess. I got a kick out of this one. sort of a cross between Jamiroquai's Virtual Insanity, the Replacements' Bastards of Young and Saw (or some other slasher film. pick one. go ahead, pick one. I'll wait. I'm patient and have a good book and almost a full bottle of wine. take your time, I'm not going anywhere).

I know, this traditional-stuff-claim doesn't sound sexy and I even don't know, what good she has done in entire.
But right now, I'm listening to a song named 'HJERTEBANK' over and over. (To me this song has the quality of the end-credits of a melancholic movie.)

I'll have a look for her in the near future and let you know.

Black Swan said:
Youn Sun Nah. I heard that, driving, on the radio. Love it!
Click to expand... the new Iron and Wine. it's growing on me.

but I'm just happy that mjp's younger brother is doing so well.

Founding member
I can't talk to that fucker. I won't go to any family get together if he's going to be there. I've asked him a hundred times to find his own shtick, but he's incorrigible. I had to start shaving just to differentiate myself.

Don't tell him though, or he'll start shaving, then I'll have to dye my hair pink or something.
S

Damn I love garage rock ditties from the 60s. The Fuzztones did a decent cover but nothing like the original.

That had the soothing effect of taking my mind off the fact I'm currently buried balls deep in snow.

Stavrogin said:
Damn I love garage rock ditties from the 60s. The Fuzztones did a decent cover but nothing like the original.
Click to expand...

speakin of the sixties across the street there was this...YouTube - Jody Miller - The Race Is On [Excellent(-) quality] (Scopitone)

Reaper Crew
Moderator
Founding member
not my favourite Cash song, but I really like his performance of it here. bashful swagger.

Funny, when they Runaways popped up like a zit in 1976 I just assumed that all the girls my age were learning how to play instruments just like me and all my friends and they would be in our bands, have their own bands, and just generally be part of rawk. That didn't exactly happen, did it.


Note: You are not allowed to mock or criticize this unless you had already recorded your second album when you were 17 or 18 years old (rather than holed up in your parents basement sucking on a bong with your dick in your hand, like you were).

Founding member
whatever you do is right Roky.

mjp said:
Note: You are not allowed to mock or criticize this unless you had already recorded your second album when you were 17 or 18 years old (rather than holed up in your parents basement sucking on a bong with your dick in your hand, like you were).
Click to expand...

No mocking, no criticizing. Yessir, nosir. Somewhere in my brain I think I wrote a review for the Waiting For the Night lp. But three seconds of looking only got me a handful of old punk flyers and letters from music editors for those years. Used to have four of their albums. Might still have the first gatefold one. They were supposed to play the Royal Hotel in New Westminster back around 1977. I drove to the club only to find out they had canceled.

Jammed out last summer when Joan played the PNE. Her Mom had died the night before but she did a show anyway. I didn't go. Dumb me.

I should have remembered to pull the blinds back in those Fort Langley days. Man, embarrassing!

These kids nailed the spirit of Malkmus..

Page Ten for this thread. where do we go from here....

I always thought the title of that song was Gah Nom Nom Hmmm mmm Ummhmm Mmph. Props for posting the tune.
S

Well, the Stripes broke up a few days ago. I knew all those other projects would possibly lead to screwing up the works. Sad news.

RIP
When I listen to the White Stripes I always think of Dead Moon. Can't help it.

Never saw Dead Moon live. Bet you your last bottle of wine the Stripes eclipsed whatever moon they had to offer.

Reaper Crew
Moderator
Founding member
this was just on the radio. great gosh almighty, I love this song.

it goes out to mjp. heh.

smooth as a babe's bum.
[This video is unavailable.]