OK, now that I have your attention. =P

Hi, my name is Lindsey, I'm a 21-year-old chemical engineer currently working/living in the US northeast and I'm happy to say that I'm a huge fan of Mr Charles Bukowski. It all started when I took in a little film called 'Factotum' and thus began my journey into the literary world of a man I can't help but now adore.

Thank you for having me. I hope I don't completely piss you off with my sometimes frank manner but instead charm you beyond words and make some friends among the Buk faithful.

There used to be a punk band here in L.A. called Free Beer. Looked great as an opening act on flyers.

Welcome and thank you for the very attractive thread name-Good Job On That. I don't drink and I had to check it out.

There are other chemists in here.

Confusing a Chemical Engineer and a Chemist is akin to confusing Buk and Allen Ginsberg. :rolleyes:

But welcome, Scout. Good to know of another Buk fan in the NE; we tend to be somewhat rarified birds.

chronic said:
There used to be a punk band here in L.A. called Free Beer. Looked great as an opening act on flyers.
Click to expand...


There was a metal band here back in the day when most nights I couldn't be pulled out of the Coconut Teazer on Sunset.... They were called "My Friends Band." I remember they were playing and there were fliers all over the pool tables. So I looked at one and thought, hahhahah, that's a good one. Maybe one day they'll be big and 20,000 people will say, yeah I'm going to the Forum tonight to see My Friends Band! Ha, still makes me laugh, but as far as I can remember they were a very watered down version of some crap like Whitesnake.

I was fishing with my dad one time on a chartered boat and they had Free Beer Tomorrow painted on one of the doors or windows. I was probably 8-9 and my dad had to explain, that it was a joke and tomorrow never really comes and I wanted to argue, BUT IT DOES, it comes tomorrow! My dad should have noticed I cared a bit too much about beer at 8 years old. Like father like son.

Welcome Scout, which books have you read?

Welcome, Scout! I don't drink, but I just had to see who would reply first to the title.

...so how do I get my free beer out of this computer?

Rekrab, I took this pic at the top of the Guinness factory a few years ago, this ones on me! 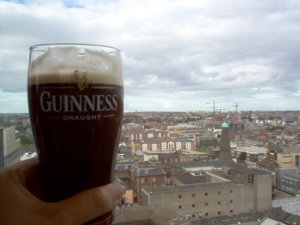 Thanks, nervas -- that really hit the spot.

Founding member
being a chemist you'd think you'd be able to whip up some kind of free beer concoction of some sort. i feel ripped off. but welcome anyway. :)

M
My beer drunk souls is sadder than all the dead christmas trees in the world.