Yes, and it's a great looking hard cover book too. Very nicely made.
Last edited by a moderator: Dec 2, 2013

Reaper Crew
Moderator
Founding member
I'm reading a book called Kalooki Nights by Howard Jacobson, and in it, the main character Max Glickman is a comic illustrator. about half way through the book, Max talks about a comic, Master Race by Bernie Krigstein. he describes it so well, I decided to go online and see if it was a real comic, or just invented for the novel. turns out it's real, and it's a humdinger. have a look for yourself (scroll down a bit).

keep in mind this comic was done in 1955. revolutionary, I would say.


I used to have a beat-up original EC copy of the issue of Impact that this was featured in. A very cool comic... sort of cinematic... and very unusual for it's day.

I would have said a late seventies or early eighties release. Wow, very much ahead of his time. 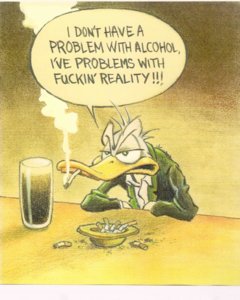 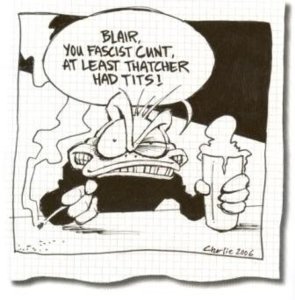 Funny, Bukfan! Thanks for posting those. Any others out there? Any collections of those strips we can hunt down?

There's eight albums so far, but I'm not sure they've been translated into English yet, although there are a few panels with English text like the ones I posted.
You could ask at Arne Duck,s Facebook page (called, Arne Anka). I'm sure you'll get an answer (At least there's be lots of strips there to look at). 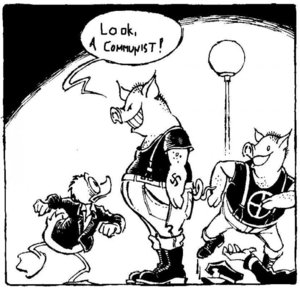 He looks a little like Howard, doncha think? Trapped in a world he never made.

Yes, he does, although Howard seems to look a bit more portly. He's often been compared to Howard and even to Bukowski, which is obvious, of course, since he has some of the same traits on top of being a poet too.
Last edited by a moderator: Dec 2, 2013
S

zenguru said:
He looks a little like Howard, doncha think? Trapped in a world he never made.
Click to expand...

He looks more like Donald, trapped in a world we unfortunately inhabit. Good stuff, Bukfan. Will look for more from Christensen.

Founding member
Anybody see the pilot of "The Walking Dead" TV-series last sunday?
Not bad, actually.

Didn't see it. I have the first two trades of Walking Dead. They are pretty good.

Founding member
I used to collect DC's House of Mystery...
I remember really getting into it, tearing out the back page
(then re-buying that comic to have that back page; should have known then that I would become a 'sick' collector :>)
to order back issues, etc.
Still look for missing issues in my collection of almost 250+ (I think)
of a 321 run.
Then Elvira came and tried to renew interest,
but only fucked it all up, especially with a different artist.

Anyone have some House of Mysteries?

zoom, have you been reading the current House of Mystery series? It's really good. And actually gets better with every issue. I think there are three trades out right now. With a fourth one forthcoming.

The only issue I have from the first series is #292. And I bought that because it's Marc Silvestri's very first published work.

Sophie Crumb is about to release a comic book edited by father Robert and mother Aline. Apparently, Sophie is also "Born into this". zenguru said:
zoom, have you been reading the current House of Mystery series? It's really good. And actually gets better with every issue.
Click to expand...


Nah, I don't really do comics so much any more, but thanks for the info.

I've been actually thinking about finding the remainders that I miss so I could have a full run to offer on e-bay, but then I found about the comic ratings, etc.
S

Erik said:
Anybody see the pilot of "The Walking Dead" TV-series last sunday?
Not bad, actually.
Click to expand...

Finally watched this and looks like one to stick around for. Two bitten off thumbs up! :D Had a minor issue with the beginning but perhaps too ticky-tacky to relate via post. Love the scene when the main character arrives in Atlanta and all seems relatively well and good until he turns that corner.

zoom man said:
Nah, I don't really do comics so much any more, but thanks for the info.

I've been actually thinking about finding the remainders that I miss so I could have a full run to offer on e-bay, but then I found about the comic ratings, etc.
Click to expand...


Like the full runs, do ya? Wish ya luck. Especially with those early issues. They can't be cheap. But even if you have the beginning of Joe Orlando's edited run and on, it should still fetch a collector's eye. Those were great issues. Nice early Wrightson work.

I have a full run of Warlord that I might think of selling sometime. Replete with annuals and the First Issue Special. Most of the run is signed by Mike Grell and a few other artists. Not quite ready to let it go, but I find myself thinking of the possibilities.

any hunter thompson/tom benton collectors out there?
2

Any Joyce Carol Oates fans\collectors out there?

Any Parisians out here? I think Buk would've loved this Devastatingly beautiful book

40% off any book at Borders