Bukowsky Written Up As A Woman (1 Viewer)

In 1983 Leo Mailman with Maelstrom Press, relocated to Cape Elizabeth, Maine, produced a chapbook. One part was written by me, Chuck Taylor, called "Drinking in a Dry County." The other part was written by California poet Steve Richman, now deceased, called "Charlene Rubinski by Gretchen Willis as told to Steve Richman." I think Steve had great fun turning the Buk into a female character. The two of them were close. Anyone interested should contact me as

Chuck Taylor said:
I think Steve had great fun turning the Buk into a female character.
Click to expand...

Buk had great fun with Steve too.
And he also liked Steve's output.
Last edited: Feb 2, 2018

something happened on my post about Bukowski turned into a woman and I did not give my address, [email protected]. Steve Richmond was famous for his gigago (sp?) poems, many of which he wrote on drugs, because of or nevertheless they are fine poems except for the overwhelming number of them. I wrote Steve and he sent me a short postcard saying my poems in the chap were "fine work." That was my only contact with him. 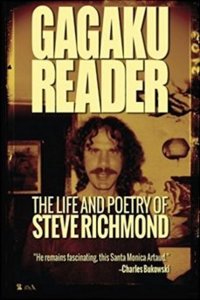 Sorry about the incorrect spelling. There used to be an article on the Web about Steve but last time I check it was gone. Great to know there's a collection.

Richmond, right. Spelled correctly on the 53 page chapbook. How is Leo Mailman doing? Never met any of these guys living poor in Texas. Founding member
chuck taylor...why do i feel like i've walked a mile in his shoes...?

Moderator
Founding member
Those are the two signs of a great writer: 1) named after a shoe, and 2) can't be bothered with trivialities like spelling, grammar, or making sense.