Most Hideous Day I've Had (1 Viewer)

Please tell us about a hideous day you've had. You know like trying to sell a piano and finding out you've been scammed or you come home to discover you wife left with everything. Something that pushed you to or over the edge.

What would Bukowski do? WWBD!


I'm not up to it today because I'm having a good day today. So let us hear some blues.

All we need now is a "Tell us about your boring bland day" thread. :D

No that would be boring. We need true drama you have lived through. Like a 300 lb. whore or you know...

All I can say is that, overall, I've had more hideous days than great days. Picking a worst day would be really hard since there are so many to choose from.
S

Well today I stapled gunned my penis to a tree but all n all I'd say it was average.

And by the way that was by accident not intent.

Hopefully, nothing happened to the stapler?

Three weeks ago I had a pretty bad day. I woke up and my nose began to bleed instantly. I got nosebleed two times the day before, but this time it was stronger and didn't stop. The towel, which I used, turned red within a few minutes, so I decided to call the ambulance. I spoke in a nasal voice and probably sounded weird on the phone ;)

They put me through the local ambulance, which meant that I got into a turning loop were a monotonous female voice informed me every four seconds about the fact that I will be put through. After the call was finished, I had to put on my clothes without messing them up, while bleeding heavily. I sat down on the ground, leaned against the wall and could hear the ambulance siren, thinking:"Why the fuck are they using the siren?"" The first-aid worker came in then, a young, fat, bald-headed man. The other one, the driver, looked more like a student of sociology to me, he wore glasses and had curly hair. They considered my nosebleed as remarkably strong. I went down the stairs and took place inside the ambulance car. They drove me to the ear, nose, and throat specialist, who obliterated two big blood vessels inside my nose. It smelt a bit burned and I noticed a little smoke arising. Before I was treated I had to wait some minutes for the local anaesthesia to take effect. A boy, about 9 years old, starred at my bloody face pretty stunned. "Mom! Did you see that man!? He's covered in blood!", I heart him say.

I lost about a litre of blood, I guess, and had symptoms of anaemia during the following days and drank lots of redwine, because it's known for beeing blood-forming ;)
Yesterday I got a bill over 640â‚¬ for a 10 minute ambulance transport :(

I've had my share of hideous days, I don't know which one to pick.
Let's say, yesterday I washed my neighbour's windows because she has a bad back.
This morning I got up to walk, and can hardly stand. My lower back is killing me. I can't do shit!
Although, not the most hideous...
S

Well, lo and behold, I stapled my penis to a tree again today, obviously the stapler is doing fine, but it was with two staples not three today so I guess things are looking up (insert smiley face here).

One of the most horrible days I've ever had was the first day I ever got my period. I put a tampon in and it was one of those cheap ones, and I accidently (it being my first and all) left the cardboard applicator on. Later that day, straining to walk and pull back our 100lb dog at the age of 10, I popped my own cherry with the cardboard applicator. It hurt like a mother. What hurt more was trying to take it out.

And then there was that day that I almost got scammed by a piano and got scolded by my very own Don Juan.
But at least I have a Don Juan.
And am a true vision of Nabakov.

Holy moly rock'n'rolly! Too much, Lolita, way too much. Have to start calling you Ms.Threadkill.

thank GOD we now can all just devote the rest of the posts in this thread to her until the moderators get so tired of it that they lock the thread and we can move on to another one where, oh i don't know, she talks about helping an 8 year old cancer patient shoot up heroin or how she OD'd after transporting cocaine suppositories across the mexico/new mexico border. SIGN ME UP.

Founding member
Do I detect a hint of sarcasm in your response? Surely you are riveted by the sexanddrugsandrawknroll stories of LT! If you are not, you simply have no heart. No heart at all.

As far as "The Most Hideous Day" story, I am going to keep it light and to-the-point.
Because to do otherwise is a bit too much like therapy or just public drama, for me personally. So.....

My most recent Hideous Day was finding gray hairs in my eyebrows. Not in the mirror, BUT IN PHOTOS !!

I have had a million hideous days, but the most recent was this... It's been 8 months since the love of my life walked out the door(Well, I also changed the locks so she couldn't get back in) but anyway... Two weeks ago, at 2am, I couldn't sleep, so I pulled my Sopranos entire series box set off the top of the book shelf and thought, hey, I feel like watching some Sopranos! It's a heavy box, opened it up to find that all 33 dvds were gone! All other contents were in the box, but all 33 dvds and 2 cds covering all the music on the series were missing! It's like she left timebombs! Every now and then I discover one! I mean, she actually took all the dvds out and gently put the boxset back on the shelf. I moved since then, and my friends all say, how the hell did you not notice this already? My reply is, I had not opened the damn thing since she left! I can go on and on about the things I realized she took, the day after she was gone, but it's the things like this that absolutely drive me crazy, nearly a year later! She knew exactly how much I worshiped Buk, and the value of some of the buk things I posses, why she did not take ONE single thing of Buk I have no idea, but am still thankful for. Anyway, 15 minutes after the Sopranos incident, I opened a limited edition 35mm Holga camera designed by Jack White. SHE FNG took the camera and fisheye lense and left everything else inside the box. What's worse, she placed electrical tape and batteries in the box to give it a semblence of weight!!!!!!!!

So anyway, that Sunday, two weeks ago was pretty hideous!

Today is a bad day.
My 20 yr old cat is laying here dying. Babette always thought that she was a big panther. She could scare the hell out of any cat, dog, even my 6+ foot tall cowboy friend.
Tonight she lays like a forgotten glove. Not a sound but the ventilators moving from left to right.
I am going to miss her a lot, I realizing that I am also looking at the last 20 yrs of my life.
She has been a great cat. 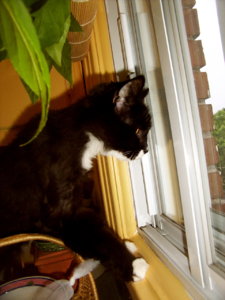 I know how that feels. My condolences for your loss. She looks like a big cat in that picture, do you know what kind she is?

So sorry to hear the news. It's a terrible loss after so many years. You summed it up perfectly when you said you were looking at the last 20 years of your life. Just try to remember that they've been good ones and you gave her a good home all those years. That's what has soothed my nerves since last December. We can't control their leaving us, but we can make their stay the very best possible. My condolences.

She looks big in the picture but she was never heavier than 9 pounds. She only thought that she was. A funny character.
My son always called her his little sister.
Thanks guys.
S

number6horse said:
We can't control their leaving us, but we can make their stay the very best possible.
Click to expand...

RIP
Today is a bad day, yes. And yesterday too.
I met Babette in person. I called her sweet bitch.

Today I saw her laying on bed through a computer screen.
Wish I was there.

My sincere condolences, Black Swan! Loosing a pet is (almost) like loosing a family member. I know, I've been there. At least you've had 20 good years together and lots of fond memories, not that it helps much in the present situation, but hopefully it will in the future. May she pass quickly without too much pain.
Last edited by a moderator: Dec 2, 2013

Thank you all, for the kind words.
Babette is no longer suffering.
Ponder played this song for us.
S

Sorry for your loss Black Swan, it's hard to loose a pet.

Pets are better than people since they love us so unconditionally. I would say they never complain except my son's little cat has some sass in her meow if she's not getting her way.
I went from no cats at home to two and they remind me of why cats are awesome.

The spirit of Babette will forever be rubbing against your soul with affection.

I'm sorry to hear that, Black Swan. It's always tough to lose a friend.

Sorry that I took such a big chunk of this thread, and thank you for the support.
Let's move on... 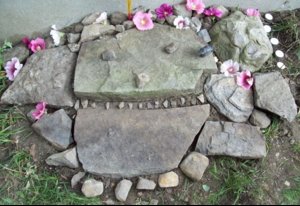 Maybe from some place she sees it and smiles.
Or she would if cats could smile.
Maybe she's a Cheshire Cat now and actually can smile.

Thanks Roni,
She is laying wrapped in a purple boa! Along with buddhist beads and her catnip toys.:(

A very beautiful grave indeed! I'm sure Bukowski the cat lover will smile and nod in approval if he sees the grave from his spot in heaven.
Last edited by a moderator: Dec 2, 2013

Wow Black Swan, so sorry to hear that, and wow again, what a beautiful thing you did for her after she passed.

In my day we had to run barefoot!

This Lady Had Balls