My novel BASEMENT is out on Amazon (1 Viewer)

I made the plunge and published a novel of mine - BASEMENT - as an e-book:

The Jones’ have a prisoner in their basement.
So do the Smiths.
Times are tough. When a working class town in the northeast gets their fill of foreclosures and seizures, they turn to an experimental program that promises to put cash in their pockets: Housing non-violent offenders in portable jail cells in citizens’ basements.
Sounds like a great idea.
Sex is rampant. Racism is off the charts. Every misstep is compounded by sociopathic Mayor Bob, who makes sure every family gets the prisoner that can do the most damage to the family bosom.
On the outskirts is Coleman, a lonely man who is fuming because his house is a summer bungalow without a basement. It’s an election year and Coleman goes up against Mayor Bob, against an imprisoned background of lust, alky blues, imminent suicide and degenerate optimism.
Let the games begin.

A reader said BASEMENT unspools like, “… a combination of Elmore Leonard and The Simpsons.’

It's available on Amazon. I'd love to get some feedback from the forum and hopefully some reviews on Amazon. Amazon has some some sample chapters up on their site so you can get a preview before you spend any cash. BASEMENT goes for $3.99 but if you're strapped I can provide free downloads. Just send me a message and I'll send you a link. You'll need an e-reader (Kindle, Nook, etc.) 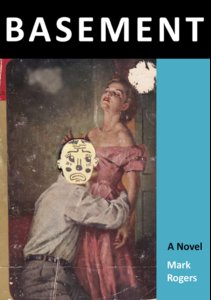 I was totally prepared for your 'concept schpiel' to have me roll my eyes. But actually it had me laughing. Great timing for your post, too, after we just got done navigating the carnage of the valdez oil spill, just about anything will look good :rolleyes: (kidding, valdez, kidding). I don't have an e-reader, though, so I guess I'll wait for the bootlegs to circulate.

Glad I made you laugh. I didn't have an e-reader myself until I needed one to edit this book. Things are changing fast. Writers have more power than ever in getting published - the big challenge is getting noticed. One cool thing about the e-reader is the novella is coming back. There's less emphasis on plumping up a book to a marketable thickness.

growing beard said:
I don't have an e-reader, though, so I guess I'll wait for the bootlegs to circulate.
Click to expand...

Kindle for PC is still available for now (gratis)...

Marketable thickness. Sounds like the beginning of a "Fogel Founder". Deeelightful!

Reference is to Al Fogel. Former Bukowski penpal and checklist/price guide creator. He is also the leading exemplar of the "Found School" of poetry in which he invests lascivious meaning to already printed material of a prosaic and non-literary origin. He has recently been on the forum pretending to be other than himself to shill his short story. No disrespect intended to your work.

Interesting concept. I will read some of it later.

Worth checking out from the above. Love the cover.

Like I mentioned before, hit me up for a free file to download if you find it interesting and want to save $3.99.

I'm back from Bruce Bickfords basement