Dear Buk Fans,
I'm back on another Bukowski binge. I've been buying and reading some more of his books that I have put off on purpose. When I was online about 3 weeks ago I discovered this website so I am a serious beginner in the eyes of you long time legends. I bow before respectfully. I have always been stunned to hear that the Barfly stuff was based on his time in Philly. I absolutely love that fact. I have always wondered where that stuff took place in the old days. When I saw on this website that someone somehow found out the specific locations I was speechless. Within a week or so I drove down to Philly and scoped out the places. I took pictures of everything. I am so new to this site that I am unaware if this is old news and pictures of his old haunts is already well known. I hope these pictures are new to people and people enjoy them as much as did finding the places. We all know that Hank used to talk about fighting in the alley behind the bar he used to work at in Philly. Well as far as I know nobody knows the actual address of the bar where he hung out in those days. One of the places he worked was 1601 Fairmont Ave. Well when I was there, there was a restaurant right across the street from 1601. There was an Asian guy working on re-opening the place. Most places that are zoned as restaurants and bars have a tendency to stay that way. Well right behind this restaurant place there was an alley that ran a whole block. I took pictures of that alley way. It was behind locked black metal gates. Could you imagine if that was the alleyway where Buk had his legendary fights with Tommy McGillagan?

I took pictures of the following address's 1623 Green St., 603 N 17th St., 2020 Mt Vernon St.. I took pictures on his work place at 1601 Fairmont and it was a few blocks to the Nabisco plant but there was no building there anymore. I didn't drive to 4th and Broadway. I ran out of time. All of the places he lived were very close to each other and very close to the 1601 16th and Fairmont work address. They were within a few blocks.

Now I have to figure out how to post these pictures to the site. I am not very good when it comes to computers. I love the movie the Barfly. I am pround that Buk had some of his finest fighting days on the mean streets of Philadelphia; the city of brotherly blood.

I'm anxious to see these, but the images aren't working.

I am really dumb when it comes to computers. It's really embarrising. I have sent an email to mjp to help me out. If I only had a brain. As soon as I learn how to get it together I'll get the photos up there. I apologize.

Typical Philly crap... That's why I throw all Philly mail into the river and watch it drown....

Danny Mac said:
I have sent an email to mjp to help me out.
Click to expand...

Anyway, you are linking to images in some location where they don't exist.

It's way easier to hit that "Upload a File" button, right there next to "Post Reply." Upload them here and one of us will move them to the first post in the thread.


Danny Mac said:
it was a few blocks to the Nabisco plant but there was no building there anymore.
Click to expand...

You can see what used to be there.

I'm looking forward to seeing these pics. I lived in a pretty rough section of Philly about 30 years ago (briefly) and I love reading Buk's accounts about his time there; it rings true to me when I remember the way people there spoke and acted.
It is one fighting city for damn sure. I had a 40 oz. bottle of Budweiser cracked across my face one day, unexpectedly, for no good reason, and with the nonchalance of a handshake.

Otto jr said:
I'[...] I love reading Buk's accounts about his time there; it rings true to me when I remember the way people there spoke and acted. ...] .
Click to expand...

Then, New York was so bad I thought: "I want to go to a nice, shady, quiet city. Everything is calm, the people are decent, there's no trouble. Philadelphia, what do they call it? The City of Brotherly Love. I'll just go there where people are dumb. They don't fuck with anybody." I went there, it was tougher than New York. They killed on the streets, they bribed the cops.

So true Roni. I'm a native NY'er and still live there today; I have always said that Philly is NY minus the glitz and glamour; twice as mean and twice as vicious. But I do love it there in Philly, have many good friends, family, and fond memories down there on the other end of the Jersey Turnpike. God or somebody bless them.

I finally figured out how to get these pictures downloaded. The website stopped me at ten but I have a few more to go so I'm going to do a second posting. I wish there was a way whereby I could label the pictures so people would know what they're looking at. Some of the addresses are seeable so they are self explainitory. mjp, the man who almost controls the whole internet said he will post these pictures to my oringinal thread. Hopefully he'll be able to get all the photos in there. Maybe one day someone can post to the site a Google map for the Philly addresses like someone did for all of the L.A. addresses. 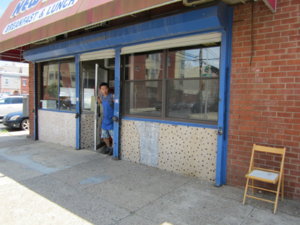 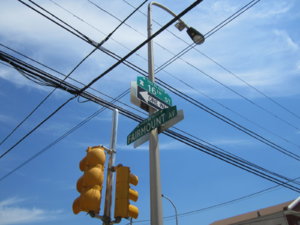 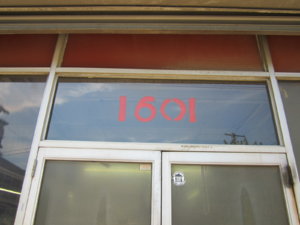 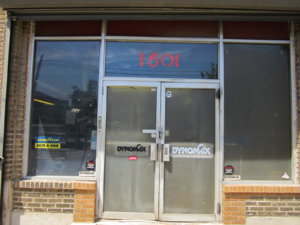 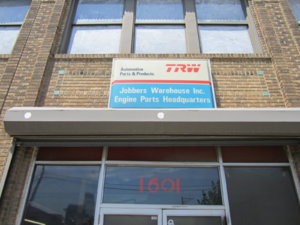 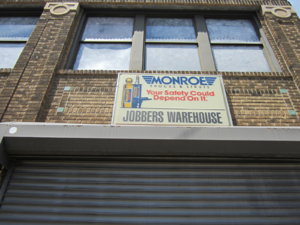 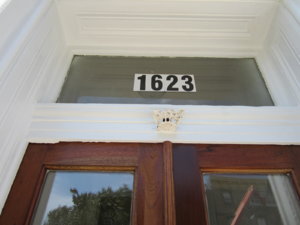 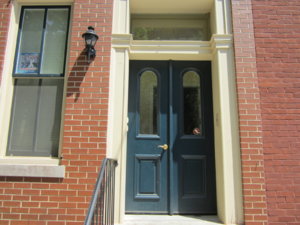 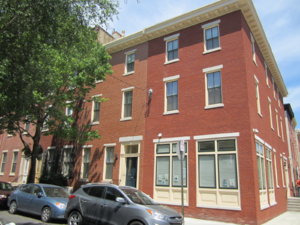 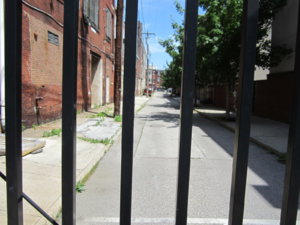 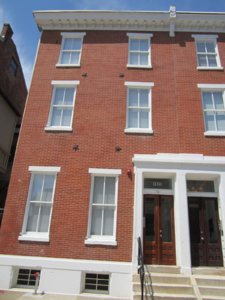 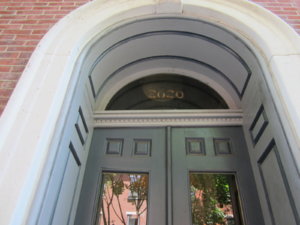 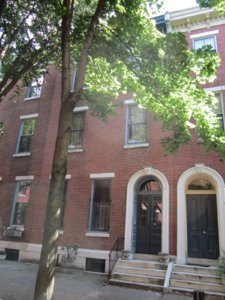 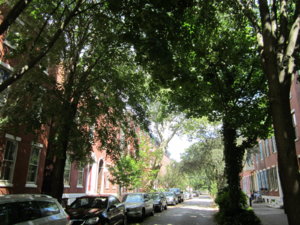 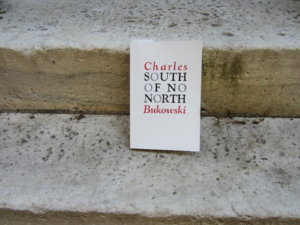 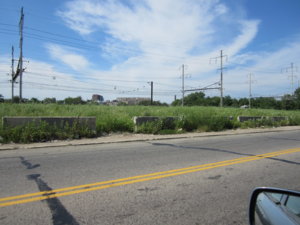 I'll explain what these photos are. 19 is 1623 Greent St. 23, 28, 26, 27 are all 2020 Mount Vernon St. It was a really nice street with healthy trees. I am just now reading So. of No North (part of my program of purposely saving Buk books to read throughout time). I put it on the steps of 2020 Mount Vernon St. Whoever lives there loves to read! All of their visible window sills were covered with books. I knocked on their door 3 times but no one answered. I really wanted to tell them that at one point in time Charles Bukowski lived there, and slept there, and drank there. I don't think he was writting in those days. He was busy drinking, fighting, and waiting. Number 30 is 1325 West Glenwood Ave. where he worked at the Nabisco plant. It's not there anymore. It's just a green empty fieild. In that field, "the grasses held long and green their secrets." Thats from "the death of a roach."

Thanks for these. This was a lot of effort. Next drink I have goes to you (well me, but I will tip the glass to you)

Pogue Mahone said:
Typical Philly crap... That's why I throw all Philly mail into the river and watch it drown....
Click to expand...

There's no need to be a absolute douche bag here. We get a fair amount of junk that we need to wade through, but a member with some good info who needs help posting it isn't where we normally trash the entire world. So, knock yourself out, as it were, but sometimes we allow a bit of latitude when the poster is genuinely trying to contribute. For the record, I've been a douche bag here more than once, so I know of what I speak.

Really cool. Thanks for the photos.

Been to those locations as well. I work near there and have seen 2020 Mt Vernon w/ the books in the window. I know of what you speak. Dig the photos.

Thanks for the compliments and insults. Buk wouldn't have it any other way. One should know that this is the first time I've ever posted anything to any website. I am a serious neophyte. It took something that I love tremendously like Bukowski for me to do this project.

Hey Philly Dave, that boggles my mind that you have seen the books on the window sills of 2020. I didn't think anbody would ever see that. That is very cool.

As far as my comments about mjp controlling the internet, that was a line that I grabbed from some of his own writing. I don't mean that as an insult, I mean that as a complement. From what I've seen in a brief time, he is all over the place.

Danny Mac said:
Hey Philly Dave, that boggles my mind that you have seen the books on the window sills of 2020. I didn't think anbody would ever see that. That is very cool.
Click to expand...

Yeah, I almost knocked. Bookhaven on 2202 Fairmount has every now and again a beat up copy of one or another of Buk's work. Great store. If i think of it I may get a cheapo Buk book and leave one @ 2020 too.

Folks,
I just called the fine gentlemen at Jobbers Warehouse in Philly, specifically the location where Buk worked so long ago at the corner of 16th and Fairmont. I wanted to find out their hours so I could go inside and take some video of the place that Buk once worked. The guy who answered the phone who was the owner, operator, treated me like I worked for the FBI or maybe the CIA. It was so ridiculous.

Do you believe this? I tried to explain why I was calling. I managed to explain to him about Bukowski. He kept interrupting me. I made the mistake of telling him I was going to get a minute of video of the place that Buk once worked. That is when he was pretty much concluding I worked for the NSA or the Illuminati, or the Super Secret Government. It was so ridiculous.

The guy had the people skills of a Cactus. So my plan to get some video of the inside of the auto-parts store that Buk worked at isn't going to happen. I was trying to get into the 1601 location.

Founding member
Well it has been 70 years, so they may have, you know, rearranged the furniture. Not sure what the allure of seeing it now would be.

Next time you try something like this please, please record the call. It would be priceless.:DD

you're right...that call would have been priceless.

When I went to New Orleans about 3-4 years ago (it was likely longer), I was intent on finding the old haunts of Loujon Press. I found one or two house numbers and a whole boatload of nothing. From your pictures of Philly, it looks as if, like many cities, regentrification is the word of the day. I'm not saying Mr. Autoparts Warehouse should have been more or less cooperative, but just observing that in today's world, big U.S. cities ain't what they were 30 years ago, let alone 70 years ago. And owners of autopart warehouses aren't likely to be voracious readers of Bukowski. Deference to any autopart warehouse owners who are, of course.
C

Did Bukowski ever live at 3545 North Camac Street? See http://cyberplaque.com/bukowski-cha...o-longer-there/did-charles-bukowski-live-here .

Founding member
Not that we know of. It's pretty far from the area where we know he lived (at three different addresses).

The odds that he would have left the equivalent of $135 in a bank account are slim, but who knows. Good newspaper sleuthing.

E
Interested in mentions of Buk in others' work?
2