HERE's some latest info on Pamela 'cupcakes' / 'scarlet' / 'Tammie' Miller's book about her relationship with Hank. 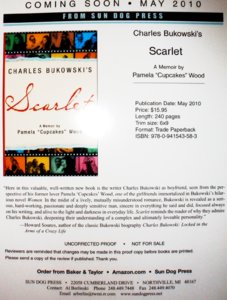 (The upcoming yearbook of the Buk-Society will include the first 3 chapters of this book in a slightly earlier state of the manuscript.)
S

Founding member
Finally. I think everyone is going to enjoy this one.

Founding member
Good times are comin', but they sure are comin' slow :D

I just spoke with Al Berlinski (like I'm some kind of a big time insider) and he had a lot of great things to say about the book and Pamela Wood. The book hasn't been printed yet but any day now they'll start. I know from reading all of the posts about Cupcakes and your reactions that I very much look forward to reading this book. Al is a very nice guy and I was surprised he was so receptive to my call. There are still plenty of nice people in the world besides the mean.
(spoke highly of roni as well)

Great news! It's gonna be an interesting read for sure.
Last edited by a moderator: Dec 2, 2013

Brilliant. Can't wait to read it!

Founding member
Yeah, this is going to be good.

I wonder how they're gonna dismiss his work now that he'll be revealed as something more than just a drunken letch...

Can't wait to read this.

Founding member
Well, I've had a chance to read this, and it's very well done!

But just 'well done' wouldn't really be a recommendation, would it. This is really a look into the fucked up, insecure, needy side of Bukowski that has been touched on, hinted at, danced around, but never really fully put out there for us to see.

There are only two other people who could have written this, and they are both named Linda. One of them will never write anything like this, and one of them may have, but we may never know. I have only read bits of L. King's book, and those bits didn't feel as intimate as Pam's book does.

For that reason alone, I would rank it among the very best of the books about Bukowski. It's an essential piece of the puzzle, for sure.

Here's a little something that surprised me and may help put one of the questions asked about him in other threads to rest:


He then asked if I would mind turning on the television. He said the Los Angeles Rams were in the playoffs and he wanted to see the game.​
While Bukowski preferred boxing and the horses, he did enjoy watching football and baseball games when they were televised. I, on the other hand, had no interest in either, but happily complied and turned on the game.​
After about and hour of pretending to care about the game, I began to get restless. Bukowski was engrossed in the game. He was getting very excited. The Rams were playing the Dallas Cowboys for a spot in the Super Bowl.​
"NOT ANOTHER BLOCKED PUNT! JEZUS! YOU PUSSIES!" he yelled at the television.
​
I'd never seen him this worked up over a sporting event, even at the racetrack.​
I guess my timing was bad, but I was getting bored and thought it was time for a little musical entertainment. I began to sing the "Mr. Touchdown" song.

You gotta be a football hero
To get along with the beautiful girls...​
I sang to him while playfully mussing up his hair. He turned and gave me the most mysterious stare, as though he was studying my face for suspicious looking moles.​
Then he said in a very serious tone, "Nothing is sacred to you, is it Red? You don't take anything seriously, do you?"​
---

Okay, maybe not the most telling excerpt, but I don't want to ruin anything for you.

The idea of Bukowski yelling at the TV during a football game would have never occurred to me. It doesn't exactly meet up with his persona on so many levels...
S

If this scene is indicative of the book as a whole, I'll suffer many a paper cut tearing through it. Really like the narrative voice here.

Founding member
Just spoke to Pam and the printer is delivering the finished books to Sun Dog today, so they are on target for the May 1 publication date (if not sooner).

I also hear that there could very possibly be a very limited special edition hardcover available, but no details on that yet...nothing on the web site...

I would be very surprised if the hardcover edition is not already oversold. Anyone interested should run, don't walk, and e-mail Al Berlinski at Sun Dog.

Founding member
Yeah, unfortunately I just received an email from Mr. Berlinski saying that the hardcover is oversubscribed, so he isn't going to put it on the site.

But he mentioned a limitation of 50 numbered/signed paperbacks...not sure if I'm supposed to say that here, but...

I just emailed him, but is there any way to get the book from Sun Dog Press other than printing and then sending in the order form, and I really don't want to buy it from Amazon. Thanks.

The ISBN list indicates the 26 lettered and signed hardcovers (bound by our own Bill Roberts) that we talked about being sold already, but also the 50 paperbacks numbered and signed. So that's for sure.

Get on board for those paperbacks! This is a good looking - and great reading - slab 'o dead trees, my friends. Guaranteed delicious.

Very cool. I'm waiting to see if I made it on the list for the HC... if not, I'd be glad to pick up a paperback signed or otherwise...

I received a massive box o' books today. I need to get binding.

Also, people have asked. i forwarded all the names and addresses of everyone that e-mailed me with interest in the hardback to Al Berlinski. I am not sure who he contacted, but they were all sent in one massive e-mail. Please remember, I am the binder of the hardback edition, not the publisher.

No contact here (that I can remember, anyway).
S

Dead chance I'll get one of the limited books but am pleased as Pantagruel to hear they are starting to arrive.

bospress.net said:
...I am not sure who he contacted, but they were all sent in one massive e-mail.
Click to expand...

No email here either. Bah. When did he send them out?

Hm, ah well, I'll be glad to have a nice paperback too. Probably couldn't afford a HB anyway (but I would swing it if it were possible).

hank solo said:
No email here either. Bah. When did he send them out?
Click to expand...

Founding member
He may have pre-sold all those to old customers or people already on his list. If the response to the book is positive maybe he'll consider more hardcovers. A "trade" edition. I suppose it depends on whether there is any financial motivation, as the kids say.

Special editions aside, I think everyone will dig the book. It's fresh stuff, and fresh stuff is becoming harder to come by.
S

Halfway through the book and truly wish I had a mastery of the blurb - Awesome fuckin' shit!! just doesn't seem to have The New York Review of Books kind of sensibility - but well, this is some awesome fuckin' shit.

yeah, I am into it. The book is a great read.

Nearly done with mine. Love it! I ordered from amazon and though amazon still says 1-3 weeks shipping, mine shipped in 2 days!

Got an e-mail about the HC and sadly had to pass because the money all dried up. Ah well...

What was the price?

I got an email too. The price was $65 including shipping within the US. And $35 for a signed paperback.

Yeah I'm thinking of trying to swing a signed paper a couple weeks from now... $65 was a good price, just a bit out of my range... Damn it...

There will be the regular trade edition of this available at bukowski-shop.de and also 7 copies of the signed trade paper editon.

The deal with SunDog-Press is already done, the order already placed, so it's a question of not much time left, till they arrive.


(and then I will also have the other Bukowski-titles from SunDog, except the one, you know ...)

I got the email, but had to pass because Al doesn't take Paypal and that's where I had the dough for it stashed. Plan B is to find a copy on eBay I can use Paypal on. No doubt it won't be a hardcover, or if it is, it'll be more than the issue price, so I'll wait for a softcover.

OK. Because I like you and let's face it, after the 10 days without you, I realized that I NEED you....

I talked to Al. Anyone that needs to pay with paypal can send it to me at [email protected]. I'll take the money out of the money that he'll owe me for binding the hardbacks. If there is an overpayment, I'll cut him a check.

This should make it easier for those outside the US and those who have balances on their Paypal and want to pay with that method.

p.p.s. The hardbacks should be ready in a week or two....

...and I finished reading it today. Really a great book, whether you get the hardback or paper, it is a great read. It really shows a different side of Bukowski. Very touching.