roni said:
the day after, I phoned a bar, where they had regular cultural events (concerts, plays, readings, parties, etc.) and asked if they'd be interested in a 'Bukowski-Night' as a tribute. They sure were.

So I was organizing an evening there, showing 'Barfly' and a rare German docu. The place was packed! All chairs occupied, people standing side by side on the walls.

I decided to organize a 'Buk-Night' every two years then.[...]
Click to expand...

That was a nice initiative, Roni. But you were wearing the wrong fuck off t-shirt.

Billions served
LOL! me neither. Right on, Johannes.

Moderator
Over 1000 posts
Twenty years ago I saw this article in "Politika" (The Politics), the leading Serbian newspaper: 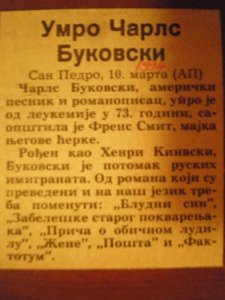 France (?) Smith, a mother of his daughter, announced that Charles Bukowski, an American poet and novelist, died of leukemia at 73.

Born as Henry Chinaski (sic!), Bukowski descended from Russian immigrants (!). It's worth noting his novels, translated also in our language:
"The Prodigal Son" (Ham on Rye), Notes of a Dirty Old Man (!), Tales of Ordinary Madness (!), Women, Post Office and Factotum.

Over 1000 posts
A day late, working with a back up laptop as the primary one is sick (but has all this data).

John Bennett said:
... wherever it is in the house of the Lord that the spirit of children emanates from, Bukowski should be walking up to the door by now, home again after a long and weary exile.
Click to expand...

about the poems... John Bennett says:
"they electrified me, they set me dancing about my garret room so that my four-year-old son broke into laughter and began dancing with me, they clarified and verified what remained of my childhood perceptions that I was desperately and intuitively trying to hang on to (the good, the pure, the accurate and preconception-free small child perceptions that get pounded out of existence in most of us at an early age)."

reading this was so good that now I am running out of this room to paint like a fool. :agb:

Over 100 posts
I got monumentally drunk.

Over 100 posts
My best friend at the time called me and told me over the phone. I was surprised at how serious he was as if he wanted to take it easy on me. It was night time. I was stunned and I didn't know how to react. We talked about Buk for a while and then hung up. It wasn't until later that it started to creep up on me and then I started to realize what a total tragedy it was. That weekend I got good and drunk while re-reading the few books I had. It was then that I went on a multi year reading binge on Buk and developed a deep love for him.

Today, I feel like it's right to bring this up again.

I was in my first Buk reading/collecting phase and wasn't shocked because I knew he had been ill, but was really saddened. I went to see Red a couple days later and shot the shit for awhile. I was 28, and Bukowski is someone I actually still think about daily, 23 years later. I think I bought a couple of L.A. Times for his obit.

damn... what a fine tribute

Billions served
I was so sure, we did have a thread re Hank's Day of Death, but couldn't find it via search-engine. So, I'm creating one, since today's the day again.

Though I seem to remember, I've posted these 4 Original Historic news from March 10, 1994 on German TV before, it may be appropriate to have them (again?) starting this thread:

zobraks said:
Thanks for the link.
Click to expand...

Ah Dammit! It's up there already. My non-capability to remember things.

Anyway, what's not up there is me visiting the grave in 2007: Moderator
Over 1000 posts
I expected you to prostrate your naked tattooed body over the grave (as pilgrims do), like this: Btw, I saw that picture of you by the grave before.