Founding member
"You better really study it and read up on it, otherwise you're just going to sound ignorant..." Founding member
Alex: How about Bukowski? Do you think he did that?​
Crumb: Uh-uh. No. Bukowski appealed to a certain kind of woman. Some type of crazy women. But, I don't think he set out to be seductive to women. Not at all. He was as surprised as anybody that his writing started to get him laid by attractive women after he began to acquire some fame.​

I don't know about that.

I think just about every letter Bukowski wrote to a woman was meant to be seductive. That's just the feeling I get from reading his letters to women vs. those to men. I've commented on it before around here somewhere. Maybe that's just me reading something into them, but I think the difference is quite noticeable.

I don't think Crumb ever read Bukowski's letters to women or even knew him that well. I think Crumb sees Bukowski like he sees himself, as a guy who did'nt have much luck with women till he became famous, but without knowing much about Bukowski's actual life.

Moderator
These serigraph prints are now for sale at RCrumb.com: 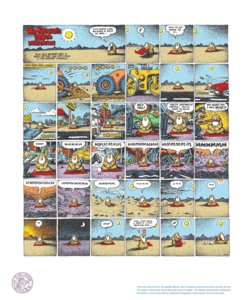 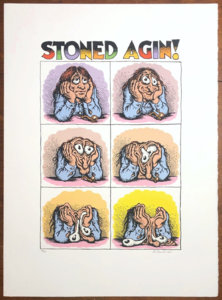 Founding member
that "stoned again" original art just sold for $690,000! - i remember seeing a poster of it at the CNE in the 70's and being
freaked out by it.

Wow!
I wonder how much of that cash went to Crumb.

Founding member
zero if he didn't own it. which i'm pretty sure he didn't.

New Crumb interview. Notice the photos of the Trump doll full of needles hanging outside Crumb´s house in France. ?

Moderator
Now this is odd.
I wanted to see what that village Crumb lives in looks like, so I fired up Google Maps' Street View and look who I found
(in the very first street I visited there!): It couldn't be Crumb (I reckon he would have jumped in the river to avoid being photographed), but this guy is skinny, wears a large shirt, old pants, sandals with socks on, not to mention the trademark hat...
Perhaps he influenced the villagers so they all some of them dress like him?

P.S. In the Haaretz interview I read this:

Sophie has acquired a reputation as an artist in her own right but at the moment she has set her art aside and is devoting herself to parenthood in a nearby village.
Click to expand...

Now I'm pretty sure that's Robert, Aline and Sophie with her children in those Street View pictures.

Now this is odd.
I wanted to see what that village Crumb lives in looks like, so I fired up Google Maps' Street View and look who I found
(in the very first street I visited there!):
Click to expand...

That´s odd alright! Maybe you can find his house and street name with Google street view. All you have to look for is Aline´s large TRump doll hanging outside their house. ?

Thanks for posting the cool Crumb interview. I recently finished writing my book R. Crumb: Literature, Autobiography and the Quest for Self, due out in February 2021 from U. Press of Mississippi for any of you Crumb fans. I have a chapter discussing Crumb's Bukowski drawings. Here is the cover.