Founding member
I think it'd be useful for us B nuts & freaks to list here all the primary projects B began and never finished or those poems and stories we know he subtmitted to a given mag but nobody has a copy of.

But tracking that down is impossible. So let's list the lost and unfinished projects which we know for sure.

LOST:
-The infamous Write mag. A short story and a couple of poems.

I'm sure there are more unfinished projects and lost stuff. Come on, we need your input.
Last edited by a moderator: Dec 2, 2013

cirerita said:
-The Poet: Not sure whether this one is finished or unfinished. I could read a few pages while I was at the USC. It was sure a thick novel.
Click to expand...

Why could you only read a few pages? Your time constraint, or they didn't let you have the whole thing?

Founding member
I was there for a few days only and didn't have time to read AND copy everything, so I had to make choices. One of the choices was not to read all the novel.

Founding member
Hmm, I drive right past USC every day...

Founding member
How thick were the other novels? Were they just false starts on his present work? And do you have any idea as to whether they are fiction or more autobiography?

Founding member
Hmm, I just read in a 1982 unpublished letter that B was "starting a novel called STREETWALKER". does it ring a bell to anyone?

Founding member
Never heard of that one.

yup,he mentions it in screams from the balcony,he stoped it because he was in fear of repeating too much of the stuff he already published about that time.

it was a novel about his time with jane.

Founding member
fuck, I'm getting old, I shoulda remembered that!

Founding member
whoa. somebody should go to USC and copy the whole fucking novel. would they let you do that?

Founding member
probably not, unless... oh, you know the drift ;)

Just to feel good, contributing something: 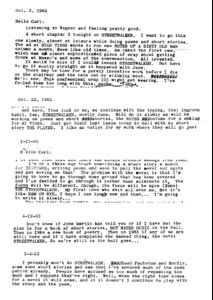 " There may be time for a purely inventive work before I die on the stairway and the cats eat my stinking meat."

Made my day. Thanks, roni.

" There may be time for a purely inventive work before I die on the stairway and the cats eat my stinking meat. We'll see. This confessional crap might get wearing."
Click to expand...

That's a very interesting comment. He did end up getting that purely inventive work (Pulp) written just before he died, but apparently he had the idea for something along those lines as early as 1982.

blue beads and bones OR Only The Truly Lost