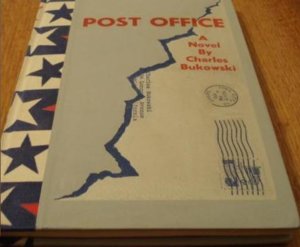 Printed, January 1971 in Santa Barbara by Noel Young for the Black Sparrow Press. Design by Barbara Martin. This edition is limited to 2000 copies in paper wrapper; 250 hardcover copies numbered and signed by the author; and 50 numbered copies handbound in boards by Earle Gray, signed and with a original illustration by the author

That picture attached was borrowed from Abe, listed as #37 of 250 by James Cahill of Aliso Viejo, CA.

Maybe a photo of the signed colophon would help.

Hi,
Not accusing anyone of anything, but there are a couple troubling things about this posting. As Hank Solo mentioned, this is a "borrowed" image. Anyone selling a $2000 book would not "borrow" an image from another person's listing. Cahill is a very well known seller, so I suspect that the book photo that is listed on abe is his. Also, the fact that the seller has a Hotmail account is a bit troubling. Hotmail does not do much in the way of verifying identity. You really have no way to know who this really is.

Given all of this, I would not buy the book unless 1) They took credit cards and 2) could send other pictures that were not lifted from the internet and 3) were willing to provide a telephone number that would resolve to an actual address. Still, I would be very, very cautious.

Then again, they have a website set up as a consignment service, so maybe they are just lazy and did not want to photograph a $2000 book that they were trying to sell? Of course, there is only one reference to this consignment shop when you search Google, so it could have been set up today as a part of the scheme.

Again, this person could be completely on the up-and-up. The problem is that they have presented themselves as someone would if they were running a con.

That picture attached was borrowed from Abe, listed as #37 of 250 by James Cahill of Aliso Viejo, CA.

Maybe a photo of the signed colophon would help.
Click to expand...

RIP
You must be a fool to think you're able tricking the Buk-experts.
Good work guys!

Jus before I saw this thread, I re read the Al Fogel story in Drinking with...Nice coincidence, I guess his book is already discussed here?

Reaper Crew
Moderator
Founding member
Its also on ebay, along with a copy of Pulp...

But I'd still be nervous even with the Paypal option.

RIP
He didn't even introduce himself...