Scott Harrison has spoken! The world at large stifles a yawn. (1 Viewer)


It's true that over the years John trimmed passages, took out some words, changed a few things around as editors do and there are some with time on their hands to sit back and criticize him...​
Which is cute, coming from an idiot. Since only an idiot would dismiss the wholesale rape of Bukowski's posthumous work as no more than something "editors do." John Martin wasn't an editor, he was an extremely lucky paperclip salesman. And later, a cowardly butcher.

It's incredible to me that someone who has had as much of Bukowski's work pass through his hands as Scott Harrison has can be so ignorant and clueless. Being a Martin apologist is one thing, they are everywhere, but being willfully blind and stupid is something else, and there is no excuse for it.

When all is said and done we'll see who was "sitting back" and who was actively working to make sure that history doesn't see Bukowski as nothing more than an average writer who lost all his skill in his later years, due to the meddling of a single stinking turd fly up in Santa Barbara. In the meantime, Harrison and his spineless ilk can line up little dutiful little soldiers and lick my balls.

Guess I'm in the dark. What evidence of "wholesale rape" do you refer to? Interested.

Reducing a poem over one page long, to a mere five short sentences ("big gray balloon things, heavy"), is far more than just "...trimmed passages, took out some words, changed a few things around as editors do". Martin completely changed the content of the poem, including the title (which then became, "Elephants In The Zoo"), so it does'nt make any sense anymore. It's now an unimportant, trivial, five sentence long poem. And that's just one example!
Besides, since when does an editor make such heavy editing of a poet's poems? Martin did more than edit the poem in question. He actually rewrote it!

And I don't like Harrison's derogatory way of describing people who criticize Martin's 'editing', as people who has too much time on their hands, as if their criticism are'nt well founded. It says more about Harrison than it does about Martin's critics, I think!
Last edited by a moderator: Dec 2, 2013

Ronnie said:
Guess I'm in the dark.
Click to expand...

You will bathe in the light of salvation soon enough, brother.

In the meantime pick up your copy of What Matters Most, go to this page, and everywhere you see "manuscript differs from collected version" read the manuscript against the published version and come to your own conclusion. Maybe you won't consider it rape. I do.
S

I'd offer Martin $100 a month for life to stop his special brand of editorship but too late for that - damage already done. Apparently Harrison is a fan of Bukowski as commodity, and not a fan of the writing itself. 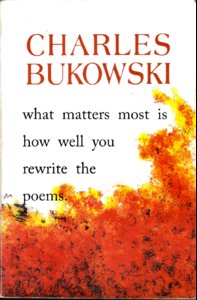 Man - that's a lot of butchery. I wish they are placed, side-by-side so we could see how much was tempered with. I think even one word changed would be too much.


It's true that over the years John trimmed passages, took out some words, changed a few things around as editors do and there are some with time on their hands to sit back and criticize him...​
[...]
Click to expand...

I'm curious to see the eBay listing. Can you post a link to it?

Thanks, hank. I especially liked this:

"John build the legendary independent press and Bukowski wrote up a storm and mailed things in."

"I just wish Martin himself had given us his own amazing life in his own words too."

Rekrab said:
"I just wish Martin himself had given us his own amazing life in his own words too."
Click to expand...

tell me about it.

unfortunately he's too busy trimming, taking some words out and "changing a few things around" (that's the best one)

ps - why does this guy kiss martin's ass so bad?

Here's a title for a critical study: "Bukowski Mailed It In."

I picture the amazing Martin autobiography as being at least 850 pages.

d gray said:
why does this guy kiss martin's ass so bad?
Click to expand...

10 years ago I could have answered that. Now, I have no idea.

Most of the people I know who have a "relationship" with Martin guard it jealously. It used to be that that was necessary if you wanted to buy items out of his collection, but now that he has no collection to sell, I'm not sure why the cloak and dagger act is necessary. Or why it's necessary to curry his favor at all, for anything.

I don't think some of these people realize how absurd it is to somehow suggest that he is beyond reproach because he was Bukowski's publisher. What's funny is when the carnage comes to light they will all line up to say they knew about it all along, and "oh, isn't it terrible...but surely it can't be Saint John's fault!" and their apologist behavior will continue.

Keep that in mind, because I'd lay odds that that's exactly what's going to happen. I fully expect that for everyone who reads about this stuff and agrees that it was wrong, there will be two others who do all they can to dismiss it, like our pal Scott. Regardless of how much evidence can be mounted.

and let's not forget this letter to carl weissner, where buk is complaining about martin's heavy hand:

"Sometimes I get rather sickened by some of Martin's acts and methods. I wish you were my god damned editor, but thank the gods at least that I have you for a translator, agent and friend. (oh yeah, John actually said, "Sometimes the typist gets bored and throws in something." Wonder if Faulkner and J. Joyce were bothered with that?)"

Martin is not a good editor. A good publisher, yes. He knows how to make money selling books, but has no real sense of literary quality. He is due credit for promoting Bukowski, but as Buk's editor, no.

Making a book available for wide purchase is only 1/2 the struggle. The hard part is writing something other people want to read...and, once you have and it's been published -- getting the word out.

To that end, I'd say Buk's tireless submissions to small press mags, his column, and Buk's live readings did more to generate interest then any ads ever could.

Absolutely, Hosh. Martin's best move was seeing Bukowski's selling potential and signing him up early (did they actually sign a contract?) before other publishers figured that out. Other than Buk, what writers have sold well for Black Sparrow Press? Diane Wakoski is one. And of course John Fante, who Martin only reprinted because Buk urged him to. The hundreds (or whatever the number is) of other writers published by BSP have not sold as well. You can still get the original BSP editions cheap, in many cases. Martin's "genius" was believing in Buk's appeal and betting everything he had on it. In the early days at least, the books sold mainly on the strength of Bukowski's small press reputation, and not because of Martin's advertizing efforts (although I'm sure that helped.) A lot of the success is also due to Barbara Martin's design skills. BSP books look great -- the papers, the covers, the colors. They look like they are worth the price.

In Bukowski's case, the word was already out on his genius as a writer before the books became available. There was a ready market waiting, and Martin recognized that and made himself the source. Buk made a name for himself in the small press and I don't think it was all that hard for Martin to sell the books.

Founding member
Of the first 50 Black Sparrow Press publications, only eight were Bukowski titles, and five of those were the miniscule broadside runs. In the beginning Martin bet on a number of writers. Bukowski is just the horse that finished in the money. But I think it's safe to say that Martin would have been just as happy if any of his other writers that no one has ever heard of had been the cash cow (inasmuch as BSP had a "cash cow" - a cash goat, maybe...much less milk).

If you look at the BSP bibliography, At Terror Street And Agony Way was not even the first sizable poetry collection Black Sparrow published - that was a 128 page book by Robert Kelly, published a few months before Terror Street. Its early history would seem to contradict the idea that BSP was created to publish Bukowski, as Martin later claimed.

Publisher, yes. Paperclip salesman, absolutely! Editor, no. I think we've all seen more than enough painful proof of that.

The Genius of the Crowd:
2

J
"Me Against the World"