This season [of SOA, not Boardwalk] seemed unfinished---nothing was really resolved.

A lot of fans didn't like the CIA twist but it was probably the best way to get them out of that situation since Sutter isn't ready to end the series. From reading his blog it does sound like it was a last minute thing since he'd painted himself into a corner. The twist doesn't really bug me so much as the story being setup to where there was just no way out of it other than just to come up with something out of left field.

I think it is not unheard of for CIA operatives/informants to be able to get away with a lot of shit compared to those of other agencies, or at least it wasn't that tough a sell for me as a viewer. I figure they can do a lot in the name of "national security."

Founding member
For future reference, you can now use the

Like so:
Soylent Green is people!
You'll have to type the tag though. Adding a button to the text editor is too complicated. 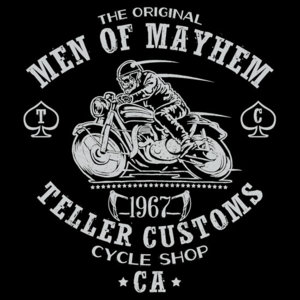 Not before the mentioning of 'SoA' in that other thread concerning our new little patches here I've seen this thread.

That'll teach me to ignore things *not* Bukowski.
FUCK!

mjp said:
Opie will probably die too.
Click to expand...

It took longer than I thought, but there you go. What a brutal scene.

my karmic revenge for illegally streaming SOA was having the major finale event spoiled by google search results AND YET it was still absolutely shocking. so vicious!

Founding member
Tell that deadbeat hippie you're married to to get a satellite dish for christ's sake. Tell him they have a channel about bicycles.

But yeah, RIP Tara. Now Jax is free to be a real beast for the final season. And behold, the blood will flow like a river down the streets of Charming. Selah.

Was'n it over when Tara went in hiding in a motel with her 2 children? I thought that the ending was a dud.
I also tried to find out if there was possibly one more episode because it didn't make sense after so much excitement. I read that Tara died but then I thought that these were speculations.
Just read about it.
I also missed the finale and can't watch it, it seems. :(
Last edited: Jan 9, 2014

Black Swan said:
Was'n it over when Tara went in hiding in a motel with her 2 children?
Click to expand...

No. That felt like a finale episode to me too, but I knew there was another after it.

You can buy the finale as a single episode on Google Play for $1.99...

Sorry! TV on Google Play is not available in your country yet.
We're working to bring the content you love to more countries as quickly as possible.
Please check back again soon. :fog:

I don't have the exact link right now but if you go to watch series dot com and search for SOA, there are good streaming links

I believe that I have seen all the episodes except that ending.

Black Swan said:
Sorry! TV on Google Play is not available in your country yet.
We're working to bring the content you love to more countries as quickly as possible.
Please check back again soon. :fog:
Click to expand...

Founding member
Is it September 9th yet? Founding member
Okay, I'm not going to spoil anything, except to say that I'm not buying the direction this final season is taking so far.

We are supposed to believe that Jax suddenly went from mastermind to moron, that he has no sneaking suspicions about his wife's murder, and can now be easily duped into believing pretty much anything.

That sort of flies in the face of the past six years, but what do I know.

We watched the last three episodes from last season before this one started, and I'm still traumatized by the Tara murder episode. Not so much her getting a meat fork stuck into her brain, but Jax finding her. Jesus christ.

SPOILERS FROM THE END OF LAST SEASON (where did the spoiler tags go, mjp??)


i buy it - think of all the awful shit gemma has done, that he has known about, and he's always forgiven her. think about the absolute loyalty the club puts above all else - and gemma is a big part of the club. he is way more ready to believe the chinese did it, then his own mother. things had just gotten right between him and tara, and for all it to come crashing down like it did, he's definitely not thinking straight. and he probably doesn't want to even entertain the thought of it being gemma because then he'd have to think about slicing her and salting the wounds and sticking a meat fork in her head.

justine said:
where did the spoiler tags go, mjp?
Click to expand...

I'm not saying he would necessarily look toward Gemma. But to not look anywhere...I don't know.

He knows Juice is a traitor, what about him? (Carol thinks Juice is the key to this final season and he's the one who is going to tell Jax what really happened.)

Just saying that it's out of character for him not to be working the angles.

yeah, given the way she died - clearly there was a struggle, and it seems like if it was really the chinese, they would have just shot her - he should be thinking more clearly about who did it. but he's also in shock and just wanting anyone to pay for it as soon as possible. but i also felt like it was implied at the end of the episode that he didn't feel it was over yet.

Founding member
Yeah, when he was looking a that kitchen...like he noticed something.

Either way, a war with the Chinese is not what I was hoping for in a final season. But there's still a way to go, so who knows what could happen. And how they are going to leave it at the end.

I thought that Gemma would want to get rid of Juice as soon as possible.

Founding member
She is trying to get rid of him (not permanently, yet), but he came back, didn't he. I think he wants to atone, or at least he doesn't want to be on the run for the rest of his life. But he's in a hard spot now. Again. He's tried to kill himself a few times, maybe he'll succeed now. And leave a note for Jax.

Or maybe he'll kill Jax, fuck his mother and take over the presidency of the club.

Sons is just about to wrap up, but I sure like how each episode gets longer as we get closer to the end. The scene with Jax and Juice in the prison was brutal (and completely without violence) - it reminded me of Jax finding Tara's body last year. That Hunnam kid - who knew he could act?

We've never re-watched any old episodes, so it will be nice to get the discs in a year or so and watch the whole thing again in two days. That could be trauma inducing to someone who isn't prepared. Luckily I'm always prepared for everything.

Founding member
"Jax, what happens at the end of the day?"
"The bad guys lose."

Founding member
It'll all be over soon. Moderator
It's only now that I realise these bikers are prominent members of The Forum.

zobraks said:
It's only now that I realise these bikers are prominent members of The Forum.
Click to expand...

And I still seem to be a "prospect". Some just never "make it". Season five (I think) just finished on the "cheap per view" regular cable channel up here in land north of the Washington chapter.

Founding member
You're very close to leaving prospect behind and getting your full patch.

Then you'll see how your life really changes. :die:

Founding member
And now the patches are doubly huge and doubly ridiculous!

Mainly because I wanted an excuse to figure out how to do images for the user titles.

Moderator
I don't know how exactly you Yankees call those posters with a villain's photo, reward in $$$ and "wanted dead or alive" on them, but now I feel as if I'm on one of those.
Blame it on the (huge western) font.

ok so i'm good with how this finally ended, and it wasn't quite what i expected, but the whole thing with that mysterious homeless woman, who's been around since s1, turning out to be some prophet, is some corny bullshit. and the final cgi with the crows was pretty cheap.

i think this show has gotten a lot of flak over the last couple of seasons for its treatment of race and misogyny and crime/murder, but the ending really shows that criticism up: yes, the audience sympathizes and roots for the club, but in the end it's plainly acknowledged that they're all bad guys, no matter what good things they might do - they're still killers.

Founding member
It ended as well as it could have. I wouldn't want to have to end something that a lot of people like. It's impossible to please everyone. Whatever you do half the audience is going to say it sucked.

Buy yeah, the bread and wine on the wall (last supper anyone?) and the crucifixion pose Jax went out in...and I thought the whole idea that he would prefer to go out that way rather than letting the club take him out - as they should have - didn't ring true and it was out of character. "I just want what's best for the club...so I'll leave you holding the bag while I go off and meet Jesus on my own terms." Sure.

And shit CGI, yes. The final scene of Jax and the truck looked like something from an Aaron Spelling show in the 1980s.

But overall, I can't gripe too much about it. At least they got to end it. Unlike Deadwood, unlike Carnivale, unlike Northern Exposure...

oh i actually was ok with him going out that way - he specifically says to chibs something like "i'd never put that on you". and there was always the thing that JT's death wasn't an accident or even murder, but rather suicide.

also: HAHA i couldn't fucking figure out that food thing! i totally missed that it was wine in that bottle (it looked like an ice tea bottle to me), and i kept wondering what the significance of the cake-looking thing with the pink stuff on it was.

Founding member
Well at least I was right about this:

mjp said:
Now Jax is free to be a real beast for the final season. And behold, the blood will flow like a river down the streets of Charming. Selah.
Click to expand...

mjp said:
[...] I wouldn't want to have to end something that a lot of people like. It's impossible to please everyone. Whatever you do half the audience is going to say it sucked. [...]
Click to expand...