Founding member
The omnipresent and omniscient ed(itor). Like JESUS, with a red pen.

mjp said:
I just got a call from ed, and was was wondering how it could be considered ignorant to point out that some limp rock band's lyrics are nothing at all like Bukowski's writing, and that you are an idiot if you believe they are.

I think it's a fair question that ed asks, but I wonder if you're too wound up and angsty to answer it. I worry about you.
Click to expand...

Ignorant to deny, edit/delete how a specific band dropped Bukowski's name or reference his stuff because they have a vendetta against 311 or to what you call "kiddie rock". If they didn't "reference his stuff" then I must obviously be as wrong as you claim me to be... Messengers don't like being shot...

Sorry for being an idiot, angsty and worrisome for you. I'll try harder next time, mommy dearest.

(Since you are four posts into this world, you may want to surf a bit, as the waves are pretty cool.)
Click to expand...

Internet insights can be greater than or equal to post counts.

I've always liked this forum and hope you'll all still have me.

JuanGris said:
If they didn't "reference his stuff" then I must obviously be as wrong as you claim me to be...
Click to expand...

I see. If they were referencing a Bukowski poem in those lyrics, I (um, I mean ed) misinterpreted your post. Mea culpa.

Catégorie Bukowski, a song from Vincent Delerm, a French singer belonging to what is called "La nouvelle scéne française" (an expression designating nowadays' artists perpetuating the tradition of "chanson française" )

I have no idea what that means.

rappers seem to take a shine to Hank.
M

sorry Ambreen im confused. there is a Nick cave n the bs song with a buk ref. i cant think of the name but the line is ''bukowski was a jerk..'' weird story; i had received a gift card for borders and picked up ''dig lazarus dig'' and on my way out spotted the docu ""born into this'' which i had to pay for with real money. when i got home and heard the line, after drinkin some beer and smokin some pot i was pleasantly shocked. at the coincidence of course

Hey Mikeypants. I believe that Nick Cave song is "We Call Upon The Author." Its actually discussed at great length in another thread somewhere in this forum, I just can't remember where. I also cant tell if it's a Buk insult, or just a line in a song. I am a big fan of both Buk and Cave, so hopefully not meant as an insult, but whatever, I still like them both.
M

Yeah nervas, i think that's right. I doubt it was an insult. I like buk but he sure comes off like a jerk sometimes. He'd probably think it was a compliment.

mikeypants said:
is that the song on ''Dig Lazarus Dig!!!''? ...he brings me a book on holocaust poetry and tells me to get ready for the rain...thanks doug
Click to expand...

If he's "another unknown frenchie", he couldn't be Nick Cave ! :D

Nervas is right, the song is We call upon the author.

It has been discussed here : https://bukowskiforum.com/showthread.php?t=5069&page=2

You can listen to it again here : ttp://profile.myspace.com/index.cfm?fuseaction=user.viewProfile&friendID=212434537

I believe he wouldn't even give a damm.
M

Thanks for the links Ambreen
R

There's a track by Fila Brazillia on their 1st album Old Code New Chaos in which Buk reads his poem The Light of Jesus.

EYEHATEGOD love a bit of buk, at the beginings he mentions him and the song is named after the poem

They entitled one song Love Is A Dog From Hell.

Dub Buk,
has anything to do with Buk?
I couldn't tell, sound like dogs from hell.

I saw them yesterday as a supporting band. I thought it was an umpteenth Myspace band when they came on stage, was expecting to get bored as I often do when hearing a supporting band but these kids turned out to be a very good surprise, I even happened to find their set too short ! They seduced me with their music reminding me of the Strokes. While looking at their Myspace to know more about them, I had another surprise : a famous picture of Bukowski in their "Influences" section. Definitely good kids !!!
Last edited by a moderator: Dec 2, 2013 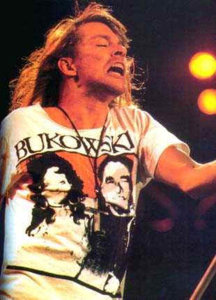 and I thought I knew soo much about gnr, don't ever remember that shot! nice one though, especially after reading Scarlett.

A long time ago, I saw a vid of the gig during which Axl Rose wore that tee-shirt on Youtube; he was performing Mr. Brownstone. I don't find it anymore now.

RIP
Thanks Ambreen for shareing the pic !

The german journalist Gundolf S. Freyermuth mentioned the shirt in his book "That's It." A Final Visit With Charles Bukowski.

I searched in the internet for many times but never found the pic, so thanks again.
Last edited by a moderator: Dec 2, 2013

I've finally found it again, + another one:

Mr. Brownstone
[This video is unavailable.]

Pretty tied up
[This video is unavailable.]
Last edited by a moderator: Dec 2, 2013
S

Thanks for posting this, Ambreen. Thanks, also, for the earlier pic.

RIP
WOW Thanks again for shareing!

Ambreen said:
[This video is unavailable.]
Click to expand...

This one has a moderator at the end talking about Bukowski being on the shirt. roni said:
This one has a moderator at the end talking about Bukowski being on the shirt.
Click to expand...


Well - I have changed my look since then :D

This is new to me. My mom actually attended Fairfax High with 3 of the 4 original members of the RHCP. Their music also introduced me to Buk back in 91, but someone on wikipedia wrote about Anthony Keidis: "As his musical tastes expanded and his outlook on life changed, and he matured, he began writing songs about a wider spectrum of subjects, his main literary influence is Charles Bukowski who touches on many of the similar issues and like Bukowski, Kiedis focuses on life in the city of Los Angeles and the state of California.[6]" The reference points to Anthony's auto-biography Scar Tissue as the source. I think I've read it twice, but now will have to re-read it to see if he actually mentions Buk, but I really don't think he did. Anyway, just saying and in any event, Anthony Keidis rocks as do the Chili Peppers!

I have no idea what that means.
Click to expand...

Just noticed this post and listened to the band.
Gingham is a type of fabric, something like the french tablecloth, with squares.
I think that she says Wide Weave Bukowski Gingham.
What does it mean in this song, I am not sure. Let's say you can only imagine what's on the blanks. It's not a band but I wouldn't create a new thread for that.

I have just heard about an upcoming French horror movie entitled La meute (The pack) in which one character, a retired cop, is called Chinaski.
Last edited by a moderator: Dec 2, 2013
This site has been archived and is no longer accepting new posts.
Share:
Facebook Twitter Reddit Pinterest Tumblr WhatsApp Email Share Link
Top