The young man pictured above is Willis Earl Beal. No idea what he sounds like but he's starting to get "buzz" in Chicago and obviously has great taste in T-shirts.

Hasn't he heard of the ipod?

That would be a great question to ask him. Also, "Bukowski was right... in general or something in particular ?"

number6horse said:
"Bukowski was right... in general or something in particular ?"
Click to expand...

Maybe Ben Pleasants has got into the novelty T-shirt market.

Founding member
Wouldn't a Pleasants t-shirt say something like, "BUKOWSKI MURDERED WHITE BABIES AND ATE THEIR HEARTS - I HAVE IT ON TAPE!"?

That could be a direct quote from the sniper.

The Alt-Country Band LUCERO has a song named CASS off the album Rebels, Rogues, and Sworn Brothers based onthe short story The Most Beautiful Girl in Town. Also, the band Two Cow Garage has a song called Skinny Legged Girl that references Bukowski. This is easier go here I've tagged all teh artist I've encountered that have made some reference to him: http://www.last.fm/user/Angeleyes_619/library/tags?tag=bukowski&view=cloud.

And I found the Band HWM because of the book. I was surprised how much I liked the band. They have bben my favorite band since. I have even met Chuck Ragan, (lead vocals,guitar) who is a pretty cool dude. I loved the book and band so much I tattooed the bands logo on me for both <3 He liked the tattoo.

Angeleyes619 said:
[...] I've tagged all teh artist I've encountered that have made some reference to him: http://www.last.fm/user/Angeleyes_619/library/tags?tag=bukowski&view=cloud.
Click to expand...

it seems, a band named 'Bukowski' will play at the 'Hellfestival' this year: 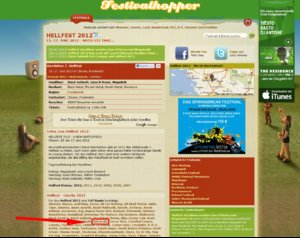 Founding member
I wonder if they'll play before or after Cancer Bats and Dying Fetus? The order of the bands makes all the difference when you have 147 hell bands to see.

Went to the Cancer Bats site cause I liked the name..When will this genre die-this screaming wailing sop of sound labelled as whatever they want to call punk now. It sucks not even people with the last name as the people in the band listen to this tripe given a choice.

And on the other side........ Read this. Where do they get the nerve???
Dying Fetus toured extensively for Stop at Nothing, and got airplay for the music video for "One Shot, One Kill" on Headbanger's Ball. Another tool that led to exposure of the band was more mainstream metal attention of Relapse Records (with acts such as Mastodon gaining popularity), as well as a full North American tour with GWAR in 2005. However, the Stop at Nothing lineup dissolved slightly in the years that followed as drummer Erik Sayenga parted yet again, and singer Vince Matthews went on to form Criminal Element. However, Dying Fetus came back yet again, bassist Beasely took over on vocals, and drummer Duane Timlin (ex-Divine Empire/Broken Hope) joined the ranks in 2006.
That lineup then recorded War of Attrition, which was released in March 2007. Themes include attacking reality TV, the war on terrorism, racial ignorance, and the flaws in the criminal justice system. Songs include "Homicidal Retribution," "Raping the System" and "Parasites of Catastrophe." Dying Fetus' second music video was made for "Homicidal Retribution."


I remember "Cancer Bat" was the name other ball players gave pitcher Jim Bouton, mostly because he couldn't hit. At least that's what I remember reading in the 1970 book Ball Four.

I was looking for a band named Bukowski that played the local hotel, The Admiral (hangout for Malcolm Lowry at one time), but came across this grill in the UK. http://www.bukowski-grill.co.uk/

Reminded me that Vancouver has had a bistro named Bukowski's for years. http://www.123vancouver.com/restaurants/bukowskis-bar-bistro.htm

There's also a Café Bukowski in Berlin (near Prenzlauer Berg).
Last edited by a moderator: Dec 24, 2013

This is totally off topic of music but I saw on the ninth episode of Californication that Karen, David Duchovney's love interest, was reading Buk's book Sifting Through the Madness. I heard that Hank Moody's character was pretty much based on Chinaski.

Austin Charles said:
This is totally off topic...
Click to expand...


Yeah. Please search before you start with these revelations.... Thanks. don't know, if this is any good.

Sad but true. That's why I didn't even translate the lyrics... they're as boring as the rest.


roni said:
it seems, a band named 'Bukowski' will play at the 'Hellfestival' this year:

The band Bukowski (as well as the Hellfest Festival) is French; I have already quoted them in this thread.

Ambreen said:
[...] I have already quoted them in this thread.
Click to expand...

A German band named 'Das Liebesleben der HyÃ¤ne' (='Love-Tale of the Hyena'), which is the German title of the novel 'Women'.

Here's a question and a tough one at that.
We all know, that Bono of U2 is a Bukowski-fan. He had invited Hank and Linda to a concert (which they attended) during their 'Achtung Baby'-Tour. On the following album he dedicated a song to Bukowski ('Dirty Day'). And there's another thing from the same time-period, that I've always wondered about:

On their 'Achtung Baby'&'Zooropa'-Tours, they had a sort of TV-channel with them, which they called ZOO-TV.

In 'Burning in Water' there are two poems, directly following each other, titled 'zoo' + 'tv'.

Pure coincidence? It's possible, but I'd find that a bit much of a 'chance'.
So: Does anyone of you know or has heared about that subject matter? Has Bono talked in an interview about the origin of the name 'Zoo-TV'? Anything?

The tour's concept was inspired by disparate television programming, the desensitising effect of mass media, and "morning zoo" radio shows.

there's a song by Bon Jovi titled 'It's just me' that has the line:

"...
That faded rose that's all dried out
Those Bukowski poems we couldn't live without
..."

I have watched most of Anthony Bourdain's shows Parts Unknown. He is a chef and a wonderful writer.He travels the world, is totally cool, irreverent and eats in all kinds of places where the food is exceptional.That could be in a dark little corner in India or in a fabulous restaurant where they discuss Paul Bocuse's french delicacies. He also seems to consume a lot of alcohol.
Anyway, one of the episodes was titled Anthony Bourdain visits the Mississippi Delta where he visited Faulkner's house, which is a museum and ended up in a bar getting slushed with a bunch of writers. He dropped the name of Bukowski as a great poet who could tolerate life with a drink.
Last edited: Jun 27, 2014

Yep, I saw that one too...Ol' Cool Tony also did a program about Tangiers and Burroughs...With those shades, he's a pretty cool cat. I'm surprised about what CNN lets him get away with, though there are lots of "bleeps"...Oh, and also one in Montana where he cooked with Jim Harrison...

Anthony Bourdain is always a good watch and he just went up a tick in my estimation.

Which makes me ask the question, does anyone know what reading this is from? That'd probably be hard to tell. I'm reading The Roominghouse Madrigals now and the version in my book is different than this reading.

not a good song, but mentions our man:

"You see through me
and you read me,
like a Charles Burkowski book
and I can't help myself but fall for your eyes."

Moderator
Founding member
Not my cup o' tea but this new track samples Bukowski reading 'The Genius of the Crowd' (right at the end, from about 3:20)

Uniform - The Killing of America

Greg Proops, being a comedian currently based in Los Angeles, name drops Bukowski and Fante from time to time. In a video special from Musso's, he referred to Buk and said, "No one knows what poetry is here in Hollywood because it isn't printed on money."
T

In the track six, walking in the snow, of their new album, Killer Mike mentions Buk.
Thought it was an interesting fact, just to let you know, fuckers.

I'm talking of Run the Jewels, by the way. RTJ4 is the album.

quote from article: "by.ALEXANDER dropped the project off earlier today featuring contributions by some of the most unlikely of collaborators including actor Gary Busey (seen on the cover art), poet Charles Bukowski and fashion icon Michèle Lamy."


Here's the song "BLOOM IN PARIS (feat. Charles Bukowski)" if you must: