The Location of Loujon Press (1 Viewer)

Later this year, my wife and I will be in New Orleans for a couple of days, and I've been trying to figure out where Loujon was located. This thread: https://bukowskiforum.com/showthread.php?835-loujon-press-nola-adress indicates that 618 Ursulines Ave. was the address for Outsider, but Royal Street is what I found elsewhere in my web search and, the link in poptop's post indicates Royal Street also; no mention of Ursulines Ave.

That's potentially very near where we'll be staying (Rue Toulouse). Anyone know any more details on the exact street address? I'll beat the pavement in either direction to hunt it out, so no matter there.

I'm assuming it's a residence now as it was then (or am I way off base?). I'd love to go in and take some photos if at all possible. The earlier thread I linked to suggests that access may be unlikely or impossible.

Purple Stickpin -- that's a great idea to track down the site. Please take a bunch of photos of the building and neighborhood and post them when you get back. Also, how about "Pirate's Alley" where Lou sold her paintings?

mjp, thanks. I've been caught up in the works DB and didn't know that all those letters are now in the manuscript section.

David, I'll see what I can do about Pirate's Alley. I've got a good number of bookstores to check out, bars to sit at, food to eat. But I'll get some photos of 1109 Rue Royale if I can get up close.

you may already know this, but there's a great bookstore in pirate's alley called faulkner house books. apparently faulkner used to live there and wrote the novel "soldier's pay" while staying there.
they have a decent buk selection and some rare stuff in glass cases. i picked up outsider 4/5 signed by jon and gypsy lou there. it was from ed blair's collection, when they were selling his stuff for him before he auctioned it all off to help out gypsy lou.

Ah, I thought Pirate's Alley sounded familiar, but I couldn't place it. Faulkner's is on my list, so I'll check it out.

what other places do you have on your list? just curious 'cause i used to live there...

Oh, good. You can help me weed out some places that may not be worth the time. Here are the bookstores I've listed so far, based on a quick review:

Do they have any good local pubs that brew their own beer?


For your sake I hope that they import their shrimp from Chile.

Given that shrimp are bottom-dwellers and the density of Mexican Gulf crude oil is around 0.85-0.98 that of water (considering source of crude and resultant evaporative loss), I'm cautiously optomistic that the shrimp population, particularly near Lake Ponchartrain, has not been significantly impacted.

But yeah; I did think of that and will be asking more questions when down there. Obama ate a local po' boy there three days ago.

I'd be more worried about the dispersant than the oil. From what I've read it's some pretty nasty shit.

My exact thought. Oil, schmoil -- but that dispersant will make you grow extra arms.

The good news is New Orleans has many good foods besides just seafood dishes and you can drink lots.

The people are nice too.

Purple Stickpin said:
Oh, good. You can help me weed out some places that may not be worth the time.
Click to expand...

not sure about brew pubs. we usually went to the same hangout and drank abita.
while in the quarter, you MUST check out this place:
http://www.agallery.com/

regarding po boys, most people will tell you this place is the best, and i wouldn't argue against it:
http://www.johnnyspoboy.com/

and this place is my all-time favorite restaurant in the city...or anywhere for that matter.
http://www.jacquesimoscafe.com/

Thanks for the recommendations, James.

And good point about the dispersant, Chronic.

mods, you deleted all (well, most) of my answers to PS. they were in the copy and paste thing. internets are confusin' to me. but they were there, i tell ya....

Founding member
Shit man, sorry - I did that. I thought it was just a quote.

And I was planning to write all of that down this weekend since I finally have some time after working so hard this week and all. But I suppose as long as mjp apologized to james, its cool.

it's all good brotha. i'll get back to it again when i have more time...

Thanks - don't knock yourself out. I've got a while before the trip.

Just back from four days in the French Quarter. Good food, good booze, good people and good books. Here are some photos associated with Loujon Press: Pirates Alley, 638 Royale, 1109 Royale and 618 Ursulines. This will take a couple of posts to accomodate:

The sign at the corner of St. Louis Cathedral: 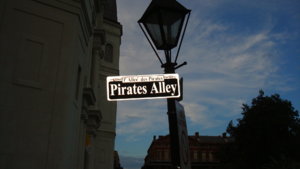 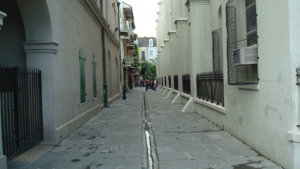 A detail of where Gypsy Lou displayed her art: 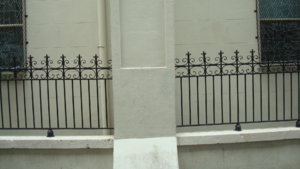 Where the selling is done nowadays (across from Pirates Alley on the border of Jackson Sq.): 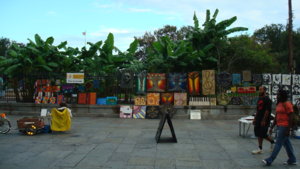 And some local homes that were associated with Loujon. 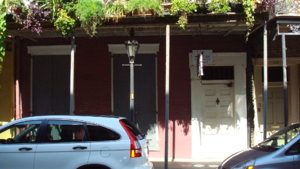 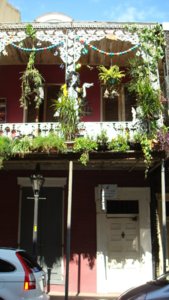 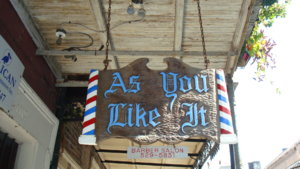 Well, 618 Rue Ursulines either no longer exists or is buried behind the gates in the following picture. 620 is to the right, and you can see that 616 is the establishment to the left: 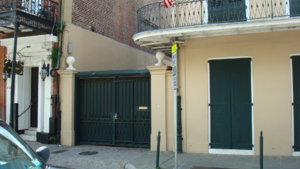 According to Jeff Weddle's book on Loujon Press, Outsider #1 was printed at 638 Rue Royale: 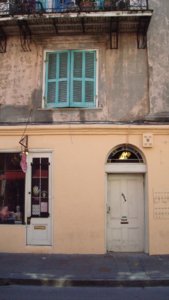 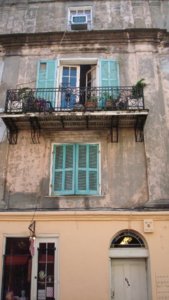 I will say this about the French Quarter: There is a sense of history that pervades every step you take, but for the most part, you need to use your imagination to really see what was. With a few exceptions, the quarter has been re-occupied and re-re-reoccupied in the past 30-40 years to the point where it is hard to find originality (much internal renovation is going on currently). While it is a nice neighborhood, it's over-run with trendy shit much like Salem, MA. Shame, really. The history is there, but you really need to have a treasure map to find the originality. Notable exceptions are the restaurants; many of them are dripping with history. As far as Loujoin history is concerned, it's very hard to find.

The bookstores I went to all stated that ever since Weddle's book, they can't keep any Outsiders or much of Bukowski in stock, even when it does come along.

Arcadian Books was constructed with used books as structural support beams. Not good, although if you have three days to deconstruct and reconstruct the stock, you may well find some great books. I got a headache in there after 10 minutes.

Beckham's Bookstore was a bit of a disappointment. A nice layout, but chock full of local info mostly.

The Faulkner House is an upscale bookstore located in Pirates Alley. The proprietor was very accomodating, but it's pricey.

My unequivocal recommendation is Dauphine Street Books at 410 Dauphine Street. Well organized for a smallish store that probably has 50,000 books, and all of the books can be viewed (ask for help for some!) and the proprietor was super-helpful. I felt very much at home here, and found some very nice books for reasonable, but not super-low prices.

Purple Stickpin said:
With a few exceptions, the quarter has been re-occupied and re-re-reoccupied in the past 30-40 years to the point where it is hard to find originality (much internal renovation is going on currently).
Click to expand...

I was there 17 or 18 years ago, and I had the same feeling. Everything around you is old, but it's all hokey, somehow. I'm sure it's worse since Katrina wiped the slate clean down there.

Outside of the Quarter though, there were streets you could walk down that looked like they hadn't changed in 100 years.

ps -- thanks for the photos. I've found the same thing searching for history in old cities like NY, Chicago, Salem MA, Boston -- addresses disappear (building torn down down?) or renumbered, buildings remodelled and ruined, streets renamed or diasppeared. What you end up finding is mostly traces or sites where something once was and nothing is now. But when you find an original untouched site, it's magic.

On a trip to NO a few weeks ago, I wanted to find the location in Pirates Ally where Gypsy Lou Webb displayed and sold her paintings. I have no idea why I needed to know where it was so precisely, but I did and I found it.
Compare the horizontal crack or line in the ledger above her black portfolio in picture #1 (from a google search) with the crack in picture #2 from May of this year. Still the same after 57 years. Looks like perhaps some of the slate tiles have been replaced though and perhaps cleaned up the stone and concrete a little bit. The location (if any one cares) is 29 deg 57.48 min North latitude and 90 deg 3.84 min West longitude. Or in simpler terms it's in Pirates Alley, 10 yards towards Jackson square from Faulkner House Books. 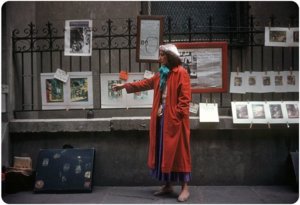 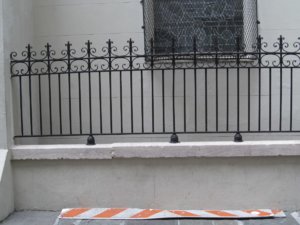 You nailed it, nado. Great job of finding the exact spot.

It seems to me that she moved around a bit.

Here she is in that exact spot: 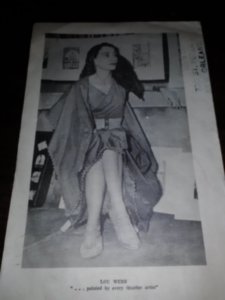 This is not a postcard OF her, but she seems to have made her way into it... 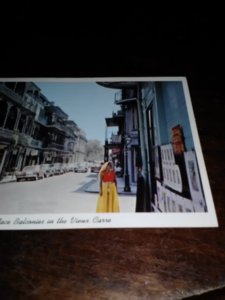 Cool, Bill. I don't remember having seen that second photo before.

It is a postcard that I got on ebay a while back. Not tough to find, but as gypsy lou is not listed, it takes a bit of looking. Still, they don;t sell for much, so that is nice...

There's one on right now. I'm tempted, but money is tight at the moment. I'll get one later when the budget allows.

I'm returning to Nola in August if there are photos that are needed to add to the great stuff here.