Bukowski-Exhibition in Germany in summer 2014 (1 Viewer)

I believe you are holding a San Francisco Review. 1959? Also a Coastlines in the other hand from 1965?

roni said:
which specific items can you spot in this picture?
Click to expand...

Is this the The Emperor's New Clothes kind of routine? :confused:
Last edited: Jan 10, 2018

Ponder said:
another outsider, a yearbook,
Click to expand...

skiroomalum said:
San Francisco Review. 1959? Also a Coastlines in the other hand from 1965?
Click to expand...

hoochmonkey9 said:
lower right is the 'confessions...' thing from OLE.
Click to expand...


anything else?
maybe if you see the table (with slightly different items and in different order) from a better angle? zobraks said:
Is this the The Emperor's New Clothes kind of routine?
Click to expand...

Founding member
BACK TO THE MACHINEGUN!!!

Ain't that the LA High yearbook, the winter edition, 1939? And the Buk tribute second coming.

d gray said:
BACK TO THE MACHINEGUN!!!
Click to expand...

both. the winter and the summer edition.

Now, is this a line-up or What?

d gray said:
BACK TO THE MACHINEGUN!!!
Click to expand...

roni said:
Now, is this a line-up or What?
Click to expand...

Reaper Crew
Moderator
Hey, I see the picture now!
But it's upside down :acb:: 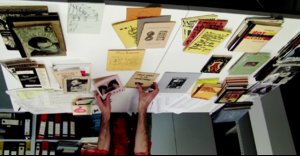 we Do have a German First of Fuck Machine, but it's not been on this pic. zobraks said:
Hey, I see the picture now! But it's upside down
Click to expand...

that's an improvement. now turn your monitor 180° and everything's fine.

All right, I did that and some parts fell out. Is that OK?

these two seem to be tough cookies to spot.
the experts please? hint #2:
what are the other 2 items just there?

hint #3:
of what exceptional material could this cover possibly be made?
Last edited: May 23, 2014 Looking at the pic now, I seem to see, where you thought you'd spot the German 'Fuck-Machine', being yellow with a white sqare on the cover.
Damn, how you deserve to be titled as 'The New Sherlock'! these two have been publications in the GDR (German Democratic Republic) [ = East-Germany =DDR] at the times of communism.

That's what makes them so special:
it's been extremely unusual for the GDR-times, to let an author, who is Against All Autocratic state-power, speak out. (But then - they sure could use his rants against the bosses.)

What's the ~6"x6" chap w/ what appears to be a reproduced signature near the stack of Wormwoods?

that's a catalog by 'House of Books' (1994) listing the Ed Blair collection for sale. yes, there are obviously also musicians (Chet Baker) and painters (Jasper Johns) in the 'Literary-Times'. [so you wouldn't take the "Literary" literally.]

Founding member
You can read the interview (his first) here.

mjp said:
You can read the interview (his first) here.
Click to expand...

Kaye: This is a corny question. Who is the greatest living poet?

Bukowski: That is not corny. That is tough. Well, we have Ezra...Pound, and we have T.S.,[Eliot] but they've both stopped writing. Of the producing poets, I would say...Oh, Larry Eigner.

mjp said:
You can read the interview (his first) here.
Click to expand...

Reaper Crew
Moderator
If you prefer to read offline, holding a (pretty heavy) book (and sniffing the paper

I guess us cold dogs in the courtyard do like to sniff books.

it's hard to impress you kids.

a drawing he did during visiting his town of birth: Andernach (Germany) in 1978: no, that was just my way of labeling the items to catalog them. This one was #60. It's been removed since.

here's me talking at the opening:

What's with the hands in the 3rd photo?:p

btw HERE's a short trailer to our Bukowski-Exhibition.

Very well put together, Roni.
The music was very well chosen too.
What was it?

New Bukowski exhibition at the Huntington in LA
2